I'm certain I'm not the only young man or woman whose budding interest in poetry was quickened by happening upon the following lines:
April is the cruellest month, breeding
Lilacs out of the dead land, mixing
Memory and desire, stirring
Dull roots with spring rain.
T. S. Eliot, The Waste Land (Boni and Liveright 1922).
I seem to recall that the presence of April, my birth month, played some role in why I was smitten with the lines.  But I could be misremembering.  On the other hand, I was a melancholy, bookish lad (some things never change), so I suspect my recollection may be accurate.  In any case, the lines have remained with me for nearly fifty years, even though my affections have long since migrated from The Waste Land to Four Quartets.
All of which leads (in a roundabout fashion), dear ever-patient readers, to our annual visit to my favorite April poem:
Wet Evening in April
The birds sang in the wet trees
And as I listened to them it was a hundred years from now
And I was dead and someone else was listening to them.
But I was glad I had recorded for him the melancholy.
Patrick Kavanagh, Collected Poems (edited by Antoinette Quinn) (Penguin 2004).  The poem was originally published on April 19, 1952, in Kavanagh's Weekly.  Ibid, page 280. 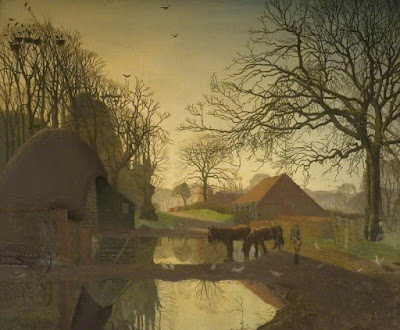 Allan Gwynne-Jones (1892-1982), "Spring Evening, Froxfield"
I suppose one might argue that "Wet Evening in April" is not a true "April poem" at all.  One expects something along these lines: "Loveliest of trees, the cherry now/Is hung with bloom along the bough . . ."  Or something even more effulgent and, yes, flowery:
April, 1885
Wanton with long delay the gay spring leaping cometh;
The blackthorn starreth now his bough on the eve of May:
All day in the sweet box-tree the bee for pleasure hummeth:
The cuckoo sends afloat his note on the air all day.
Now dewy nights again and rain in gentle shower
At root of tree and flower have quenched the winter's drouth.
On high the hot sun smiles, and banks of cloud uptower
In bulging heads that crowd for miles the dazzling south.
Robert Bridges, The Shorter Poems (George Bell & Sons 1890). Caught up in his enthusiasm for the month, Bridges includes sprightly internal rhymes within the first five lines.
Or perhaps something more restrained, but still evocative of the month's beautiful and hopeful course:
April
Exactly: where the winter was
The spring has come: I see her now
In the fields, and as she goes
The flowers spring, nobody knows how.
C. H. Sisson, What and Who (Carcanet Press 1994).
Mind you, I am quite fond of each of these poems, and they have appeared here on more than one occasion.  Still, April would not be April without its characteristic tinge of melancholy.  All of those cherry, plum, and pear petals drifting down beneath a blue sky, carpeting the green grass and the sidewalks.  It's wonderful how April and October share a similar bittersweet wistfulness and wistful bittersweetness, isn't it?  Every six months, year after year, the falling of petals and the falling of leaves.  Trying to tell us something. 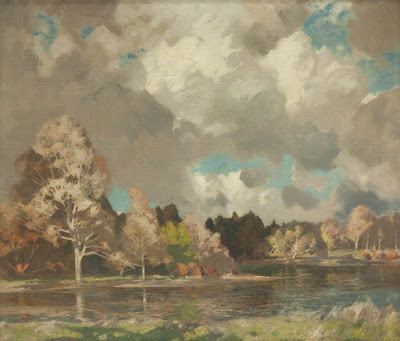 William Wood (1877-1958), "April Weather"
Ah, well, everything in the World and in our life eventually comes around to our evanescence, and the evanescence of the beautiful particulars that surround us.  "But it is a sort of April weather life that we lead in this world.  A little sunshine is generally the prelude to a storm."  (William Cowper, letter to Walter Bagot (January 3, 1787), in James King and Charles Ryskamp (editors), The Letters and Prose Writings of William Cowper, Volume III: Letters 1787-1791 (Oxford University Press 1982), pages 5-6.)  This is lovely, but perhaps too dramatic.  Life is a matter of petals and of leaves.  And of gratitude.
Pear Blossoms by the Eastern Palisade
Pear blossoms pale white, willows deep green —
when willow fluff scatters, falling blossoms will fill the town.
Snowy boughs by the eastern palisade set me pondering —
in a lifetime how many springs do we see?
Su Tung-p'o (1036-1101) (translated by Burton Watson), in Burton Watson, Selected Poems of Su Tung-p'o (Copper Canyon Press 1994), page 68. 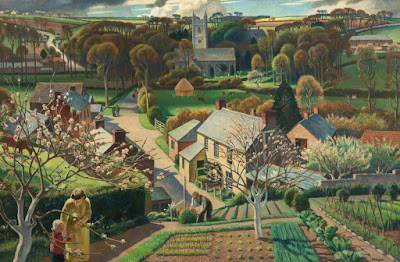 Wonderful collection of April poems, thanks you.

And what of this:

Spring
BY GERARD MANLEY HOPKINS
Nothing is so beautiful as Spring –
When weeds, in wheels, shoot long and lovely and lush;
Thrush’s eggs look little low heavens, and thrush
Through the echoing timber does so rinse and wring
The ear, it strikes like lightnings to hear him sing;
The glassy peartree leaves and blooms, they brush
The descending blue; that blue is all in a rush
With richness; the racing lambs too have fair their fling.

What is all this juice and all this joy?
A strain of the earth’s sweet being in the beginning
In Eden garden. – Have, get, before it cloy,
Before it cloud, Christ, lord, and sour with sinning,
Innocent mind and Mayday in girl and boy,
Most, O maid’s child, thy choice and worthy the winning.

hart: You're welcome. I'm pleased you liked the poems. As ever, thank you very much for visiting.

Bruce: Thank you very much for sharing Hopkins' poem. It fits perfectly with the other poems. It is also apt that, given the friendship between Hopkins and Bridges, they each have a poem here. Although they had disagreements about matters of prosody over the years, the feeling of the two poems is a bit similar, I think (of course, Hopkins provides a religious element not found in Bridges' poem).

I particularly like "A strain of the earth's sweet being in the beginning/In Eden garden." That reminds me of Dickinson a bit. (Although I defer to you when it comes to matters relating to Dickinson!)

I hope that all is well with you and your loved ones. As always, it's a pleasure to hear from you. Thank you for sharing the poem, and for stopping by.

April brings to mind a painting by Arthur Hughes I saw at the Tate "nearly fifty years" ago, entitled April Love. That vivid purple is still with me. It must have been on the same trip that I bought my much-treasured light blue volume of Four Quartets. Whenever I open it, out fall imaginary, but no less heady, rose-leaves from the garden "down the passage which we did not take."

Esther: Your quotation from "Burnt Norton" prompted me to take down my copy of Four Quartets. It has been far too long since I last visited it. And your reference to Arthur Hughes prompted me to look for "April Love" in a book I have about the Pre-Raphaelites. Sure enough, there it was: the purple dress. The diaphanous (how did he do that!) blue-purple shawl she is wearing around her shoulders and the vivid green leaves around the doorway are lovely as well. Thank you for pointing out the painting. The colors of the Pre-Raphaelites are always wonderful.

As ever, thank you very much for visiting and for sharing your thoughts.

However one takes the meaning of "April is the cruelest month," it has been an admixture of bitter and sweet for me this year. I lost three friends, all full of years, as I am. Another younger Japanese friend gave birth to a child in April, and gave her the lovely name, Sakura (cherry blossom).

It was 49 Aprils ago that I was luxuriating in the cherry blossoms in Japan, when my ship was suddenly called back to Vietnam to counter what has become known as the "Easter Offensive", when 30,000 North Vietnamese troops crossed the Demilitarized Zone into South Vietnam. This was the largest battle since the Korean War and lasted for six months.

And thank you to reader Bruce for posting the Hopkins poem. I especially liked these lines:

"The glassy peartree leaves and blooms, they brush
The descending blue; that blue is all in a rush
With richness;"

Here in New York City we have had one May Day -- the rest of the month has still been April, a chilly cloudy changeable April at that. But the lilacs are in bloom -- I went to see them across town on the one lovely day.
I too have been reading Four Quartets -- I picked my son's copy out of the bookshelf the other day.
I found "April Love" on the internet. A charming painting, but for someone my age it is impossible not to associate the phrase with Pat Boone's song, wildly popular when I was a teenager.
I've enjoyed your April poems & paintings very much indeed, Susan

Mr. Guirl: Thank you for sharing your thoughts of Aprils present and past -- as you say, both bitter and sweet. This growing old business brings its share of both, doesn't it? I'm sorry to hear of your losses. And from cherry blossoms in Japan to the seas off Vietnam. "A little sunshine is generally the prelude to a storm." But, as you suggest, there are compensations as well. The child named Sakura (indeed a lovely name -- there are many such in Japanese, as I'm sure you know) reminded me of a documentary about the 2011 tsunami I watched on NHK World this past week. It was about a photographer whose town was destroyed, and who has documented the recovery over the past 10 years. One of his most treasured photos is one he took of the tiny hand of an infant born several months after the tsunami cradled in the hands of her parents.

The poem shared by Bruce is a fine one, isn't it? ". . . that blue is all in a rush/with richness" is wonderful.

It's good to hear from you, as ever. Thank you very much for stopping by. I hope that all is well with you and your loved ones.

Susan: I'm happy to hear from you. I always like hearing your seasonal thoughts and reports. Ah, the lilacs. One of my favorite arrivals of spring. I'm pleased to hear you were able to get out to enjoy them.

Four Quartets is wonderful, isn't it? I suspect that many of us find that it grows more and more meaningful and beautiful as we grow older. At least that's how it is with me. At one point in my life I obtained a number of books about the poem in order to solve some of its puzzles. I'm not certain that was a wise thing to do. Still, I sometimes refer to them when I return to it. One of the best books about it (and about Eliot in general) is, in my opinion, Helen Gardner's The Art of T. S. Eliot (1949) (which you are likely familiar with). At one point she writes: "The whole poem in its unity declares more eloquently than any single line or passage that truth is not the final answer to a calculation, nor the last stage of an argument, nor something told us once and for all, which we spend the rest of our life proving by examples. The subject of Four Quartets is the truth which is inseparable from the way and the life in which we find it." (Pages 56-57, at the end of the chapter titled "The Music of Four Quartets.")

Thank you for the reference to the song sung by Pat Boone: I found a video of him singing it in 1957 (the year it was popular, apparently). The year of my second April.

I hope that all is well with you, and continues that way. Thank you very much for visiting. Take care.