How to Live, Part Thirty-Two: River

Human nature being what it is, the world has always been, and will always be, beset with utopian busybodies who have taken leave of their senses.  (As ever, I draw a strict distinction between the lower-case "world" in which we find ourselves by historical circumstance, and the upper-case "World" of Beauty, Truth, and Immanence.  More on this crucial distinction anon.)  I trust, dear readers, that you know of whom I speak: the new Puritans who, imagining themselves to have attained the highest stage of enlightenment, now presume to re-educate the rest of us, whether we like it or not.
Because I am in the autumn (or is it, perhaps, winter?) of my life, I should be able to view this state of affairs from an Olympian height, having seen it all before -- to wit, yet another case study in human pathology and folly ("extraordinary popular delusions and the madness of crowds").  Still, I confess that there are times when the effrontery, ignorance, bad faith, and mean-spiritedness of it all tries my patience.  When this happens, one can always turn to poetry for perspective.
Leave Them Alone
There's nothing happening that you hate
That's really worthwhile slamming;
Be patient.  If you only wait
You'll see time gently damning
Newspaper bedlamites who raised
Each day the devil's howl,
Versifiers who had seized
The poet's begging bowl.
The whole hysterical passing show
The hour apotheosized
Into a cul-de-sac will go
And be not even despised.
Patrick Kavanagh, Collected Poems (edited by Antoinette Quinn) (Penguin 2005), page 158.  The poem was first published in May of 1950.  Ibid, page 277.
But is Kavanagh being too sanguine?  A poem by another Irish poet is worth considering as well.
The Pier
Only a placid sea, and
A pier where no boat comes,
But people stand at the end
And spit into the water,
Dimpling it, and watch a dog
That chins and churns back to land.
I had come here to see
Humbug embark, deported,
Protected from the crowd.
But he has not come today.
And anyway there is no boat
To take him.  And no one cares.
So Humbug still walks our land
On stilts, is still looked up to.
W. R. Rodgers, Awake! and Other Poems (Secker & Warburg 1941), page 10.
Yes, I'm afraid that Humbug will always be with us.  On the other hand, leaving the purveyors of Humbug alone is sound advice.  This is where the "World" versus "world" distinction comes in. 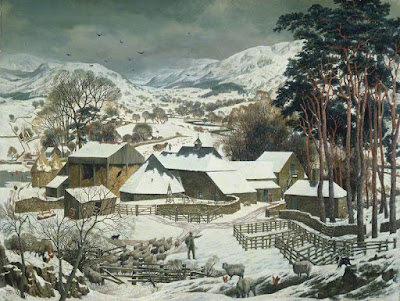 James McIntosh Patrick (1907-1998), "The Ettrick Shepherd" (1936)
W. H. Auden devoted a great deal of attention to the Humbug that walks the modern world on stilts.  This attention was always present in his poems, but it took a turn in the 1940s, as he moved away from the political preoccupations of his younger years, with religion taking on more importance in both his life and poetry.  I don't intend to undertake an examination of Auden's complex views on the state in which humanity found itself in the 20th century.  However, I do think that many of the poems he wrote in the latter half of his life (particularly in the 1950s) can help us to place into perspective the antics (or is "depredations" the better word?) of our current clan of self-anointed saviors and inquisitors.
The History of Truth
In that ago when being was believing,
Truth was the most of many credibles,
More first, more always, than a bat-winged lion,
A fish-tailed dog or eagle-headed fish,
The least like mortals, doubted by their deaths.
Truth was their model as they strove to build
A world of lasting objects to believe in,
Without believing earthernware and legend,
Archway and song, were truthful or untruthful:
The Truth was there already to be true.
This while when, practical like paper-dishes,
Truth is convertible to kilowatts,
Our last to do by is an anti-model,
Some untruth anyone can give the lie to,
A nothing no one need believe is there.
W. H. Auden, The Complete Works of W. H. Auden: Poems, Volume II: 1940-1973 (edited by Edward Mendelson) (Princeton University Press 2022), pages 485-486.  The poem was likely written in 1958. Ibid, page 987.  Auden preferred "the uncommon alternative form 'earthernware' [line 8] to 'earthenware'."  Ibid.
An earlier poem by Auden complements "The History of Truth" quite well:
The Chimeras
Absence of heart -- as in public buildings,
Absence of mind -- as in public speeches,
Absence of worth -- as in goods intended for the public,
Are telltale signs that a chimera has just dined
On someone else; of him, poor foolish fellow,
Not a scrap is left, not even his name.
Indescribable -- being neither this nor that,
Uncountable -- being any number,
Unreal -- being anything but what they are,
And ugly customers for someone to encounter,
It is our fault entirely if we do;
They cannot touch us; it is we who will touch them.
Curious from wantonness -- to see what they are like,
Cruel from fear -- to put a stop to them,
Incredulous from conceit -- to prove they cannot be,
We prod or kick or measure and are lost:
The stronger we are the sooner all is over;
It is our strength with which they gobble us up.
If someone, being chaste, brave, humble,
Get by them safely, he is still in danger,
With pity remembering what once they were,
Of turning back to help them.  Don't.
What they were once was what they would not be;
Not liking what they are not is what now they are.
No one can help them; walk on, keep on walking,
And do not let your goodness self-deceive you:
It is good that they are but not that they are thus.
W. H. Auden, Ibid, pages 375-376.  The poem was written in 1950 in Forio, on the island of Ischia.  Ibid, p. 934.  [As I have mentioned in the past, one of my two fundamental poetical principles is: Explanation and explication are the death of poetry.  But I sometimes violate that principle.  Hence, for anyone who may be interested, I recommend James F. G. Weldon's article "The Infernal Present: Auden's Use of Inferno III in 'The Chimeras,'" which appears in Quaderni d'italianistica, Volume V, No. 1 (1984), pages 97-109.  Weldon persuasively argues that "The Chimeras" echoes Canto III of Dante's Inferno in both text and theme.] 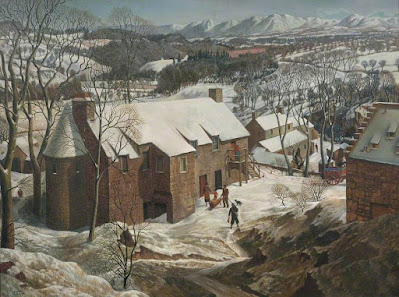 James McIntosh Patrick, "Winter in Angus" (1935)
What, then, is one to do?  As Auden suggests, we should "walk on, keep on walking."  The chimeras -- having nothing to do with Truth (or with Beauty) -- are best left to their fate.  As a baby boomer who grew up with the music of the Sixties and Seventies, these lines come to mind:
It was then that I knew I'd had enough,
Burned my credit card for fuel,
Headed out to where the pavement turns to sand.
With the one-way ticket to the land of truth
And my suitcase in my hand,
How I lost my friends I still don't understand.
Neil Young, "Thrasher," from Neil Young and Crazy Horse, Rust Never Sleeps (1979).
The hermetic life does have a certain appeal.  In my daydreams I can imagine nothing better than to spend my remaining days in a seacoast town or mountain village in Japan, watching the seasons come and go.  But burning one's credit cards for fuel and leaving the pavement behind is not a practical alternative.  Nor do I have the fortitude to become an eremite.
But, most importantly, isn't what a hermit longingly seeks right in front of us at this moment?
On the day after New Year's Day, I was startled to come upon a woolly bear caterpillar making its way across the pathway down which I walked.  In the grey light of the January afternoon its black and dark burnt-orange colors were striking -- seeming more vivid and more beautiful than usual, given the circumstances.  Because the pathway is frequented by both walkers and bicyclists, I picked the traveller up (it immediately rolled itself into a protective ball) and laid it among some fallen leaves beside the trunk of a nearby tree. (As I have noted here in the past, I am not seeking credit for this: it is something we all do.)  Woolly bears hibernate over the winter, so I wondered why it was out for a stroll at this time of year.  But what do I know?
The River
Stir not, whisper not,
Trouble not the giver
Of quiet who gives
This calm-flowing river,
Whose whispering willows,
Whose murmuring reeds
Make silence more still
Than the thought it breeds,
Until thought drops down
From the motionless mind
Like a quiet brown leaf
Without any wind;
It falls on the river
And floats with its flowing,
Unhurrying still
Past caring, past knowing.
Ask not, answer not,
Trouble not the giver
Of quiet who gives
This calm-flowing river.
Patrick MacDonogh, Poems (edited by Derek Mahon) (The Gallery Press 2001), page 86.
"This calm-flowing river."  A woolly bear caterpillar unexpectedly appears, bright and beautiful, in the midst of winter.  The chimeras are nowhere to be found.  Therein lies the distinction between the World and the world.
The River
And the cobbled water
Of the stream with the trout's indelible
Shadows that winter
Has not erased -- I walk it
Again under a clean
Sky with the fish, speckled like thrushes,
Silently singing among the weed's
Branches.
I bring the heart
Not the mind to the interpretation
Of their music, letting the stream
Comb me, feeling it fresh
In my veins, revisiting the sources
That are as near now
As on the morning I set out from them.
R. S. Thomas,  H'm (Macmillan 1972), page 23. 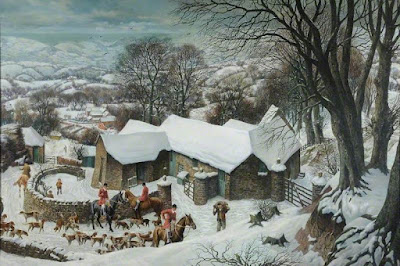 James Mcintosh Patrick, "An Exmoor Farm" (1938)
One afternoon last week I walked down a different path, through a narrow meadow bordered on both sides by groves of pine trees.  My bird companions in winter are small flocks of chattering robins and sparrows who make their accustomed rounds throughout the day. But the meadow and trees were silent as I walked.  Suddenly, a single dove flew out of a bush to my left, landed on the path in front of me, hopped along the path for a few feet, and then flew off into the meadow.
In the depths of night --
The sound of the river flowing on,
And the moonlight
Shining clear above the village
Of Mizuno in Yamashiro.
Tonna (1289-1372) (translated by Robert Brower and Steven Carter), in Robert Brower and Steven Carter, Conversations with Shōtetsu (Shōtetsu Monogatari) (Center for Japanese Studies, The University of Michigan 1992), page 120. 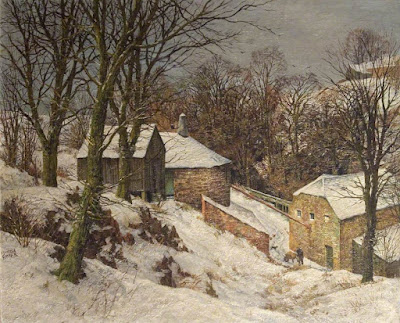 James McIntosh Patrick, "Arbirlot Mill, Near Arbroath"
Posted by Stephen Pentz at 1:10 AM

After reading Ellul's The Technological Society, I was lamenting to a priest friend of mine about the impossibility of escape from this Machine, as others have called it, the un-civilization that we live and breathe, and which entangles us constantly. He said I was wrong, there is one place it cannot encroach: the human heart.

Thanks to you and your caterpillar! <3

GretchenJoanna: Thank you for sharing your thoughts. I'm pleased you liked the post (and the caterpillar!).

Thank you so much for sharing the quote from your friend, which is lovely and perfect.

I appreciate the reference to Ellul and his book The Technological Society, neither of which I was aware of. I have now done a bit of internet research: his views on technology and the modern world are right on point. Auden's thoughts on our times (in both his prose and poetry) parallel Ellul's to some extent. I was interested to find that Ellul was influenced by Kierkegaard and Karl Barth. Auden was quite interested in Kierkegaard as well.