I'd like to stay with the subject of "fair after foul weather" for a moment longer.  The following two poems are about unexpected illuminations in a literal sense.  But there are other dimensions implied as well. 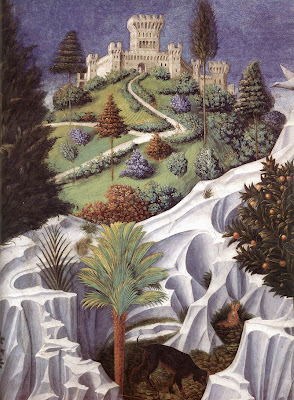 Illumination: On the Track by Loch Fewin

Suddenly the sun poured
through an arrow-slit in the clouds
and the great hall we walked in -- its tapestries
of mountains and parquet of rich
bogland and water -- blazed on the eye
like the Book of Kells.

For four days a cloud
had sat like a lid on the round
horizon.  But now
we walked in a mediaeval manuscript --
doves flew over the thorn, the serpent
of wisdom whispered
in our skulls and our hands
were transparent with love. 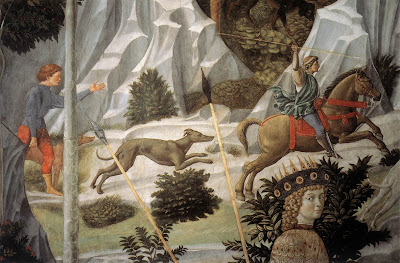 Benozzo Gozzoli, "The Journey of the Magi" (detail)

The following poem by R. S. Thomas (which has appeared here before, but which is worth revisiting) is remarkably similar to MacCaig's poem both in atmosphere (although the setting is Wales, not Scotland) and in spirit. (And not solely because the word "illumination" appears in one poem, while the word "illuminate" appears in the other!)  It is, I think, one of Thomas's finest poems. 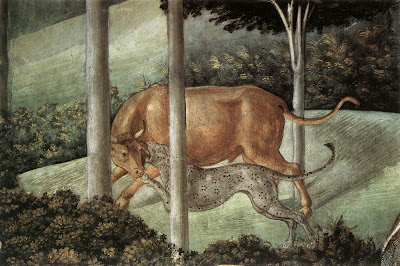 Benozzo Gozzoli, "The Journey of the Magi" (detail) 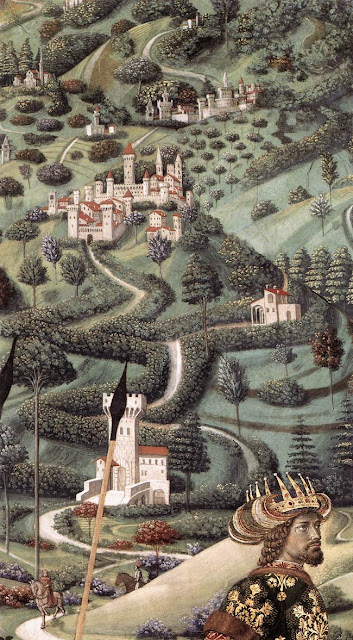 Benozzo Gozzoli, "The Journey of the Magi" (detail)
Posted by Stephen Pentz at 12:10 AM

Thank you for today's "bright field".In case you don't know it, I came to Norman MacCaig after reading Andrew Greig's "At the Loch of the Green Corrie"and am sure you would like it.

deborah: thank you for stopping by again, and for the reference to Andrew Greig's book: I wasn't aware of it. I have since looked at the excerpts that appear on Amazon, and I will have to get a copy -- especially given the tie-in with MacCaig, and the fact that he wrote so many poems set in Assynt.

Thank you very much!