In his "Whisper of a Thin Ghost" (which appeared in my previous post),   A. S. J. Tessimond warns us against living life in a "Coat of Caution" and of heeding the advice of "the books of the Careful-Wise."  Easier said than done, of course.  Nonetheless, I can see what Tessimond is getting at.  The following poem provides, I think, a good companion-piece to "Whisper of a Thin Ghost," for it considers the cost of what-might-have-been.

Let funeral marches play,
Let heartbreak-music sound
For the half-death, not the whole;
For the unperceived slow soiling;
For the sleeping before evening;
For what, but for a breath,
But for an inch one way,
The shifting of a scene,
A closed or opened door,
A word less, a word more,
Might have, so simply, been.

The final tragedies are,
Not the bright light dashed out,
Not the gold glory smashed
Like a lamp upon the floor,
But the guttering away,
The seep, the gradual grey,
The unnoticed, without-haste-
Or-protest, premature,
Unwept, unwritten waste. I suppose that the "message" of this poem might be: carpe diem!  However, I'm not sure if it is that simple.  I detect a sense that these "half-deaths," these things missed by "a word less, a word more," might not have been salvageable by attempting to seize the day.  It may be that ending up with a certain amount of "unwept waste" is part of what it means to be human. But perhaps I am being too pessimistic.  Then again . . . 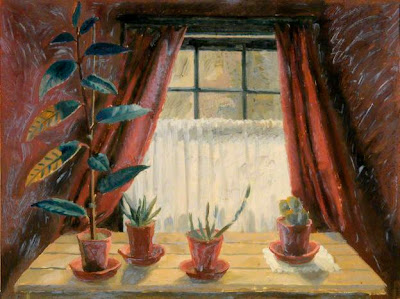 Charles Mahoney, "The Plant Table"
Posted by Stephen Pentz at 12:10 AM

What's the difference between being pessimistic and realistic?

I once read that luck is being ready when the opportunity comes--but what if that opportunity never comes--an inch, a door open or closed, a word said or never said.

In the second section of the poem, I see much that happens as a result of aging, especially in old age.

I care for my octogenarian parents and find the poets words apt and true.

Fred: excellent point. I tend to go back and forth: I castigate myself for being too pessimistic; however, I soon take it back and tell myself that I am simply being realistic. Which is why I added "Then again" at the end of the post, I suppose.

I agree with you as well on luck. At a certain point in one's life, one can see what was gained and what was missed by an inch or a word.

As always, thank you for your thoughts, and for stopping by.

Tim: thank you very much for those observations -- I hadn't thought of it in that context. I agree with you that Tessimond's words can be "apt and true" when it comes to aging. Very sad, "the guttering away".