Well, as I said in my previous post, when I think of Robert Frost, I'm apt to think of Edward Thomas, and vice-versa.  And, sure enough, Thomas's "Aspens" has sent me in the direction of another poem by Frost.

The following poem is one of many that puts to paid the once-common notion that Frost is simply a kindly (albeit slightly cranky) cracker-barrel Yankee philosopher.  You know what I mean:  "Two roads diverged in a yellow wood" and all that.  Of course, I make no claim to originality in observing that Frost has a "darker" side.  This is, by now, a common notion as well.  (Perhaps the emphasis has gone too far in that direction.) 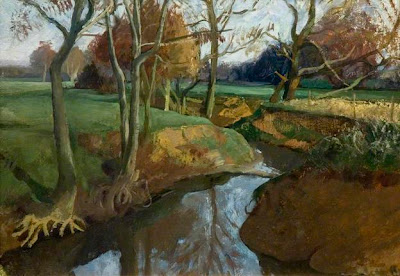 Where had I heard this wind before
Change like this to a deeper roar?
What would it take my standing there for,
Holding open a restive door,
Looking down hill to a frothy shore?
Summer was past and day was past.
Somber clouds in the west were massed.
Out in the porch's sagging floor,
Leaves got up in a coil and hissed,
Blindly struck at my knee and missed.
Something sinister in the tone
Told me my secret must be known:
Word I was in the house alone
Somehow must have gotten abroad,
Word I was in my life alone,
Word I had no one left but God.

Yes, there is "darkness" in Frost, but I wonder whether he isn't pulling our legs at the same time.  At least a bit.  That would be just like Frost.

But there is no gainsaying the fact that both Frost and Thomas were aware of what it means to be "in the house alone," to be "in my life alone," as the wind soughs.  Not that they would complain about it, or ask us to feel sorry for them, mind you.  But they both knew that it has to be faced up to. 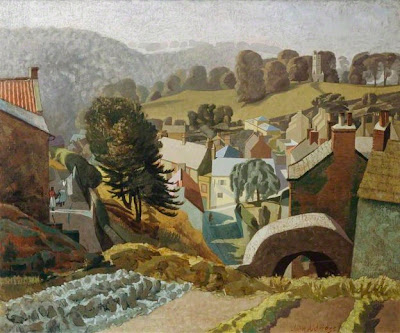 And thus comes yet another turn from Frost back to Thomas.  Again, we find ourselves in an empty house.  As the wind soughs.

Old at once was the house,
And I was old;
My ears were teased with the dread
Of what was foretold,

Nights of storm, days of mist, without end;
Sad days when the sun
Shone in vain:  old griefs, and griefs
Not yet begun.

All was foretold me; naught
Could I foresee;
But I learnt how the wind would sound
After these things should be. 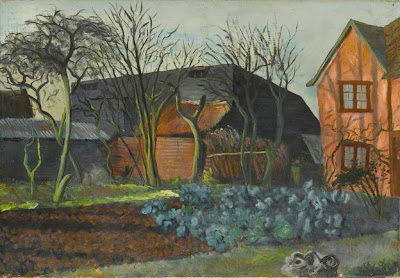 Two very beautiful, complementary poems. Maybe it's familiarity but Frost's seems predictable in its rhythm, clever in its structure, with nothing put at risk by finding that God personified in wind keeps the lonely company. Thomas' on the other hand seems to come from some other place, where the wind is heard more deeply to hear the darkness within himself. The stops and starts, the blots of rhyme, all creating a quiet horror that the future - the thing we most don't want to know - is all too clear.

Mr. Sigler: as always, I appreciate hearing your thoughts.

I didn't know this until recently, but, according to Jay Parini in his biography of Frost, Frost wrote "Bereft" in August of 1893, when he was a mere 19-year-old. (But it wasn't published until 1928.) Perhaps this is why it may seem a bit pale compared with "The New House"? Thomas was in his late 30s and had been through a great deal of self-laceration before he reached the point where he could write "The New House." Just a thought.