The Sound Of Waves

In my previous post, I suggested that Tu Fu's "Thoughts while Travelling at Night" is the most famous on-board-ship poem of the T'ang Dynasty. Others may argue that the following poem by Po Chu-i (772-846) claims that distinction.  On further reflection, I recognize that "most famous" is a hollow and superficial description -- "most beloved" or "most admired" are, I think, preferable.  In any event, both poems are lovely.

I pick up your scroll of poems, read in front of the lamp;
the poems are ended, the lamp gutters, the sky not yet light.
My eyes hurt, I put out the lamp, go on sitting in the dark;
a sound of waves blown up by head winds, sloshing against the boat. 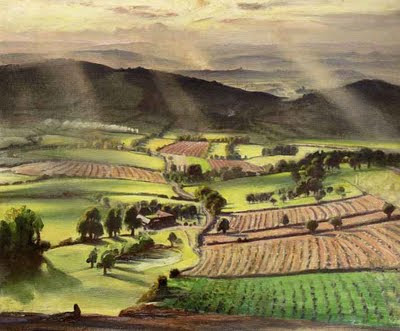 Here is a second translation of the same poem by Arthur Waley (1889-1966), who was one of the pioneering translators of Chinese poetry into English.  Waley's translations have a lyricism to them that is not often present in other translations, yet he still remains faithful to the original texts.

I take your poems in my hand and read them beside the candle;
The poems are finished, the candle is low, dawn not yet come.
My eyes smart; I put out the lamp and go on sitting in the dark,
Listening to waves that, driven by the wind, strike the prow of the ship.

On Hearing Someone Sing A Poem By Yuan Chen

No new poems his brush will trace;
Even his fame is dead.
His old poems are deep in dust
At the bottom of boxes and cupboards.
Once lately, when someone was singing,
Suddenly I heard a verse --
Before I had time to catch the words
A pain had stabbed my heart. 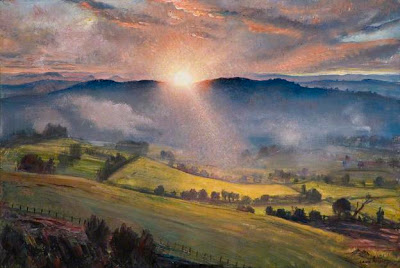 Lovely stuff. Regardless of the translations, there is a kind of photographic poeticism there that always delights me when I see it. There is also something very "Chinese" about it (to risk being a poetic stereotyper) -- a tone that puts me in mind of the Tao Te Ching, from which I read almost nightly. Ther is something below both connotation and denotation that facsinates me about Chinese writing -- at least in translation.

Chris: that is an excellent way of describing it. As I think I have said before on the blog, I sometimes feel the need for simple, declarative sentences about the world, and at those times I often turn to Chinese poetry. (And I agree that the Tao Te Ching is of a similar tone.)

As always, thank you very much for your thought-provoking comments.

hi, stephen. just to let you know i walked in here feeling a sense of entering a much-loved and welcoming home. have had a few busy days, and like a bee returning to its hive i have come to your poetry blog, not knowing what specific thoughts and poems it holds today, but drawn by the smell...i am a co-traveller.

I agree, Stephen: "above" or "beyond" are mort apt choices. There is more to a little, still pond than the color of its placid water -- there's the refelection of the trees and the sky beyond. Somehow that works for me, here.

anjali: thank you for visiting once again, and for your kind words. The idea of bees floating in to visit is very nice!

Thanks, Chris. I like your image of the pond and its reflections -- Chinese poetry always brings a sense of calm and quietness to me.

Your choice of complementary images is always delightful and stimulating. I have a fondness for Laura Knight and wrote about her on my own blog some years ago. I will be visiting the major exhibition of her works which is on at the Penlee House Gallery in Penzance at the end of the month - but I would be surprised to see either of these pictures which are from the end of her career which gets less coverage than the idyllic paintings of the Cornish landscape or the ballet/circus period.

alice o: thank you very much for visiting again, and for your kind words.

I checked the Knight "In the Open Air" exhibit at the Penlee House website: it looks wonderful. Oh, to be in England!