I have decided that I am going to ignore this year's presidential election in the United States.  I hasten to add that this is not intended to be some sort of grandiose political/philosophical/cultural statement on, say, the status of republican democracy.  I am not raising a white flag at the thought of enduring four more months of media mendacity.  Nor am I throwing in the towel at the horrific prospect of watching a series of mind-numbing, soul-destroying (my mind and my soul) debates between the candidates.

No, the rationale for this dereliction of civic duty is very simple:  noise reduction.  We live in a time when noise -- whether it is absorbed through the ears or through the eyes -- assails us from all sides.  We dwell in a Bedlam which consists, not of the cries of the mad in a dark Victorian asylum, but of a never-ending airport concourse in which CNN blares from television monitors 24 hours a day.  Have you ever tried to escape from that sound?  Why add to the cacophony?  The choice, after all, is ours. 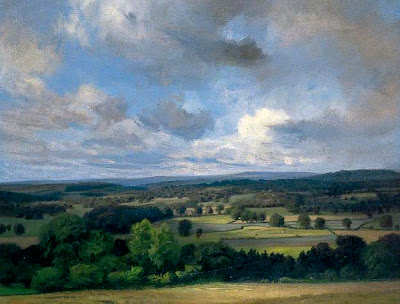 Listen to me and you will not need to listen
To your own voice thin as a shred of paper uncurling,
Your laughter empty and brittle as an eggshell:
Your thoughts thrown back in your teeth by the cynical wind.

You will not hear the diffidence of breath,
The importunacy of blood, denying death,
The pulse's halt and start,
The morse code of the heart,
Or your two hands whispering together, unquiet as air-stirred leaves.

Listen to me and you will not need to listen.
I am your rampart against silence, time,
And all the gods with empty arms, and eyes
Cold as mirrors, cold and white with questions. 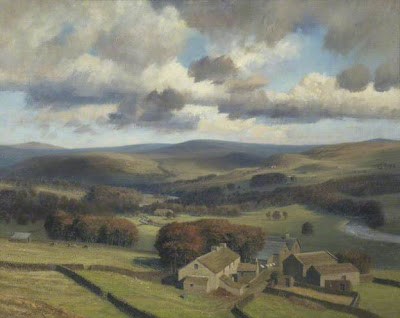 Anne Isabella Brooke, "Wharfedale From Above Bolton Abbey" (1954)
Posted by Stephen Pentz at 12:10 AM

Yes. So much "sound and fury, signifying nothing." Thank you, as always. I'm going to copy this poem out and post it above the sink where I'll see it when I do my dishwashing contemplation each evening.

Mary F. C. Pratt: that is a good way of describing things.

I'm glad that you like the poem. I'm not sure that I've completely figured it out, but I think I see what he's getting at, so I thought it fit in with my thoughts.

Thank you very much for visiting again. I always appreciate hearing from you.

That poem's a little too cult leader ironic for my tastes, but I love your first two paragraphs: perfection!

Thank you for your thoughts, Mr. Sigler. Yes, the irony content is often quite high in Tessimond's poems -- I see what you mean.

As for the first two paragraphs: I appreciate your kind words. But perhaps, in retrospect, they have too much of a rant about them!

I like this poem a lot - it reminds me of Louis MacNeice.

Ms Aykroyd: thank you for visiting again. I'm glad that you like the poem.

I agree with the MacNeice comparison -- Tessimond has always reminded me of MacNeice. Both their tone and their subject matter are often very similar. Although MacNeice is, of course, much better known than Tessimond, Tessimond was actually 5 years older than MacNeice and in many ways anticipated what MacNeice was to sound like later.

It is unfortunate that Tessimond's poetry was neglected for so many years. However, he appears to be getting more recognition of late.