"The Crying Of Water"

I'd like to stay with the sounds of the sea for a moment longer.  John Freeman's "The Hounds," which appeared in my previous post, is a fairly austere poem.  Austere, but still deeply felt.  Freeman was one of the early-20th century Georgian poets.  Although the verse of the Georgian poets may seem "traditional" (in subject matter and language) to "modern" tastes, the Georgians were themselves reacting against what they saw as the fripperies of "traditional" Victorian poetry.

They were also suspicious of the excesses of the Decadent poets of the Nineties.  Absinthe and all that.  As I have indicated on more than one occasion, I have a soft spot for the Nineties poets, whatever their excesses. This is simply a matter of mood.

The following poem by Arthur Symons -- a Decadent -- is higher-strung than "The Hounds."  The recurrent "woe-is-me" emotional tenor of the Nineties poets is definitely in evidence.  It is certainly a different sort of poem from "The Hounds," but it has its own appeal.  The sea haunts in many different fashions. 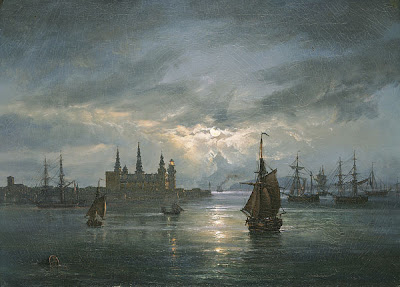 The Crying of Water

Unresting water, there shall never be rest
Till the last moon droop and the last tide fail,
And the fire of the end begin to burn in the west;
And the heart shall be weary and wonder and cry like the sea,
All life long crying without avail,
As the water all night long is crying to me. 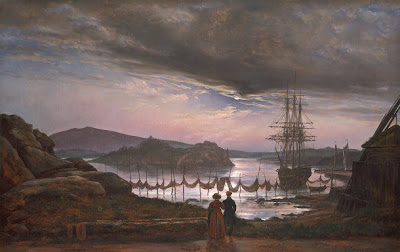 In fact, Symons could operate at a less emotionally-intense level when he wanted to.  I suspect that it depended upon whether he was in the throes of a romantic and/or religious crisis.

The sea, a pale blue crystal cup,
With pale water was brimmed up;
And there was seen, on either hand,
Liquid sky and shadowy sand.

The loud and bright and burning day,
Charred to ashes, ebbed away;
The listening twilight only heard
Water whispering one word.

Arthur Symons, The Fool of the World and Other Poems (1906). 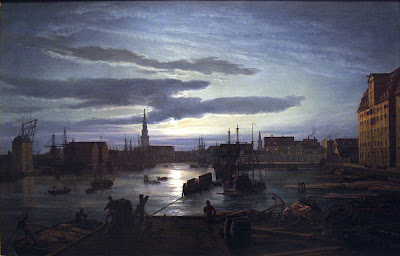 Johan Christian Dahl, "Copenhagen Harbor by Moonlight" (1846)
Posted by Stephen Pentz at 12:19 AM

I really love the title 'The Crying of Water' although the poem itself is not a style that would normally appeal to me. Sorry, Mr Pentz!

As I discovered recently, choosing a title for a poem is an under-rated aspect of the poet's art - especially for shorter forms.

alice c: no need to worry! As I have noted, the Nineties poets aren't for everyone, so I understand your feelings. As you say: it is a fine title (at least).

As always, it is good to hear from you. Thank you very much for stopping by.