We have previously considered the poetic possibilities of the humble swede. It is now time to turn our attention to the mangel (also known as the mangel-wurzel and the mangold).  Those who are knowledgeable about such things (I am not a member of that group) are quick to point out that a mangel is a variety of beet, whereas a swede is a variety of turnip.  Thus, in my researches into this matter, I discovered an ancient English proverbial phrase:  "He doesn't know a swede from a mangel-wurzel!"

In any event, the mangel is a noble vegetable, and it has a noble poetic history. 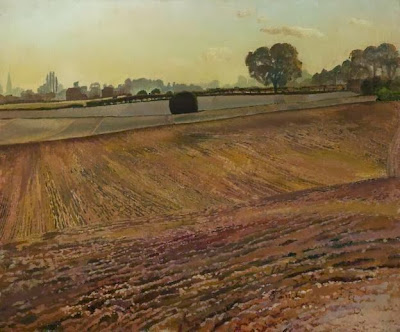 The following poem by Ivor Gurney begins with Edward Thomas, turns to mangels, and then heads off on one of Gurney's wonderful excursions.

It was after War, Edward Thomas had fallen at Arras --
I was walking by Gloucester musing on such things
As fill his verse with goodness; it was February; the long house
Straw-thatched of the mangels stretched two wide wings;
And looked as part of the earth heaped up by dead soldiers
In the most fitting place -- along the hedges yet-bare-lines.
West spring breathed there early, that none foreign divines.
Across the flat country the rattling of the cart sounded;
Heavy of wood, jingling of iron; as he neared me, I waited
For the chance perhaps of heaving at those great rounded
Ruddy or orange things -- and right to be rolled and hefted
By a body like mine, soldier-still, and clean from water.
Silent he assented; till the cart was drifted
High with those creatures, so right in size and matter,
We threw them with our bodies swinging; blood in my ears singing:
His was the thick-set sort of farmer, but well-built --
Perhaps long before, his blood's name ruled all:
Watched all things for his own.  If my luck had so willed
Many questions of lordship I had heard him tell -- old
Names, rumours.  But my pain to more moving called
And him to some barn business far in the fifteen acre field.

Of course, one wonders whether Gurney had Thomas's "Swedes" in mind, both when he was tossing mangels into the farm-cart and later when he wrote the poem.  I find the phrase "after War" (not "after the War," as one might expect) intriguing:  does Gurney have in mind "War" as a perennial human condition, rather than "the War" as a unique historical event?  But I may be reading too much into it. 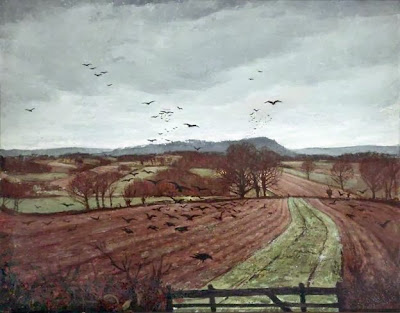 In 1932, Thomas's widow Helen visited Gurney in the asylum in which he was confined.  Her description of her initial meeting with Gurney is heart-breaking:

"We were walking along a bare corridor when we were met by a tall gaunt dishevelled man clad in pyjamas and dressing gown, to whom Miss [Marion] Scott introduced me.  He gazed with an intense stare into my face and took me silently by the hand.  Then I gave him the flowers, which he took with the same deeply moving intensity and silence.  He then said, 'You are Helen, Edward's wife and Edward is dead.'  And I said, 'Yes, let us talk of him.'

So we went into a little cell-like bedroom where the only furniture was a bed and a chair.  The window was high and barred and the walls bare and drab. He put the flowers on the bed for there was no vessel to put them in; there was nothing in the room that could in any way be used to do damage with -- no pottery or jars or pictures whose broken edge could be used as a weapon. . . . We spoke of country that he knew and which Edward knew too and he evidently identified Edward with the English countryside, especially that of Gloucestershire."

And for that minute a blackbird sang
Close by, and round him, mistier,
Farther and farther, all the birds
Of Oxfordshire and Gloucestershire.

She then recounts her second visit to Gurney:

"The next time I went with Miss Scott I took with me Edward's own well-used ordnance maps of Gloucestershire where he had often walked. This proved to have been a sort of inspiration, for Ivor Gurney at once spread them out on his bed and he and I spent the whole time I was there tracing with our fingers the lanes and byways and villages of which Ivor Gurney knew every step and over which Edward had also walked.  He spent that hour in revisiting his home, in spotting a village or a track, a hill or a wood and seeing it all in his mind's eye, with flowers and trees, stiles and hedges, a mental vision sharper and more actual for his heightened intensity.  He trod, in a way we who were sane could not emulate, the lanes and fields he knew and loved so well, his guide being his finger tracing the way on the map.  It was most deeply moving, and I knew that I had hit on an idea that gave him more pleasure than anything else I could have thought of.  For he had Edward as companion in this strange perambulation and he was utterly happy, without being over-excited." 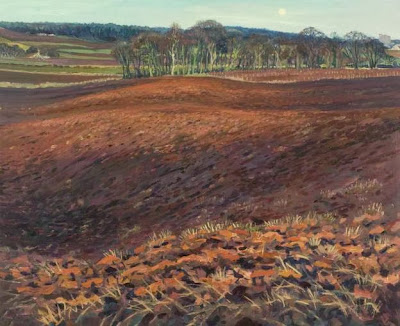 Gurney's encounter with the farmer is reminiscent of Edward Thomas's encounter with a farmer plowing a field in the untitled poem which begins "As the team's head-brass flashed out on the turn."  The poem takes place during the War, before Thomas was sent to France.  Here is part of the poem:

. . . Every time the horses turned
Instead of treading me down, the ploughman leaned
Upon the handles to say or ask a word,
About the weather, next about the war.
Scraping the share he faced towards the wood,
And screwed along the furrow till the brass flashed
Once more.
The blizzard felled the elm whose crest
I sat in, by a woodpecker's round hole,
The ploughman said.  'When will they take it away?'
'When the war's over.' . . . 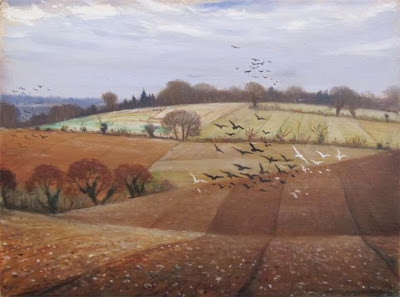 "It was after War, Edward Thomas had fallen at Arras"

Perhaps Gurney is being ironic. Wasn't WWI called The Great War and
The War to end all Wars?

Having spent many dreary hours cutting mangel wurzels for pocket money in my school days I have to say I find it hard to think of them as 'magnificent'! Gurney's poem is wonderful though. If it's not too presumptious I wrote my own poem about poor Ivor's displacement from the country he loved:-
IVOR GURNEY’S JOURNEY

Striding the miles-long night
disguised the disappointments
of landscape, that inconstant friend.
Where they fell the sentry copse,
brick and bury the sheep’s lee fold
and trench the damp, sniped corners.
Mirror the displacement of that harsher day-lit world of men.

But they can’t touch the sky!
Clouds and constellations too far
for even long-range guns
or commerce’s ravening hand.
So giants still stalk the bare ridge-line,
queens lie fettered over market towns
and heroes wade in the Severn
among the fish-eyed stars.

They can’t touch the sky!
Oh but they can, they can too easily:
a low ward roof, too-dark drapes,
the regimental ranks of too-tall brick.
Half-a-life in alien enclosures,
horizons trimmed to yards, and stars,
disordered, unmapped and mythless,
lost in the glimmer and glare.

But at times we’ve too sat transfixed
in those places that restrict our view.
Feeling this is not our ground, that
somewhere, else, still waits for us;
perhaps forsaken, perhaps unfound.
Even though our door lies unbolted,
and the high windows beckon unbarred,
wardered only by fear, or fear
of disappointment, lying outside.

Surviving on the memory of skies.

Fred: I like your thought -- it makes perfect sense in the context of the names that you mention. And it fits well with the anger and bitterness that is often explicit in his post-war poetry (and which always seems to lie just beneath the surface -- along with sadness and loss).

It's good to hear from you again. Thank you very much for stopping by.

Mr Morgan: thank you for visiting again, and for sharing the lovely poem. It captures the general setting and feeling of much of Gurney's poetry very well. And, in particular, it is a fine complement to "The Mangel-bury," which has its own blending of wartime and post-war landscapes: e.g. "And looked as part of the earth heaped up by dead soldiers/In the most fitting place . . ." Which goes quite well with, for example, your "sentry copse" and '"regimental ranks of too-tall brick." He cannot escape, can he?

I have been catching up with you this morning.

I read "Now All Roads Lead to France" by Matthew Hollis this summer, for the most part, on the back of your many Edward Thomas posts. Helen Thomas was clearly an extraordinary woman … Have you ever read anything of hers?

In the context of your quote from Adelstrop, I thought of this, Sassoon's Everyone Sang (I'd not put them together before - they are not obvious companion pieces):

EVERYONE suddenly burst out singing;
And I was filled with such delight
As prisoned birds must find in freedom,
Winging wildly across the white
Orchards and dark-green fields; on—on—and out of sight.

Everyone’s voice was suddenly lifted;
And beauty came like the setting sun:
My heart was shaken with tears; and horror
Drifted away ... O, but Everyone
Was a bird; and the song was wordless; the singing will never be done.

Eamonn: it's very nice to hear from you again.

Yes, I have read parts of Helen Thomas's memoirs, As It Was (1926) and World Without End (1931), which are conveniently combined in an edition issued by Carcanet titled Under Storm's Wing. I've also read a few of the pieces in Time and Again, one of which is quoted in the post. She is well worth reading. I cannot forget her description of Edward leaving their house to go away to France: walking away into the night, but calling back. Heartbreaking.

I hadn't connected "Adlestrop" and "Everyone Sang" with one another either, but you're absolutely right: they go together wonderfully. Thank you for connecting the two of them!

As always, thank you very much for stopping by. Merry Christmas and Happy New Year.

Thank you Stephen. I'll look that edition up.

Seasons greetings to you and yours from a bright & chilly London.

By the way, it should be easy to track a copy down since it was published in paperback.