One of my afternoon walks takes me through a former army post (now a park) that is located on the bluffs beside Puget Sound.  During the Second World War, the post was a way-stop for those departing to the Pacific.  One stretch of the walk takes me along an abandoned road.  On the west side of the road a wide meadow slopes down to the Sound -- an expanse of glittering blue or flat grey, according to the weather.  On the other side, a meadow slopes upward to what was once the parade ground.

Each year I watch the meadows edge further and further into the road. During the summer, wild sweet peas move towards one another from either side.  The ever-present moss of this part of the world has worked its way into the cracks of the asphalt.  In their seasons, swallows, thrushes, and warblers skim across the meadow grasses.

How long before the road vanishes?  Will I be around to see it?

The flower of our times, the gipsy of hedgesides
Has turned the squatter of bomb, demolition
And building sites, following machines
As the gull the plough.  Still in Cullen's Planting
It crowds the gaps in the system of blackberry bushes
And covers your coat in Autumn with the silken kisses
Of its seeds or on a windy day
Thousands of parachutes in exodus
Blow across Partridge Hill; it marches in lanes
Along the hedgesides most recently cleared.
But now in towns and cities, climbing heaps
Of dusty rubble and perching in cavities
Of broken walls, it sweeps to confrontations,
The Nature for ever at our cultured elbow,
Ready, should we make a fatal mistake,
To grow in the bulldozer's scoop and through the telly. 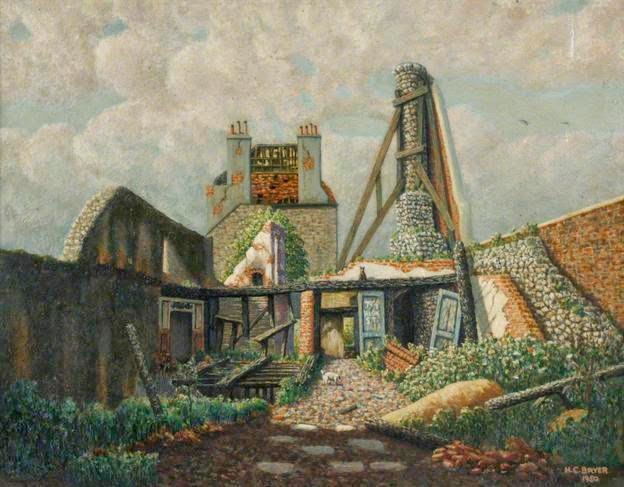 I do not offer my anecdote as some sort of metaphor for, say, Mortality, the Implacability of Time, or the Passage of Civilizations.  "Look on my works, ye Mighty, and despair!"  Or something like that.  No.  Rather, I am moved by the matter-of-factness with which the World goes about its business. The impassive persistence of life is a wonderful thing.

Marshalled into Huddersfield
Between the BR Manchester line and A62,
The Colne sidesteps the jumble and nearly new
At the centre of the fifteenth largest town,
Swings wide and steers towards this bridge,
Under trees that were it left alone
A hundred years, it would undermine.
Along this reach, over its series of weirs
It combs itself clean from centuries' pollution
By people's lives.  The semi-darkness squeezes
Out a solitary duck, white
And veering about at the head of its wake. 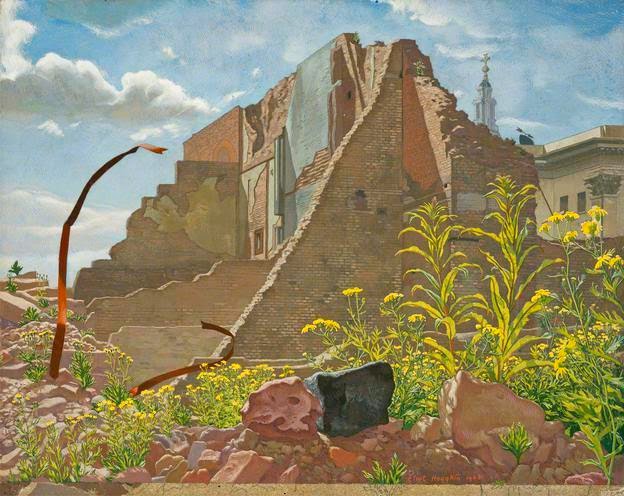 "Earth never grieves!"  (Thomas Hardy, "Autumn in King's Hintock Park.") This is not a cry of despair.  It is simply a statement of lovely fact.  The sweet peas have now shrivelled and fallen.  But they are far from finished. The warblers, thrushes, and swallows have departed.  But only for a spell. The moss goes on doing what it does.  We humans fit in somewhere.  For a spell.

Wood by a Road

Scythed grass and nettles blanch at the side
Of the seedy pomp of the late summer wood
And in the misfortunes of a risky world
I admire how these trees succeed.

Oaks and silver birches cup their hands
Above the sparking flowers of creeping plants
Never intending to emerge to the wind
Or the damp that drags the cobwebbed bent-grass down.

No birds sing but a thrush with a worm
Tacks the path with his prints in a running stitch
And a rabbit puts a distance between us;
Moths stay painted on hawthorn bushes.

All that a wood can do, the wood has done:
The dark green leaves extend their hands
Indicating nothing left to hide;
Everything prospers on the brink of decline. 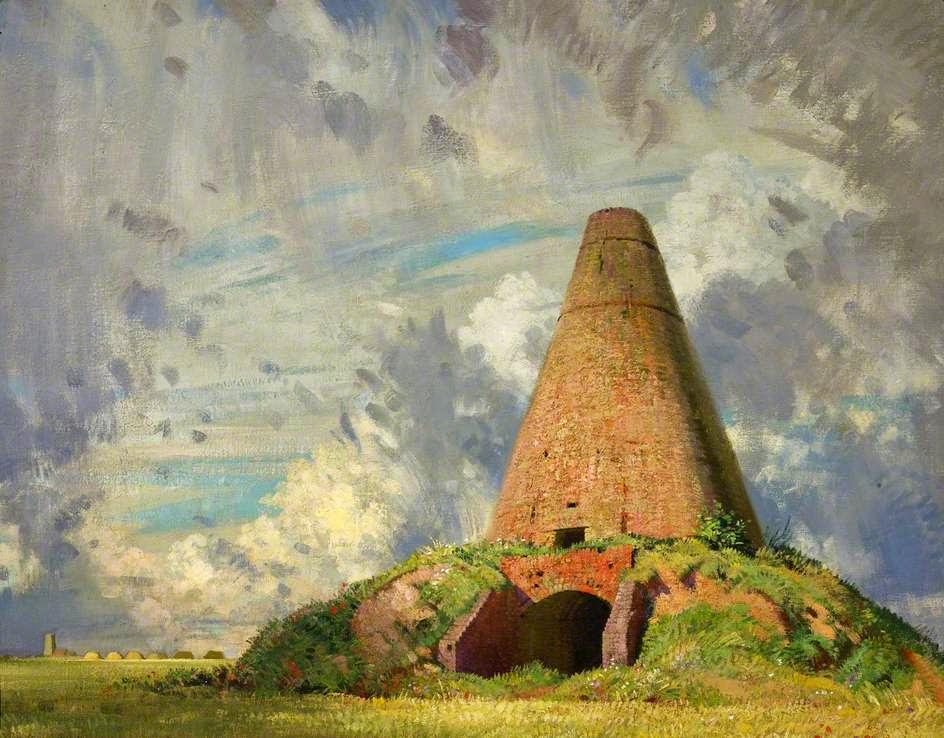 A wonderful post Mr Pentz and thank you for introducing me to a poet I had not come across before. Wood By A Road is particularly good. These words of your own too "I am moved by the matter-of-factness with which the World goes about its business. The impassive persistence of life is a wonderful thing."
How true, in spite of all our human busyness and the unwarranted importance we attach to some of the extraordinarily silly things we do, the world goes on; the grass grows, the trees come into blossom and leaf, the leaves fall, the seasons pass. Such constancy and endurance is as you say a wonderful thing. We are fortunate to be able to witness it.
Thank you for bringing Stanley Cook to my attention.

The illusion that nature has an affinity for human beings, that it somehow nurtures us, communicates with us, reveals to us, is often pointed out by Robert Frost. It's true the woods are lovely, dark and deep, and they seem to invite the observer in. Did one enter the dark woods filling up with snow, one would freeze to death.

In his poem "The Need of Being Versed In County Things," Frost soundly makes the point that nature is indifferent to humankind. The remains of the burned down house prompt the poet to imagine the life that once stirred on the spot. For a moment the poet thinks s the sounds of the birds as they fly in and our of broken windows are sighs, sighs like that of a sensibility contemplating what once was and now is no more, that paramount truth that things fade. But the poet then realizes that the birds didn't feel sad. To shun this kind of illusory thinking one "must be versed in country things."

It's pure Frost to use the phrase "country things" to belie the profound insight of the poem.

The poem The Need of Being Versed in Country Things

The house had gone to bring again
To the midnight sky a sunset glow.
Now the chimney was all of the house that stood,
Like a pistil after the petals go

The barn opposed across the way,
That would have joined the house in flame
Had it been the will of the wind, was left
To bear forsaken the place's name.

No more it opened with all one end
For teams that came by the stony road
To drum on the floor with scurrying hoofs
And brush the mow with the summer load.

The birds that came to it through the air
At broken windows flew out and in,
Their murmur more like the sigh we sigh
>From too much dwelling on what has been.

Yet for them the lilac renewed its leaf,
And the aged elm, though touched with fire;
And the dry pump flung up an awkward arm;
And the fence post carried a strand of wire.

For them there was really nothing sad.
But though they rejoiced in the nest they kept,
One had to be versed in country things
Not to believe the phoebes wept.

Mr Ashton: I'm pleased to have introduced you to Stanley Cook. I came across a poem of his in an anthology five or so years ago, and tracked down his Collected Poems. I think he deserves greater attention.

Yes, these small landscapes are a good reminder to us about what is and what is not important, what passes and what remains, aren't they?

Mr Floyd: Thank you very much for your thoughts, and for sharing Frost's poem, which goes well here. The quintessential Frost touch in the final two lines is lovely.

As ever, I appreciate your stopping by, and sharing a fitting poem.

Yes, one " versed in country things" knows that the trilling bird at twilight, no matter the beauty of the song seeping from dusky woods, is not proffering an invitation to latch upon human ear. The yearning heart hears, "Come in," but that "precarious" thing called experience hears a sterner tone.


I came to the edge of the woods,
Thrush music -- hark!
Now if it was dusk outside,
Inside it was dark.

But no, I was out for stars;
I would not come in.
I meant not even if asked;
And I hadn't been.
Robert Frost

That Haberdashers' Hall is so Ozymandias.

Anonymous: Thank you very much for your thoughts, and for sharing "Come In," which is, I think, one of Frost's loveliest poems. Among the many wonderful things in it, I've always been fond of "Far in the pillared dark." The final stanza is one of the best of Frost's marvelous final stanzas. Always a twist . . .


Robinson Jeffers, who lived and wrote lived, in a manner of speaking just down the road from you, understood the utter absurdity of mankind's anthropocentric view of our world, his incestuous fascination with himself. Men will go the way of the dinosaurs, the universe no more interested him than in a fly. What will endure is staggering beauty, not the folly of men, their feverous dreams. Let a man uncenter himself.

Anonymous: Thank you for the poem by Robinson Jeffers, which is new to me. I have never explored his work, although, from what I have read of him, he tended to have a fairly dim view of humanity, bordering on the misanthropic. But this may be a superficial assessment, based on inadequate knowledge.

That being said, this poem has some lovely parts, although it seems to me that it is downright grumpy at the end! I can understand (to some extent) the notion of man "uncentering" himself/herself. But he is overly dismissive of "the whole human race," don't you think?

How your blog stretches my mind and introduces me to new poets. Thank you.

Can I just add that the painting of the Southampton ruin was a pleasure, as the walls of that ruin are still there, although I think the chimney (which looks Flemish - we have those round Flemish ones in Pembrokeshire, Wales) was probably taken down by some early form of Health and Safety!!

Bovey Belle: You're very welcome. My pleasure. I came across Stanley Cook through a single poem in an anthology, and then tracked down his Collected Poems. He wrote a number of fine poems.

And thank you for the personal report on the Southampton ruin! I am always happy when one of my UK readers is able to share their personal knowledge about a place that appears in one of the paintings. (And I seem to recall you doing so on other occasions -- probably relating to Wales, Hardy Country, and/or E.T.'s haunts.) It's nice to know that it is still there, although I am not surprised at the chimney's demise: it looks to have been pretty precarious back in 1950, when the picture was painted!