Simonides of Ceos (c. 556 - c. 468 B. C.) is best known as the author of the inscription that appeared on the monument to the Spartans that was erected after the battle of Thermopylae.  The inscription was recorded by Herodotus:

Go, stranger, and to Lacedaemon tell
That here, obeying her behests, we fell.

George Rawlinson (translator), The History of Herodotus, Volume IV (1860), Book VII, Section 228, page 180.  The inscription has traditionally been ascribed to Simonides, although there has been scholarly debate on this point.

I am fond of this translation:

Go, tell the Spartans, thou who passest by,
That here, obedient to their laws, we lie.

This sort of restraint -- a restraint charged with unspoken emotion -- is largely absent from the modern world.  I do not wish to romanticize the ancient world:  it was a harsh and brutal place.  But there is a seemliness and a sense of proportion at work that are mostly missing in our own time. 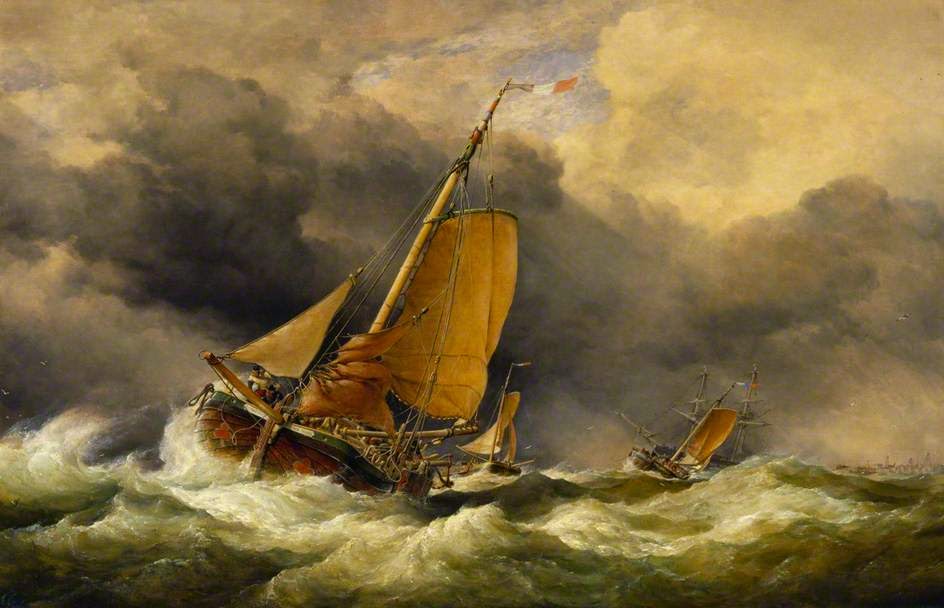 Edward William Cooke
"Scheveningen Pincks Off the Coast of Yarmouth" (1864)

In the late 1890s, a marble block with a two-line inscription carved into it was discovered on the Greek island of Salamis, which gave its name to the culminating naval battle of the Greek-Persian Wars.  The Corinthians who died in the battle were buried on Salamis.  Here is the inscription, which has been attributed to Simonides:

O stranger, once we dwelt in Corinth blest with fountains;
Now the isle of Ajax holds our bones.

Here is an alternative, sparer, translation.

Friend, we once were alive in the harbor city of Korinth.
Now the island city of Salamis is our grave. 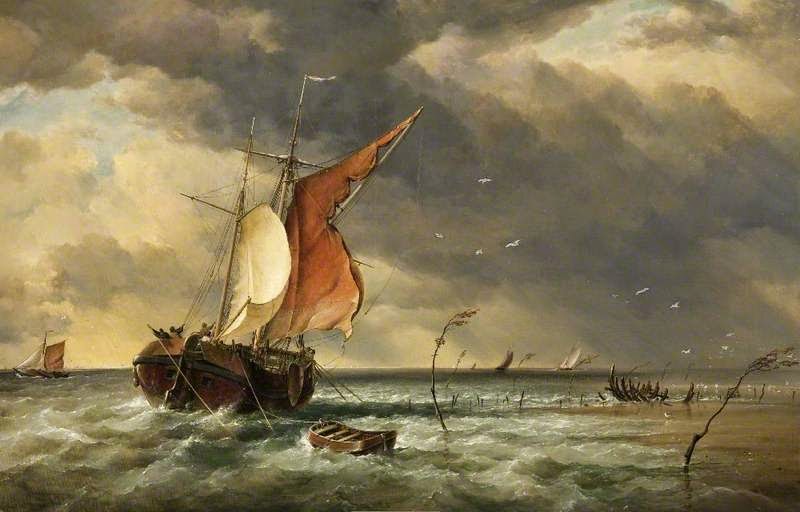 In Book I of De Divinatione, Cicero tells the following story of Simonides:

"[Simonides] once saw the dead body of some unknown man lying exposed and buried it.  Later, when he had it in mind to go on board a ship, he was warned in a vision by the person to whom he had given burial not to do so and that if he did he would perish in a shipwreck.  Therefore he turned back and all the others who sailed were lost."

William Wordsworth, who admired the poetry of Simonides, wrote the following untitled sonnet about the incident related by Cicero.

I find it written of Simonides
That travelling in strange countries once he found
A corpse that lay expos'd upon the ground,
For which, with pains, he caused due obsequies
To be performed, and paid all holy fees.
Soon after, this man's Ghost unto him came
And told him not to sail as was his aim,
On board a ship then ready for the seas.
Simonides, admonished by the ghost,
Remained behind; the ship the following day
Set sail, was wrecked, and all on board were lost.
Thus was the tenderest Poet that could be,
Who sang in ancient Greece his moving lay,
Saved out of many by his piety. 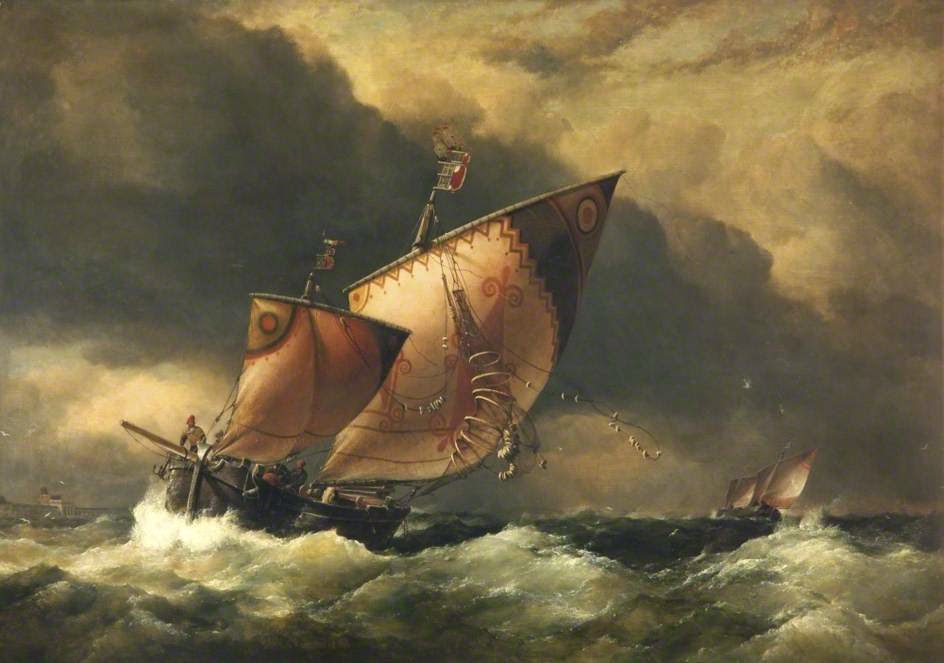 As I have noted on a previous occasion, the fate of unfortunate mariners was a common subject of the Greek poetry of antiquity.  The following lovely poem by Callimachus has appeared here before, but it is worth revisiting at this time due to its resemblance to the story of Simonides and the abandoned corpse.

Stranger, whoe'er thou art, found stranded here,
O'er thee Leontichus heaped up this grave,
Whilst at his own hard lot he dropped a tear:
He too, a restless sea-bird, roams the wave.

Callimachus (translated by Henry Wellesley), in Henry Wellesley (editor), Anthologia Polyglotta: A Selection of Versions in Various Languages, Chiefly from The Greek Anthology (1849).

Given the role of the sea in the life of the Greeks, it is not surprising that Simonides wrote a number of poems about the misfortunes of seafarers. This is an inscription for a cenotaph.

O cloud-capt Geraneia, rock unblest!
Would thou hadst reared far hence thy haughty crest,
By Tanais wild, or wastes where Ister flows;
Nor looked on Sciron from thy silent snows!
A cold, cold corpse he lies beneath the wave,
This tomb speaks, tenantless, his ocean grave.

Simonides (translated by Robert Bland), in J. H. Merivale (editor), Collections from The Greek Anthology (1833).  Mount Geraneia is located on the Isthmus of Corinth.  Tanais was a Greek colony located on the far northeastern corner of the Sea of Azov, on the banks of the River Don.  Ister was the Greek name for the Danube.  Sciron (also spelled "Sceiron") probably refers to the Sceironian Rocks, a rugged region on the Isthmus of Corinth.

Here is an epitaph.

A land not thine hath shed its dust o'er thee,
A fated wanderer o'er the Pontic sea:
No joys for thee of sweet regretted home;
To sea-girt Chios thou didst never come.

Simonides (translated by Robert Bland), Ibid.  The Pontic Sea was the Greek name for the Black Sea.  Chios is an island in the Aegean Sea near the coast of Turkey. 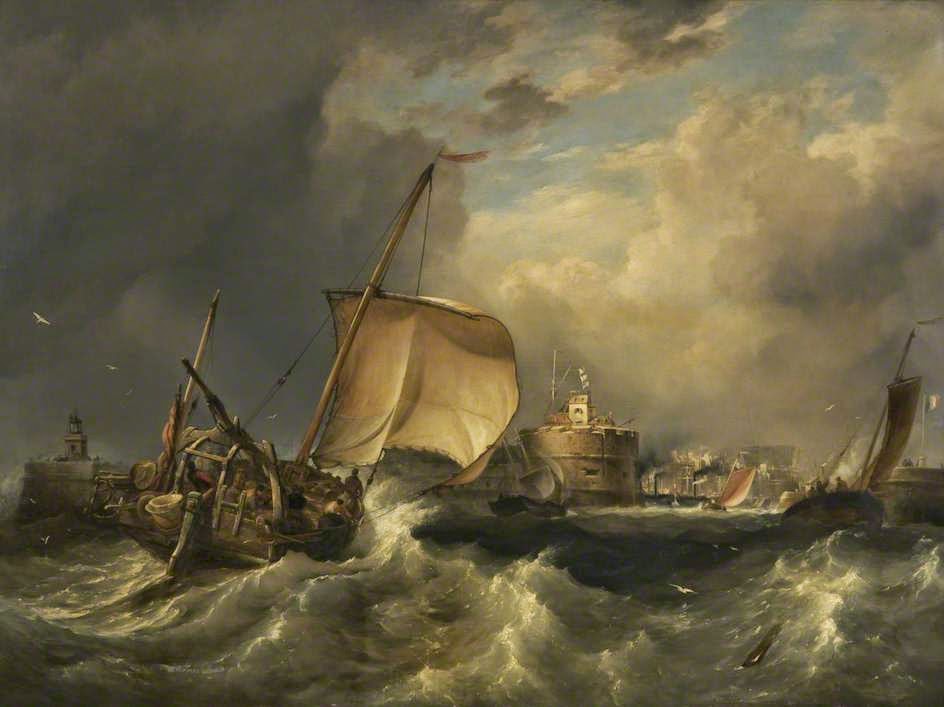 What I love about Wordsworth's poem is that it takes no poetic liberties with the bare prose account left by Cicero. The only addition is Simonides "travelling in strange countries", and Wordsworth's own evaluation of him as a man and poet. Touchingly humble in a way that makes me think that Wordsworth was himself quite impressed by the account.

Sam Vega: I agree with your thoughts on the tone and content of Wordsworth's poem. Although it was written in the midst of his early Romantic period, it is remarkably free of any high-flown passages.

In his Lectures on Greek Poetry (1910), J. W. Mackail, when discussing the poem, makes points that echo yours: "it shows, even better than other more widely known passages, the strong attraction that the one poet [Simonides] exercised over the other; and because, like a good deal of Wordsworth's finest work, it is written in something very near to the Simonidean manner. In both there is the same simple gravity and delicacy, the same absence of any apparent effort, the same lucid straightforwardness that is almost like that of prose -- 'like, but ah, how different!'" (Page 125.)

You are also probably aware that Wordsworth mentions Simonides in a few other of his poems. For instance, the poem which begins "Departing summer hath assumed/An aspect tenderly illumed" contains the following stanza:

O ye, who patiently explore
The wreck of Herculanean lore,
What rapture! could ye seize
Some Theban fragment, or unroll
One precious, tender-hearted, scroll
Of pure Simonides.

As always, thank you very much for visiting, and for your comments.

Wordsworth is a consummate poet. What is amazing about this sonnet is that he produces, as you rightly say, a poem free from any high flown passages. Yet it is accomplished by adhering to the highly wrought form of a Petrarchan sonnet (?) with such a complicated rhyme scheme and the demands of establishing the situation in the octave and then developing it in the sestet. Poets sometimes use the rigorous demands of a sonnet to flex their 'poetic' muscles. No sign of that here. It comes across as simple, unaffected and sincere.

Thank you for introducing me to this poem and its classical origins.

Mr Harrow: Thank you for visiting again, and for your thoughts on Wordsworth's sonnet. I agree with you about the poem revealing Wordsworth as "a consummate poet." I think Mackail, in the passage I quoted above, is exactly right: the poem has "the same lucid straightforwardness that is almost like that of prose -- 'like, but ah, how different!'" This picks up your point about the craft involved, which might not be immediately noticeable.

I am happy to take Wordsworth exactly as he is -- high flown though he may be at times. But part of me wishes that he had used this sort of style more often. In this connection, it is interesting that Wordsworth never included the poem in any of his published collections. It remained hidden in The Morning Post until it appeared in de Selincourt's and Darbishire's 20th century edition.