"Unless, While With Admiring Eye We Gaze, We Also Learn To Love"

As I noted in my previous post, William Wordsworth is prone to high-flown rhetoric and prolixity.  But I am willing to cut him some slack.  Why? Because I have always felt that his poetry is animated by a depth of passion one seldom encounters.  That passion is the product of a love of the World, and of a love for the miraculous fact of our existence in the World.

Not surprisingly, "love" (meant in this broader sense) is a word that one comes across again and again in Wordsworth's poetry.  It is a word that goes to the very heart of what Wordsworth thought of as the vocation of "the Poet":

"He is the rock of defence of human nature; an upholder and preserver, carrying everywhere with him relationship and love."

William Wordsworth, Preface to 1802 edition of Lyrical Ballads, with Pastoral and Other Poems, page  xxxvii.  The phrase "relationship and love" is curious (and lovely), isn't it?  I've never quite figured it out.  But that does not stop me from liking it.

Earlier in the Preface, he speaks of "the Poet's art" as being "a task light and easy to him who looks at the world in the spirit of love."  Ibid, page xxxiii.

Wordsworth published the Preface at the age of 32.  Did his passion wane in his later years?  Well, passion does wane, doesn't it?  Yet he wrote this at the age of 72:

Glad sight wherever new with old
Is joined through some dear homeborn tie;
The life of all that we behold
Depends upon that mystery.
Vain is the glory of the sky,
The beauty vain of field and grove,
Unless, while with admiring eye
We gaze, we also learn to love. 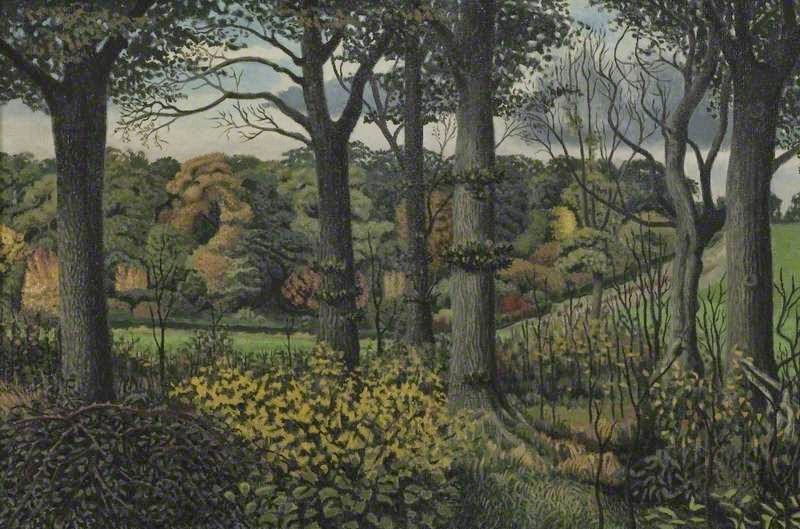 Wordsworth's love is not an abstract, free-floating concept.  Through his poetry, it is intimately connected with, and is the product of, the daily miracle of the World around us.  This love, if we pay sufficient attention (a daunting task!), is one we all carry within us.

The sky is overspread
With a close veil of one continuous cloud
All whitened by the moon, that just appears,
A dim-seen orb, yet chequers not the ground
With any shadow -- plant, or tower, or tree.
At last a pleasant instantaneous light
Startles the musing man whose eyes are bent
To earth.  He looks around, the clouds are split
Asunder, and above his head he views
The clear moon and the glory of the heavens.
There in a black-blue vault she sails along
Followed by multitudes of stars, that small,
And bright, and sharp along the gloomy vault
Drive as she drives.  How fast they wheel away!
Yet vanish not!  The wind is in the trees;
But they are silent.  Still they roll along
Immeasurably distant, and the vault
Built round by those white clouds, enormous clouds,
Still deepens its interminable depth.
At length the vision closes, and the mind
Not undisturbed by the deep joy it feels,
Which slowly settles into peaceful calm,
Is left to muse upon the solemn scene.

A side-note: as I have noted previously in connection with Samuel Taylor Coleridge's line "The one red leaf, the last of its clan," the journal entries of Wordsworth's sister Dorothy provided, on more than one occasion, the source for poems written by Wordsworth and Coleridge.  Such is the case with "A Night-Piece."  On January 25, 1798, she wrote:

"The sky spread over with one continuous cloud, whitened by the light of the moon, which, though her dim shape was seen, did not throw forth so strong a light as to chequer the earth with shadows.  At once the clouds seemed to cleave asunder, and left her in the centre of a black-blue vault. She sailed  along, followed by multitudes of stars, small, and bright, and sharp." 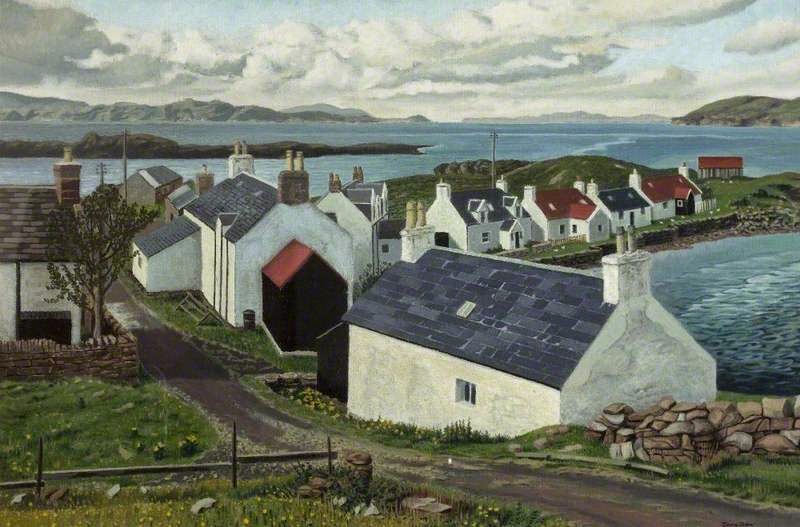 Like the other Romantic poets, Wordsworth produced his fair share of paeans to the moon and the stars, and to the other wondrous immensities of the Universe.  But we mustn't forget that his love is catholic.  The minute particulars (to borrow one of William Blake's favorite phrases) are worthy of -- deserve -- our attention.

To a Child
Written in Her Album

Small service is true service while it lasts:
Of humblest Friends, bright Creature! scorn not one:
The Daisy, by the shadow that it casts,
Protects the lingering dew-drop from the Sun. 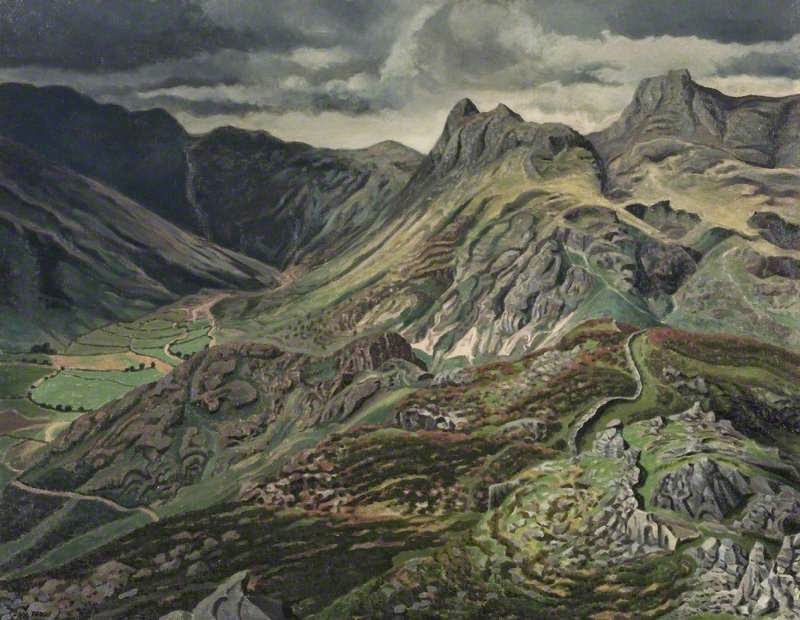 The relationship between "A Night Piece" and Dorothy's journal entry is similar to that between your recently-quoted Simonides poem and the prose translation from Cicero which inspired it. Wordsworth is drawn to a clear piece of prose, and expresses the exact sense of it as a wonderful poem. His ability to "pay attention" to objects and scenes in nature is also applied to the writings of others. This clear seeing and refusal to allow mental proliferation to intrude is, I think, the essence of meditation or mindfulness, rather than the woolly escapism for which it is often mistaken. I also think it is the main reason for Wordsworth's greatness.

(By the way, is there a typo in this post? Dorothy's journal entry was presumably a century earlier...)

Superb essay on Wordsworth. To me, there's always a modern edge in Wordsworth that creeps out in passages like "A Night Piece" - a sorrow at the distance between nature and the mind, despite how full and connected nature makes the mind feel. Stevens later drew out this aspect of Romantic thought quite explicitly. Where, indeed, does nature end and the imagination begin? And why does it matter that we even feel the need to ask such a question? The only answer, of course, is there is poetry there, fragile and ineffable. Something lost in today's materialistic desperation, but then, isn't all true poetry first known when lost?

Sam Vega: As always, thank you very much for your thought-provoking comments. I hadn't thought of the parallel with the prose source of his Simonides sonnet. And your point about his use of Dorothy's journal entry as a starting point for his own meditation is excellent. Along those lines, I notice how he departs from her entry in the middle of line 14 (starting with "How fast they wheel away!"), and then heads off in his own direction.

It is telling, I think, that he uses the phrase "the vision closes" in line 20. Wordsworth, and his poetry, can be described as visionary. But I completely agree with you that his visions are not (to use your apt phrases) "woolly escapism," but rather "the essence of meditation or mindfulness." Perfectly said! And I agree with you that therein lies his greatness. Perhaps this is what I was inarticulately grasping towards when I spoke of his "depth of passion" and his love.

Again, thank you very much. I always appreciate hearing from you. Thank you for your comments throughout the year.

Sam Vega: I apologize: in my response to your comments, I failed to thank you for pointing out my error in dating Dorothy Wordsworth's journal entry. As you say, the correct year is indeed 1798, which I have corrected. Thank you for noticing that.

How fine to see a picture of the Langdale Fells -- another place of glorious silence. Again -- often broken by sheep!
Merry Christmas and Happy New Year to you, who have given your readers an exceptional year.
Susan

Mr. Sigler: It's very nice to hear from you again. Thank you very much for your kind words, and for your thoughts on Wordsworth.

I like what you say about his "modern edge." A poem like "A Night-Piece" does seem absolutely contemporary to me, and for the reasons you suggest. And your comparison with Stevens is an excellent one: they both explore the same territory, don't they?

Some poets I take whole (e.g., Hardy, Larkin, Edward Thomas): virtually everything that they write immediately resonates with me. But there are others who have stretches that give me the fits: Wordsworth, Stevens, and Frost come immediately to mind. But, at their best, they get to the heart of things better than nearly anybody else. You have articulated well why I feel that way about Wordsworth, which I greatly appreciate.

Oh, and thank you for working in "first known when lost"!

Susan: How fortunate for you to have been there! Yes, I can sense the silence (taking into account the sheep).

It is nice to hear from you at this time of year. Thank you very much for your kind words, and for your visits and comments throughout the year.

Happy holidays to you as well!

The journals of Dorothy Wordsworth provide some beautiful (and for William some inspiring) descriptions. 'The Night Piece' is a wonderful evocation of the moon and stars. Wordsworth is astute enough not to deviate far from her words. The metaphor of 'to chequer the earth with shadows' is sheer genius. Why I don't know but it puts me in mind of the famous illustration by Tenniel in Alice Through the Looking Glass of the countryside laid out like a chess board. Who knows if Carroll's description was influenced by reading the poem? It's such a striking, and unusual, but accurate description. Wordsworth deviates really only once from Dorothy's words using 'split' instead of 'cleave'.

'...He looks around, the clouds are split
Asunder, and above his head he views
The clear moon, and the glories of the heavens.'

The choice of 'split' rather than 'cleave, underlines the dramatic moment when 'the musing man', as it were, sees' the night sky for the first time. Placing the adverb 'Asunder' on the next line adds to the drama of the moment especially with the comma that follows. The man pauses, sees the cloud are rent apart---which emphasises now he sees the glories of the heavens.

I have been lucky enough to see the night sky above Grasmere on a cold, crisp March evening. The never ending profusion of stars is breathtaking and, as far away as they are, one gets the sense, unbelievable I know, of also being within one's grasp.

A peaceful and happy Christmas to you, Stephen. And also to all who leave comments here. May you all be well and happy.

Mr Harrow: Thank you very much for visiting again, and for your observations on "A Night-Piece."

I wasn't familiar with Tenniel's drawing, but now I have found an image on the Internet: I see what you mean. I agree that "chequer" is a wonderful choice of words, and I can see why it would have caught William's eye when he read Dorothy's journal entry. (As well as the rest of her wonderful description, of course.) Their souls were in tune with one another. You are probably already aware of it, but, if not, I recommend Lucy Newlyn's book William and Dorothy Wordsworth: 'All in each other' (Oxford 2013), which provides an illuminating examination of their relationship.

How lucky you are to have seen the stars while at Grasmere. I have not seen them there, but, as I mentioned in a recent post, I have seen them in places unpolluted by urban light (e.g., the Cook Islands and the Sierra Nevada). I understand completely what you mean when you speak of the contrast between the infinite number of stars and the sense that you can grasp them: in a deep "black-blue vault" without city lights you do feel that they are within reach.

Sam Vega: Thank you very much. And thank you as well for the thoughtful wishes for all of our commenters.

And, from me, to all commenters and to all readers (commenters or not): Merry Christmas and Happy New Year! I would not be able to do this without the presence and good will of each of you, for which I am deeply grateful.