I have always been fond of sparrows -- those dappled, cheerful, humble creatures.  So the thought of the soul as a sparrow passing "from cold to cold" during our flitting, fleeting time on earth is, for me, a lovely and congenial one.

Birds are, in general, well-suited to serve as emblems of the soul, don't you think?  Today a huge blue sky suddenly appeared, mottled with high, sunlight-filled swathes of white fish-scale clouds.  It could have been a mid-summer's day.  I thought of the skylark, that sprite of the upper air.

In the midst of the plain
Sings the skylark,
Free of all things.

above the moor
not attached to anything
a skylark sings

Blyth and Ueda differ most markedly in their translation of the middle phrase of Basho's haiku: "mono ni mo tsukazu."  Mono means "thing."  In this context, ni means "to" and mo means "even."  Tsukazu is a negative form of the verb meaning "to be attached."  Hence, the phrase might be translated (extremely roughly) as: "to thing not even attached."

Ueda's translation is, therefore, closer to the literal meaning.  Blyth takes more liberties with "free of all things" (including moving the phrase to the end of the haiku).  But I think that both interpretations are lovely, and I find it difficult to choose between the two.  And I think they both capture the essence of the haiku (which, of course, best remains unspoken). 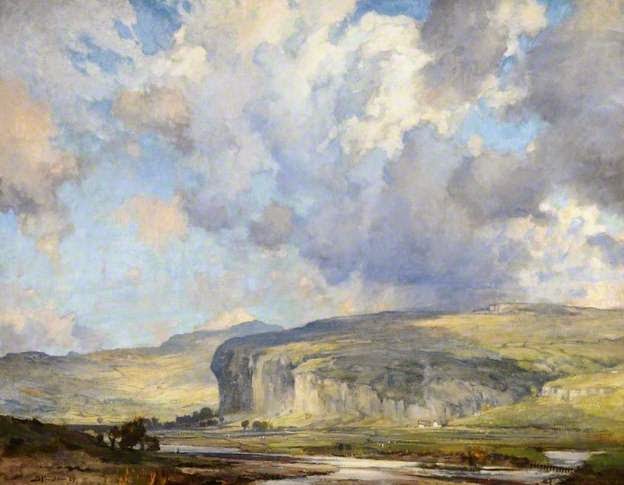 I'd say that the skylark and the nightingale vie for the honor of the bird most apostrophized by William Wordsworth and the other Romantic poets. (Come to think of it, this may be true of all poets.)  Both birds make an appearance in the following poem by Wordsworth.  They are not explicitly linked to the human soul.  However, when it comes to Romantic poetry, nearly everything is presumed to be, as a matter of course, either an embodiment, or a reflection, of our souls.  This is not a criticism, merely an observation.

Ethereal minstrel!  pilgrim of the sky!
Dost thou despise the earth where cares abound?
Or, while the wings aspire, are heart and eye
Both with thy nest upon the dewy ground?
Thy nest which thou canst drop into at will,
Those quivering wings composed, that music still!

Leave to the nightingale her shady wood;
A privacy of glorious light is thine;
Whence thou dost pour upon the world a flood
Of harmony, with instinct more divine;
Type of the wise who soar, but never roam;
True to the kindred points of Heaven and Home!

The poem was composed in 1825.  When it was first published in 1827, it contained the following additional stanza after the first stanza:

To the last point of vision, and beyond,
Mount, daring warbler! that love-prompted strain,
('Twixt thee and thine a never-failing bond)
Thrills not the less the bosom of the plain:
Yet might'st thou seem, proud privilege! to sing
All independent of the leafy spring.

After 1843, Wordsworth removed the stanza in editions of his Poetical Works.  To me, the stanza seems somewhat diffuse, and detracts from the comparison between the skylark and the nightingale, as well as from the "Heaven and Home" theme.  I think that the poem is better without it. (However, Wordsworth did make use of the stanza: he inserted it in "A Morning Exercise.") 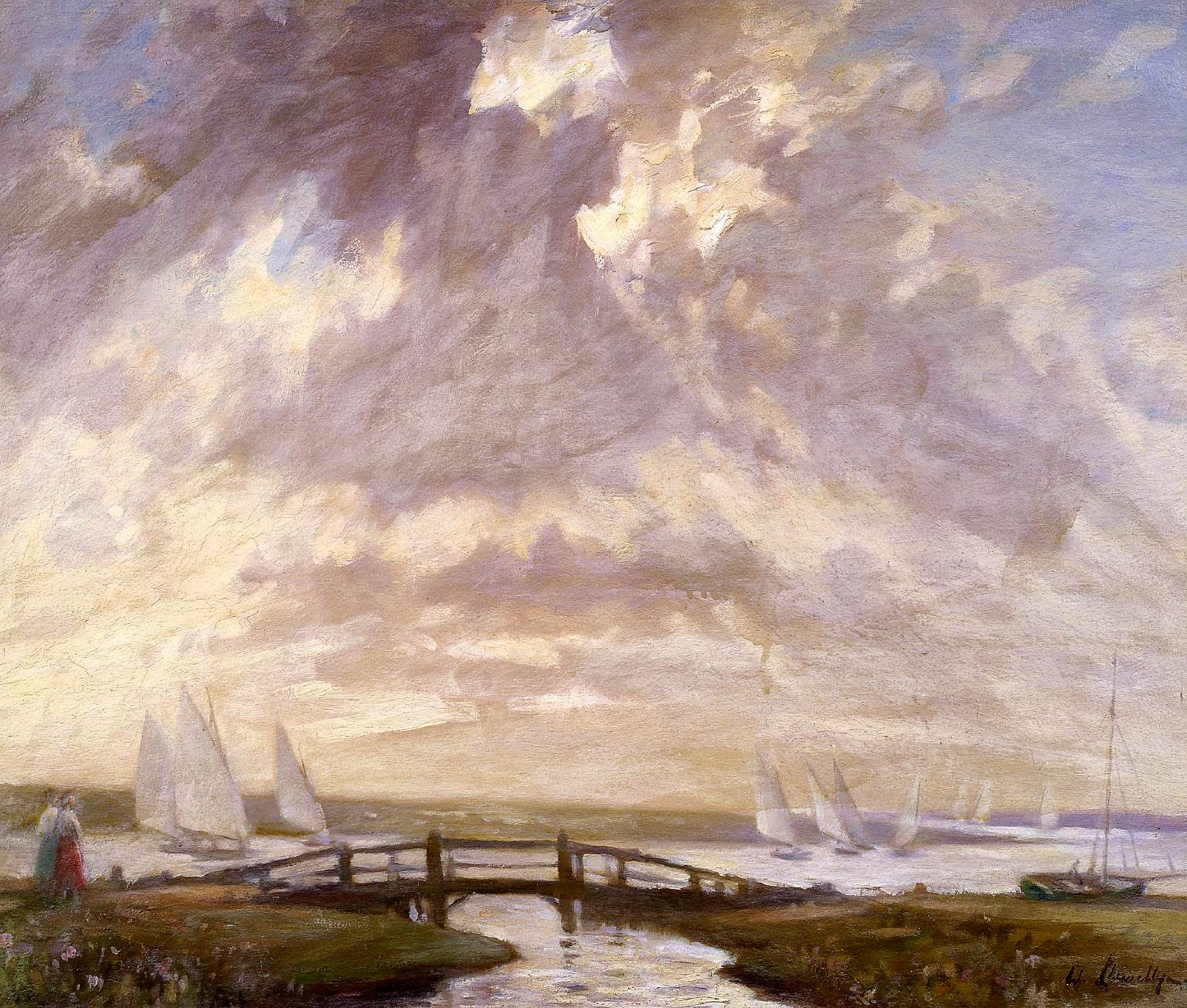 A singing firework; the sun's darling;
Hark how creation pleads!
Then silence:  see, a small gray bird
That runs among the weeds.

"The lark ascending" is the phrase that we are accustomed to see.  (When I see that phrase, I immediately think of Ralph Vaughan Williams's beautiful composition with that title, which was in turn inspired by George Meredith's poem of that name.)  Blunden accomplishes a great deal in a small space.  If we removed the second line, we would have something that looks and sounds a great deal like a haiku. 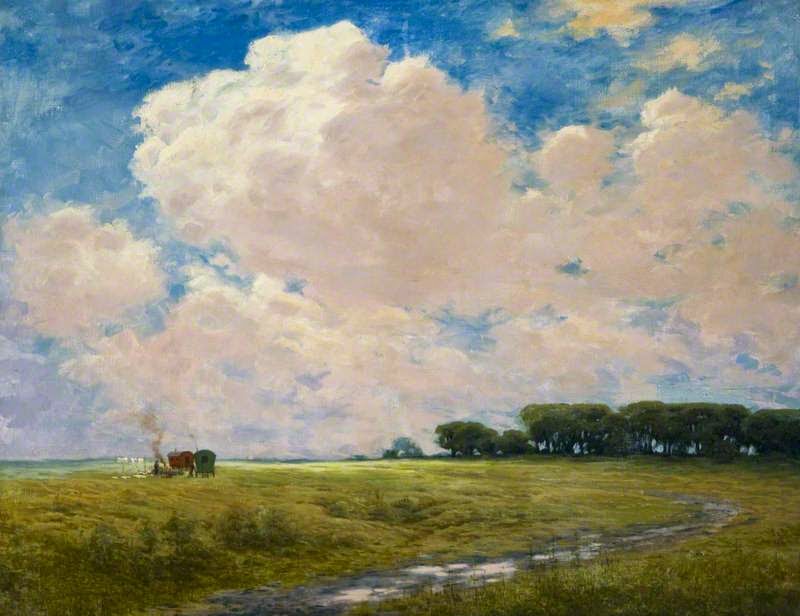 A theme begins to emerge, doesn't it?  The skylark is earthbound, yet drawn towards the heavens, singing.  Perfectly at home in both places, it would seem.

Here is another translation:

However, when considering the skylark as an emblem of the soul, it is perhaps best to conclude with this, which adds the necessary element of irresolvable mystery that each of us carries with us.

The skylark:
Its voice alone fell,
Leaving nothing behind. 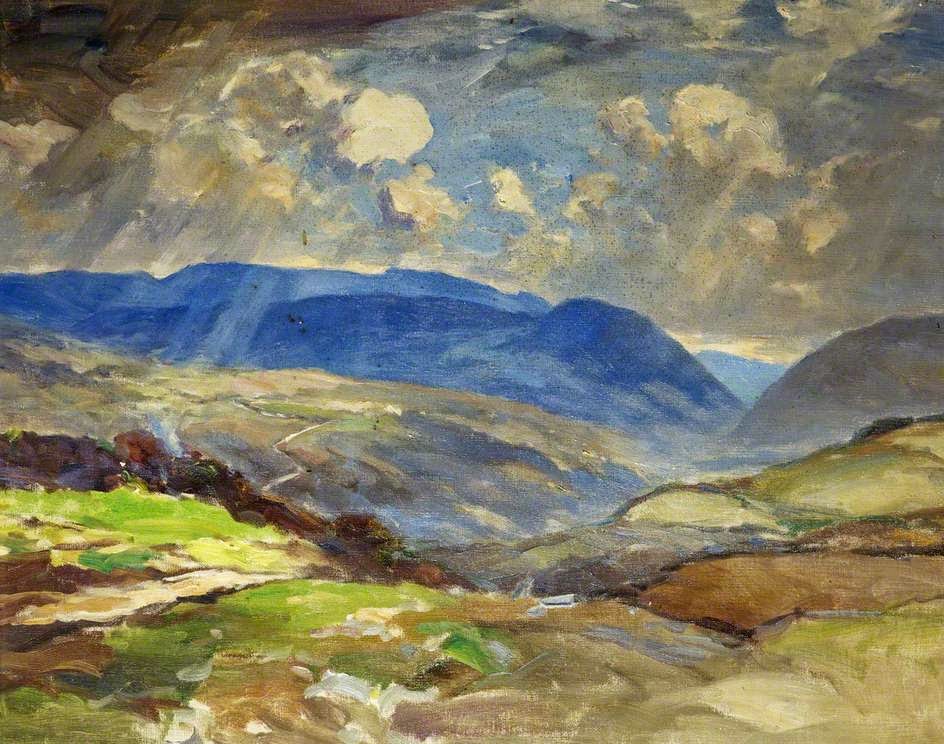 What a delightful post, there are so many wonderful things here. The Basho haiku, the few short lines of Blunden, and the final haiku of Ampu which is one to be read,read again and then time given to it afterwards.
In light of your mention of Vaughan Williams ( a favourite of mine too) I read again Meredith's Lark Ascending which I'd not read for a long time and which has some beautiful lines;

"He rises and begins to round,
He drops the silver chain of sound
Of many links without a break,
In chirrup, whistle, slur and shake,
All intervolv’d and spreading wide,"

Two days ago I was taking a walk along a path I ofen walk on my way to some local woods and all along the length of the path there were sparrows and blue tits flitting in and out of the spaces in the hedgerow left by the leaves that have fallen during autumn and winter. There is always such a sense of joy to see and be present among these ordinary, extraordinary creatures.It was a beautiful day and the light on the heaped, fallen leaves between the trees, and the bark of the silver birches was, as it almost always is beyond my poor abilty with words to adequately describe.

In one of his most beloved sonnets, number 29, Shakespeare uses the lark, rising from the air at sunrise and rising into the air until it sings at heaven's gate, as a simile to describe how love remembered chases away self-loathing and despair. The lark, like the nightingale, is much more than a bird in English and American poetry.

When, in disgrace with fortune and men's eyes,
I all alone beweep my outcast state
And trouble deaf heaven with my bootless cries
And look upon myself and curse my fate,
Wishing me like to one more rich in hope,
Featured like him, like him with friends possess'd,
Desiring this man's art and that man's scope,
With what I most enjoy contented least;
Yet in these thoughts myself almost despising,
Haply I think on thee, and then my state,
Like to the lark at break of day arising
From sullen earth, sings hymns at heaven's gate;
For thy sweet love remember'd such wealth brings
That then I scorn to change my state with kings.

Mr Ashton: As always, thank you for the kind words. I agree with you about Ampu's haiku: I have never gotten to the bottom of it, and I don't think I ever will.

Thank you for the lines from Meredith's poem, which I ought to visit as well.

I'm pleased that you mentioned blue tits in tandem with sparrows. Coincidentally, last week I read Norman MacCaig's "Blue Tit on a String of Peanuts," which captures their essence wonderfully. As we have discussed in the past, it is often these "ordinary" scenes that one encounters on daily walks that are the most extraordinary, if we pay attention.

Anonymous: Thank you very much for the wonderful lines from Shakespeare, which go quite well here. I particularly like "sings hymns at heaven's gate."

As you suggest, we have hardly scratched the surface when it comes to larks!

Fred: Thank you very much: the haiku and Blunden's poem are perfect companions. I have come across a few haiku by Onitsura in Blyth's books, but not this one. I appreciate your sharing it. Another instance of common themes being shared throughout the world.

Aha, what a lovely post! Thanks for brightening my day. I love skylark poems AND thrush poems (you could spend a lot of time on those too! :) ). Your choices were all new to me, which added enjoyment. My favorite skylark poem is Hopkins' 'The Caged Skylark,' which also treats the soul/body theme and the longing for a time when we, like the lark, will be "perfectly at home in both places" - heaven and earth - as you so aptly remarked in your post. Thanks again for bringing me around to what's real! :)

SolanusGirl: Thank you. I appreciate your kind words.

I agree with you about thrushes. In fact, I had thought to add a brief comment about them in the post, but I felt it was getting too long. As you suggest, I will no doubt come to them in the future.

Thank you for mentioning Hopkins' "The Caged Skylark." As you may have noticed, I posted his "The Sea and the Skylark" back in December. And "The Caged Skylark" brings to mind another subject on which there have been numerous poems over the centuries: caged songbirds.

Stephen
I totally agree with John Ashton's words - there is a sense of joy amidst birds and nature.
Your words struck a chord with me "birds are well-suited to serve as emblems of the soul".
We are very fortunate in that we get sightings of kingfishers from time to time - these we see as a sign from our late son who was a fisherman and saw kingfishers along our river.
Our last sighting was on Christmas morning when we took roses down to the river for our son - it gave us joy,comfort and hope.
Thank you for your extraordinary blog - it is a total delight.
Pam

Ms Jones: That is a touching and lovely way to remember your son. Thank you very much for sharing it. Seeing a kingfisher beside a river is indeed a fitting setting in which to recall him and the things that he loved.

And thank you very much for your kind words about the blog. I appreciate your taking the time to visit and comment.