A week or so ago, I read this haiku:

The blossoms have fallen:
Our minds are now
Tranquil.

The lines in Japanese which Blyth renders as "our minds are now tranquil" contain the words hito-gokoro (which may be translated as "human mind, heart, soul, or core") and shizuka (which may be translated as "calm, quiet, peaceful, or still").  The kanji (Chinese characters) used for these words convey all of these different senses at once.  Choosing a single English word for each kanji is a compromise that had to be made by Blyth, and I am not in a position to second-guess him.

Blyth suggests that Koyu-ni's poem may have its source in a waka written nearly a century earlier:

Were there no cherry blossoms
In this world of ours,
The hearts of men in spring
Might know serenity.

However, this does not mean that Koyu-ni simply recast Ariwara no Narihira's poem into a haiku:  her poem is the product of a moment of awareness, and her memory of the earlier poem was part of that moment of awareness.  This is something akin to writing a poem about a loved one who has passed away and having Wordsworth's "A slumber did my spirit seal" come to mind at the same time. 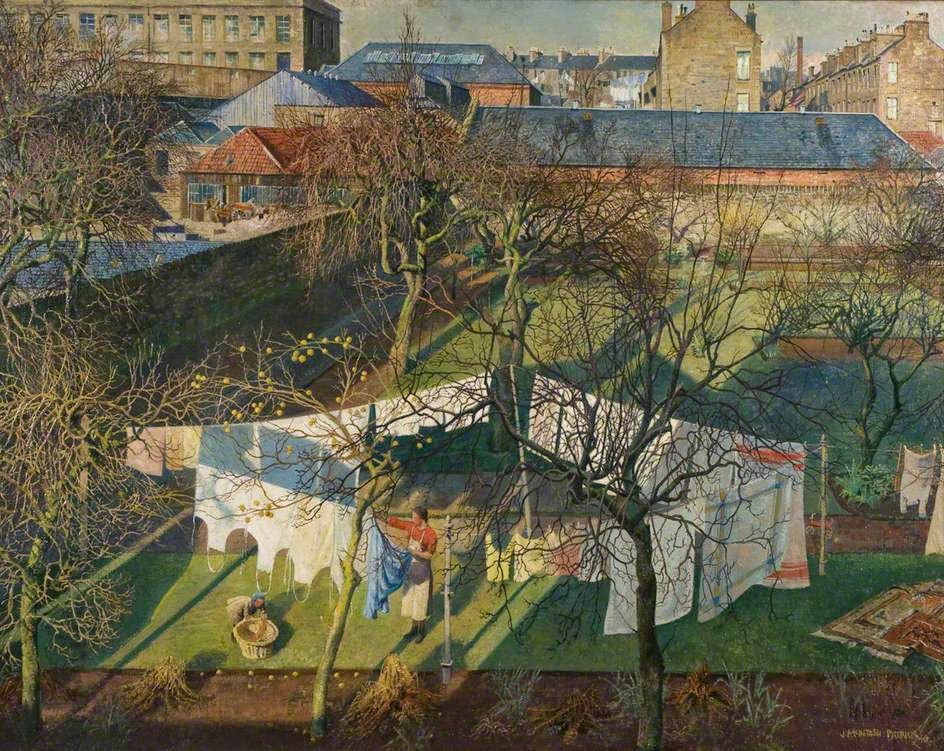 The cherry trees and plum trees have been in full blossom here for the past few weeks, and their petals are now beginning to fall.  Hence, I have been mulling over Koyu-ni's haiku quite a bit, while being mindful that one mustn't think too much about haiku:  they speak for themselves.

When the petals vanish, the beauty vanishes, but a reminder of transience (ours, the world's) vanishes as well.  (Although transience never vanishes; it only changes form.)  Thus:  "Our minds are now tranquil."

On the other hand, she may simply have been thinking of the joy that accompanies the sight of the blossoming trees:  the beauty makes it hard to keep one's wits.  Tranquillity follows excitement.

But I do not intend to bind Koyu-ni to this single moment of awareness captured in a haiku.  I will presume to say on her behalf that this moment was, for her, part of all that is passing, and that this was a fact she was well aware of.  There is a larger context to the falling petals and the falling leaves.

What a strange thing,
To be thus alive
Beneath the cherry blossoms!

Here is another way of looking at it:

To wake, alive, in this world,
What happiness!
Winter rain.

The autumn wind is blowing;
We are alive and can see each other,
You and I.

Wonder and gratitude are at the heart of all haiku. 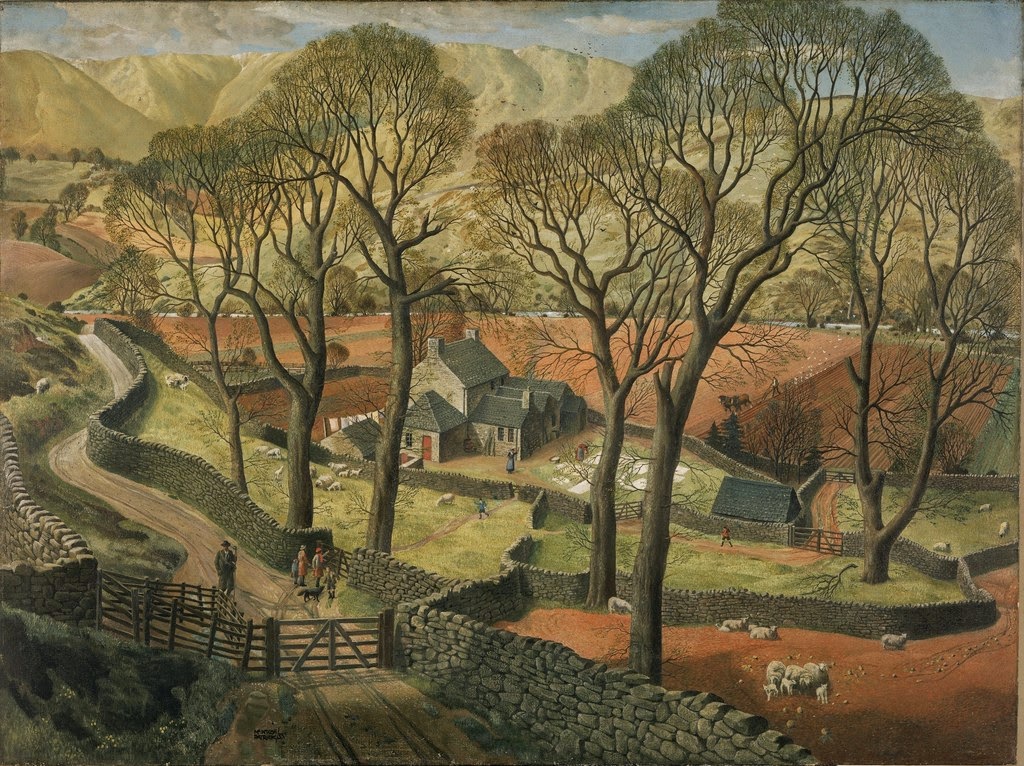 The larger context includes, of course, mortality.  "There will be dying, there will be dying,/but there is no need to go into that."  (Derek Mahon, "Everything Is Going To Be All Right.")  If we wish to be dramatic (but nonetheless accurate), we can say that the petals and the leaves are whispering "Death" as they spin to earth.  Albeit beautifully.

Here, again, is that larger context.

If we are lucky -- very lucky -- we may one day, for a moment, experience the tranquillity of which Koyu-ni speaks. 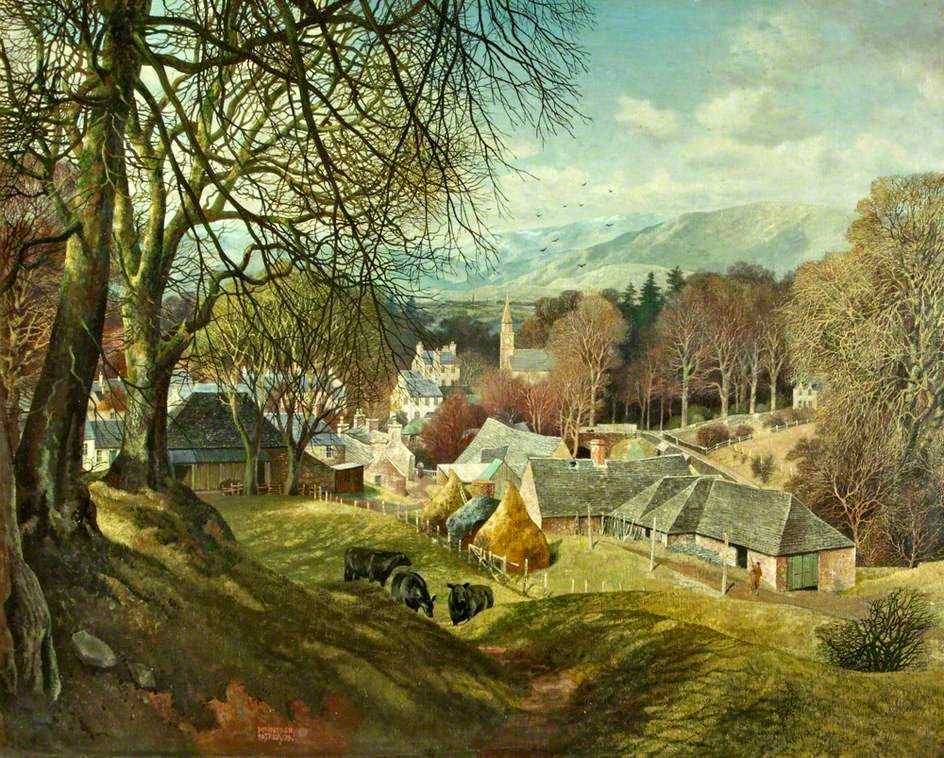 I have always enjoyed the blossoms in spring, but I think perhaps because I am aging a bit, I am more and more aware of their fragile impermanence. It reminds us that life is meant to be enjoyed but for a brief moment in time. So many thoughts here.....but I will leave it with 'thank you'.

You say:
"Wonder and gratitude are at the heart of all haiku."

That is a wonderful distillation and explanation.

You've again given me much to ponder with another feast for the eyes and soul. Thank you.

Have a beautiful day.

What a wonderful post Mr Pentz.
It says so much that my own words seem superfluous,other than to add that wonder and gratitude should be at the heart of our own lives too.

The last one is my favorite of all those you were kind enough to share with us. Many thanks.

Ms White: You're welcome, and thank you for sharing your thoughts. I agree with you that, as we age, we begin to have a greater awareness of the impermanence of all things (ourselves included!), and perhaps learn to pay closer attention to these things.

Thanks again. I appreciate your stopping by.

R.T.: As ever, thank you very much for visiting, and for your kind words. I go through periods when I immerse myself in haiku, and I thought that these were worth sharing, especially since they fit so well with the feeling of the season.

Thank you again. It is always good to hear from you.

Mr Ashton: Your kind words are greatly appreciated. Reading the old Japanese haiku masters always awakens in me a feeling of wonder and gratitude. They force us (gently) to look closely at all that is around us, and this leads to your apt observation "that wonder and gratitude should be at the heart of our own lives too." Caught up in our day-to-day concerns, we often fail to appreciate how fortunate we are.

As always, thank you very much for visiting. I hope that you have been able to get out and enjoy the English Spring.

Ms Halliger Otvos: Thank you very much for your kind words about the post, and for taking the time to visit and comment. I'm pleased that you like the haiku; it was a pleasure to put them all together in one place.

Thank you for these lovely haiku. It is so true about wonder and gratitude being the heart of haiku. And that is what leads us to tranquility, I think, and thus joy.
Mary

Mary: You're very welcome. And thank you for the kind words. I'm pleased you like the haiku. Your point about wonder and gratitude leading to tranquillity and joy is perfect. That is usually the progression for me when I read haiku (and it even occurs with haiku that may have a dark subject matter).

As always, it is very nice to hear from you. I hope you are enjoying the Spring -- and the blossoms, of course!

Rilke (see below) says that only the "won-back heart" can find true serenity. It must be earned. It's a state Wm. Blake called "organized innocence." It cannot be found without going through the world of experience, the annealing fire of life.


Dove that ventured outside, flying far from the dovecote:
housed and protected again, one with the day, the night,
knows what serenity is, for she has felt her wings
pass through all distance and fear in the course of her wanderings.

The doves that remained at home, never exposed to loss,
innocent and secure, cannot know tenderness;
only the won-back heart can ever be satisfied: free,
through all it has given up, to rejoice in its mastery.

Being arches itself over the vast abyss.
Ah the ball that we dared, that we hurled into infinite space,
Doesn’t it fill our hands differently with its return:
heavier by the weight of where it has been.

Oh, but I think you ARE in a position to second-guess. And so am I. Let's go with Heart, shall we? :)

Either way, I am reminded of Kenneth Rexroth's lovely lines, which he pretended he was translating from the Japanese:

"Between the setting sun and the rising moon,
A line of brant write the character 'heart.'"

I have seen this phenomenon, myself, where four flying birds form the four-stroke character "kokoro."

Anonymous: Thank you for sharing the poem by Rilke, which is new to me, as well as the reference to Blake's "organized innocence" (although I confess that Blake's ideas usually leave me befuddled).

I'll have to think further about how the "won-back heart" and "organized innocence" relate to the tranquillity, calmness, and serenity that one finds in haiku (and in Buddhism, Taoism, and other Eastern philosophies). My sense is that Westerners (of which I am one) tend to overdramatize and overthink these things. This is a generalization, but haiku and Eastern philosophy tend to say: everything is right in front of our nose, if we just look.

Esther: Thank you very much for sharing your thoughts. Yes, I suppose that I would choose "heart" or "soul" over "mind" if I were translating (of which I am incapable). But "kokoro" is a wonderful word, isn't it? It encompasses all of the above, and more. A good example of why translation is always an approximation.

I love the idea of flocks of birds creating kanji -- and Rexroth's poem (which is new to me) is wonderful. Of course (as you know), the kanji for "kokoro" is embedded in the center of the kanji for "love."

As always, it is very nice to hear from you. Thank you for stopping by again.