I can assure you that my fondness for April is not attributable to the fact that I was born in this month (an Aries born in the Year of the Monkey). No, I am fond of April because of its sprightly fickleness:  anything can happen (even snow in some climes).  In my opinion, it is manifestly not "the cruellest month."

William Cowper is in the main correct about both April and life:  "It is a sort of April-weather life that we lead in this world.  A little sunshine is generally the prelude to a storm."  Still, despite its changefulness and "chancefulness" (Thomas Hardy, "The Temporary the All"), I believe that April carries with it an overall sense of blue- and yellow-hued promise.

Now dewy nights again and rain in gentle shower
At root of tree and flower have quenched the winter's drouth.
On high the hot sun smiles, and banks of cloud uptower
In bulging heads that crowd for miles the dazzling south. 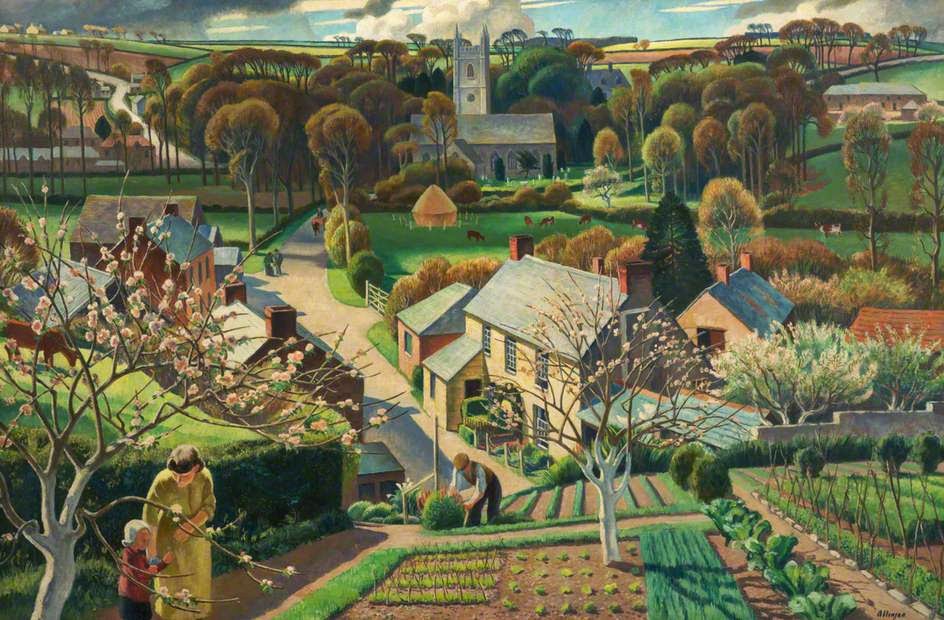 On my afternoon walk yesterday, I noticed that the tulips are beginning to peak.  The daffodils are on the wane.  Sidewalks and green lawns are strewn with the fallen creamy-white petals of magnolia trees.  April is a series of arrivals and departures.

On this first evening of April
Things look wintry still:
Not a leaf on the tree,
Not a cloud in the sky,
Only a young moon high above the clear green west
And a few stars by and by.

Yet Spring inhabits round like a spirit.
I am sure of it
By the swoon on the sense,
By the dazzle on the eye,
By the long, long sigh that traverses my breast
And yet no reason why.

O lovely Quiet, am I never to be blest?
Time, even now you haste.
Between the lamb's bleat and the ewe's reply
A star has come into the sky.

I hadn't noticed this until I placed the two poems together in this post:  "the dazzling south" of Bridges and "the dazzle on the eye" of Warner.  And, coincidentally, Warner employs the same technique of end rhymes and internal rhymes across three lines used by Bridges:  sky/high/by; eye/sigh/why. 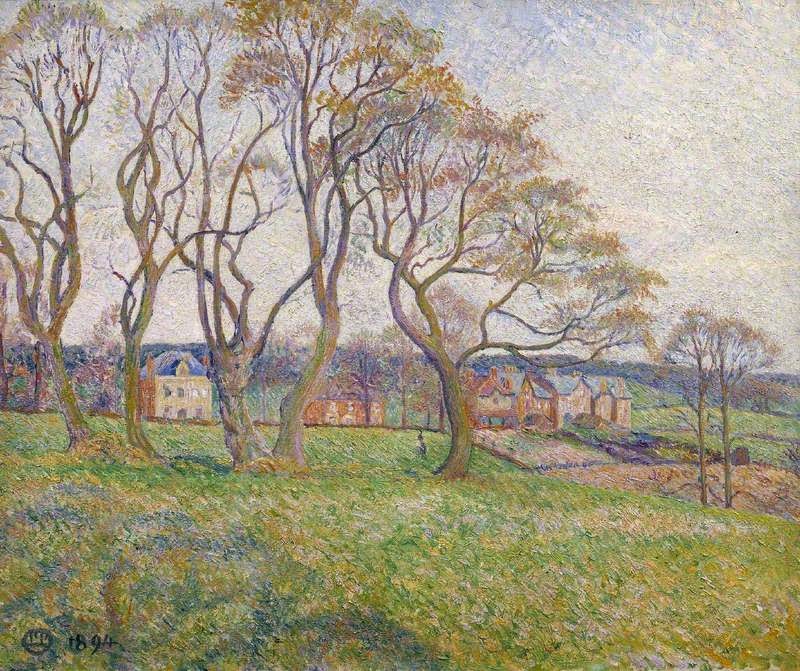 April's mutability is embodied in the trees:  their branches are still mostly bare, but, from a distance, they seem to be enveloped in a yellow-green haze.  Mutability and promise.  "Nature's first green is gold."

Exactly:  where the winter was
The spring has come:  I see her now
In the fields, and as she goes
The flowers spring, nobody knows how. 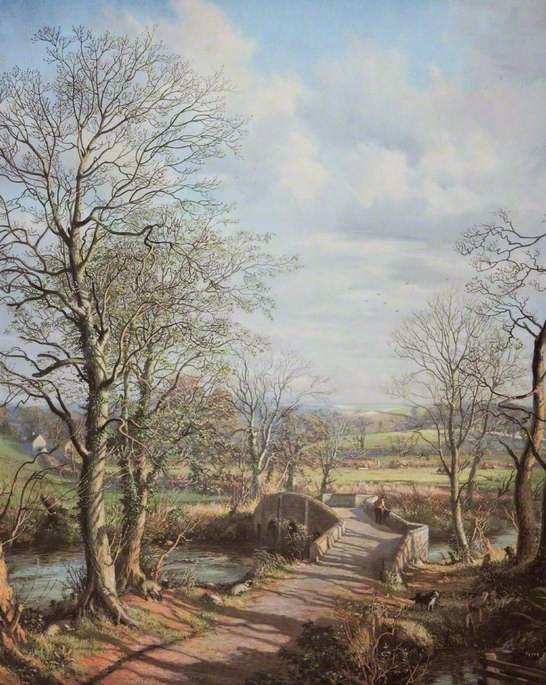 As long-time (and much-appreciated!) readers of this blog may recall, I have a May poem (Philip Larkin's "The Trees"), a November poem (Wallace Stevens's "The Region November"), and an April poem that I annually revisit in each of those months.  Please humor me as we pay a return visit to my April poem. 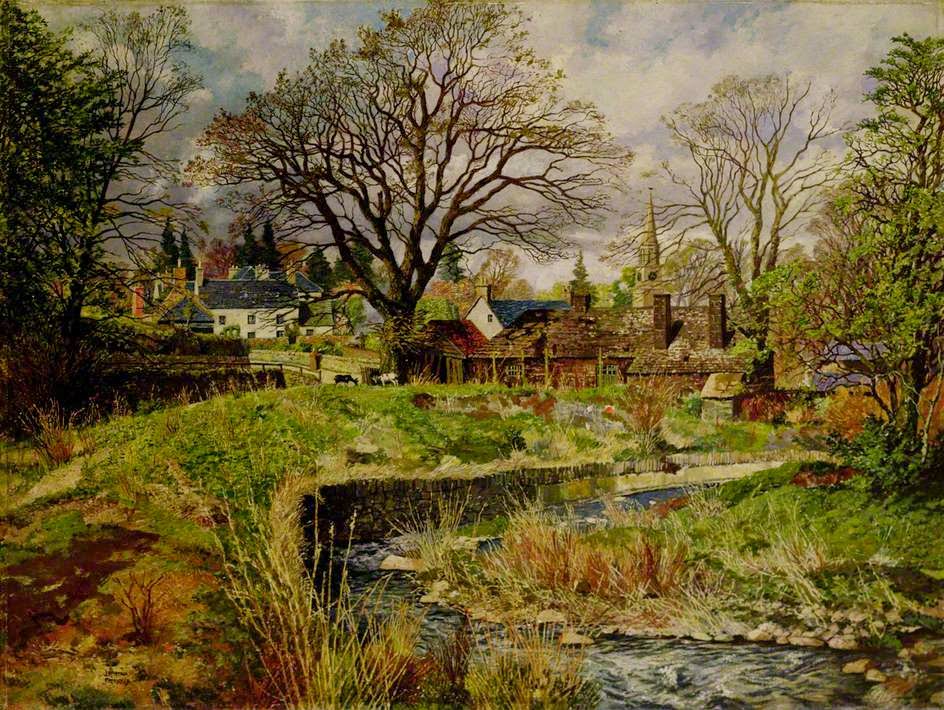 Thanks for introducing me to more April poetry.

I too have a favorite April poem, a haiku, which I post regularly and I want to thank you for reminding me.

April's air stirs in
Willow-leaves. . . a butterfly
Floats and balances

It is that butterfly's balancing act that stopped me the first time I read it. It is suggestive. . . of something.

I continue to be impressed by the poetry and images you share. What a feast for weary eyes and soul! Thank you for your generosity.

An altered look about the hills—
A Tyrian light the village fills—
A wider sunrise in the morn—
A deeper twilight on the lawn—
A print of a vermillion foot—
A purple finger on the slope—
A flippant fly upon the pane—
A spider at his trade again—
An added strut in Chanticleer—
A flower expected everywhere—
An axe shrill singing in the woods—
Fern odors on untravelled roads—
All this and more I cannot tell—
A furtive look you know as well—
And Nicodemus' Mystery
Receives its annual reply!
--Emily Dickinson

Spring has come to New England and nobody welcomes it more than Emily Dickinson.

In my little patch of the world April has once again kept its promise. The dogwoods and azaleas bloom, creeping toward ripeness. On my walk this morning through the woods I saw skeins of wisteria draping the trees, cloaking them in royal purple. Like Nicodemus, the world is reborn.

The coming of April provides us more revelation that tongue can find words for. It's a drama somehow playing out our fate, exalting us while harrowing us.

Yes, before one knows it fifty springs have come and gone. Hopkins says we should gather the beauty of spring "before it cloy," but one might say just as truthfully, we should immerse ourselves in the magic and wonder of spring before we go into the shadow where no blooms tremble in a gentle breeze at twilight.

Do you know W.D. Snodgrass's "April Inventory"? A bit dated and flippant in some ways, but with its moments:

There is a loveliness persists,
Preserves us. Not for specialists.

(Quoted from memory and probably wrong.)

Another delightful post Mr Pentz and I agree with you, April is cetainly not the cruellest month. This Easter weekend is a perfect example; rain on Good Friday, dense cloud on Saturday, a definite chill on Sunday morning, before warm sunshine in the afternoon and today a beautifully warm and sunny day from the first moment of waking.I've been working on my allotment all weekend to the accompaniment of birdsong and the sun warm on my skin as I dug the earth, planted potatoes and attended to a few other Spring jobs.It's good to see Bridges here,a much neglected poet today, and thank you for the Townsend Warner and the Sisson. Two poems quite new to me.
Just off to put in some more work on my allotment in the company of the birds, the April sun.

Fred: Ah, I forgot to mention April butterflies! Thank you for remedying that defect: Basho's haiku is lovely. I agree that the "balancing act" image is arresting. But I like the April wind in the leaves of the willow as well. And, of course, the two images together are wonderful.

As ever, thank you for sharing your thoughts.

R.T.: You're welcome. I greatly appreciate your kind words. As always, thank you very much for visiting.

Mr Floyd: Thank you for sharing how April is looking (and feeling) where you are. And thank you as well for sharing Dickinson's poem, which nicely captures the feel (and the look and sound and scent) of Spring in general, and of April in particular (in her own inimitable fashion).

Anonymous: Thank you for posting Housman's poem, which appeared here in March in connection with one of Horace's odes. It embodies the loveliness and bittersweetness of the season, doesn't it? Thanks again.

George: Thank you for the reference to Snodgrass's "April Inventory," which is new to me. I found the entire poem on the Internet, and your memory is excellent, save for one word: "exists" rather than "persists." (Although I like "persists" as well.)

Mr Ashton: Your weekend captures the changeableness of April quite well. Things are the opposite here: sunny yesterday, and today grey, with a chilly wind. But there's the charm.

I'm pleased that you like the poems by Warner and Sisson. I've only discovered Warner's poetry (belatedly) in the past year or so, and I have been pleasantly surprised.

As always, it is very good to hear from you. Thank you very much for your thoughts.

For your many readers in England:


I
OH, to be in England now that April ’s there
And whoever wakes in England sees, some morning, unaware,
That the lowest boughs and the brushwood sheaf
Round the elm-tree bole are in tiny leaf,
While the chaffinch sings on the orchard bough 5
In England—now!

II
And after April, when May follows
And the white-throat builds, and all the swallows!
Hark, where my blossom’d pear-tree in the hedge
Leans to the field and scatters on the clover 10
Blossoms and dewdrops—at the bent spray’s edge—
That ’s the wise thrush: he sings each song twice over
Lest you should think he never could re-capture
The first fine careless rapture!
And, though the fields look rough with hoary dew, 15
All will be gay when noontide wakes anew
The buttercups, the little children’s dower,
Far brighter than this gaudy melon-flower!

Anonymous: Thank you for sharing Browning's poem, which always deserves a visit in Spring (whether one is in England or not). Thanks again.