As I have noted on previous occasions, the turning of the seasons is, for me at least (and I suspect for some of you as well), a matter of emotion, not of solstices and equinoxes, or of dates on a calendar.  Thus, out walking this past week, I concluded that spring has departed and that summer has arrived.  This conclusion had something to do with the "fullgrown thickness" of the trees (to borrow from Philip Larkin), and with their deepening greens, greens which stretched in every direction.

"Departing spring" ("yuku haru" in Japanese: yuku is a form of the verb "to go"; haru is "spring") is a traditional seasonal subject of haiku.  Perhaps the best-known "departing spring" haiku appears near the beginning of Matsuo Basho's travel journal Oku no Hosomichi.  (The title has been variously translated as "Narrow Road to the Interior," "The Narrow Road to the Deep North," and "Narrow Road to a Far Province."  Oku means "interior," "deep," "within," or "inner"; hoso means "narrow"; michi means "road"; no is a prepositional particle.  Hence, "Narrow Road to the Interior" is probably the most accurate translation:  it is literal, but it also captures the symbolic implications of the phrase.)

"Very early on the twenty-seventh morning of the third moon, under a predawn haze, transparent moon barely visible, Mount Fuji just a shadow, I set out under the cherry blossoms of Ueno and Yanaka.  When would I see them again?  A few old friends had gathered in the night and followed along far enough to see me off from the boat.  Getting off at Senju, I felt three thousand miles rushing through my heart, the whole world only a dream.  I saw it through farewell tears.

With these first words from my brush, I started.  Those who remain behind watch the shadow of a traveler's back disappear."

Here is another translation of the haiku:

Spring going --
birds weeping, tears
in the eyes of fish. 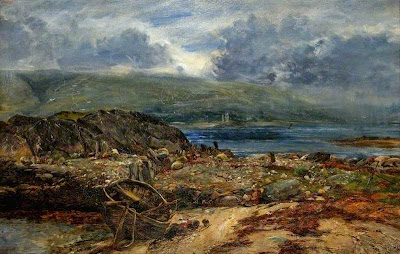 The haiku may perhaps be better understood -- and felt -- if one reads the first few sentences of Basho's brief introduction to Oku no Hosomichi.  The introduction appears immediately prior to the departure scene.

"The moon and sun are eternal travelers.  Even the years wander on.  A lifetime adrift in a boat, or in old age leading a tired horse into the years, every day is a journey, and the journey itself is home.  From the earliest times there have always been some who perished along the road.  Still I have always been drawn by wind-blown clouds into dreams of a lifetime of wandering.  Coming home from a year's walking tour of the coast last autumn, I swept the cobwebs from my hut on the banks of the Sumida just in time for New Year, but by the time spring mists began to rise from the fields, I longed to cross the Shirakawa Barrier into the Northern Interior."

Basho (translated by Sam Hamill), in The Essential Basho, page 3.

This passage illuminates not only the haiku quoted above, but also Basho's life as a whole:  at some point he came to the realization that it was his destiny to be a constant traveler, and to record his travels.  This dovetails with the notion of life as a journey, a notion that came naturally to Basho by virtue of his immersion in Chinese and Japanese poetry, Taoism, and Buddhism. 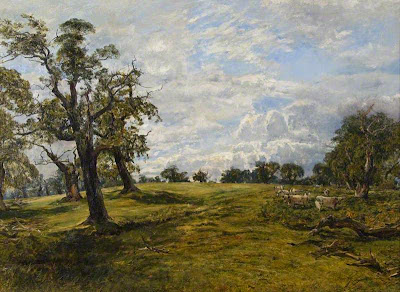 When it comes to the changing of seasons, departures are accompanied by arrivals.  Losses are bittersweet, but there are always compensations.

Cherry blossoms
Fall and float on the water
Of the rice seedlings.

We grieve over the snow showers of cherry blossoms, but -- ah! -- the blossoms fall amid the bright green rice seedlings, aligned in long rows across the water.  (An aside:  my first visit to Japan was during the rice-planting season; as we made our landing approach, we passed over a countryside dotted with rice paddies; I had never seen a green of that hue before.)

A lovely image, but what of the sky?  Do the cherry blossoms (pink, white) fall into sky-blue water?  In the following haiku, Buson takes Kyoroku's image one beautiful step further.

A night of stars;
The cherry blossoms are falling
On the water of the rice seedlings.

"The way up and the way down are one and the same," to paraphrase Heraclitus violently out of context.  Cherry blossoms departing.  Rice seedlings arriving.  High above both of them -- and floating in the dark indigo water with them -- the stars.  Ama no gawa:  River of Heaven. 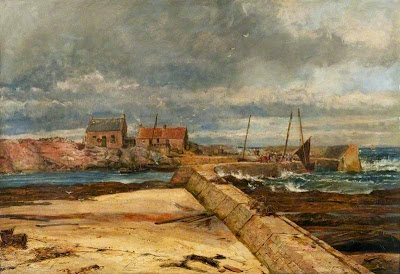 "Every day is a journey, and the journey itself is home."  Ironic moderns have decided that this is a cliché, a risible bit of pop psychology.  They haven't read Basho.  (Or Cavafy, for that matter.)

Today only
Walking in the spring,
And no more. 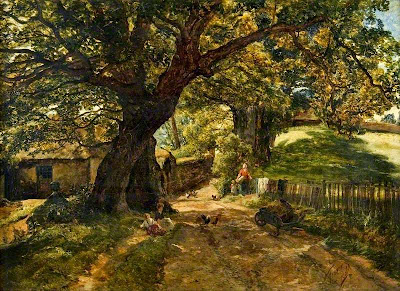 Alexander Fraser, "Barncluith"
Posted by Stephen Pentz at 12:40 AM

Again, I applaud your wonderful and thought-provoking postings! I wonder as I read your offering: do culture living in parts of the world without noticeable season-changes (e.g., equatorial and/or polar zones) indulge very much in similar poetry? This phenomenon seems to be bound to temperate zones. Or am I being too simple-minded in that question/thesis?

R.T.: Thank you very much for visiting again, and for your kind words about the post. I'm pleased you enjoyed it.

You raise an interesting question. My immediate response is that, having been born in, and spent my younger years in, Minnesota, I greatly missed the changing seasons when my family moved to Southern California. Much later, I lived for two years in a tropical area, where, as you suggest, the seasonal changes -- apart from two monsoon seasons -- were hardly noticeable. But perhaps, in both cases, the fault was with me: I may not have noticed subtleties that long-time inhabitants were well aware of. I confess that my knowledge of poetry from "non-seasonal" areas is deficient, so I am not qualified to opine. Yet -- to state the obvious -- change is constant, even if subtle. But there is no denying the impact of the seasons on, for instance, English, American, Japanese, and Chinese poetry. My own poetry-reading habits are linked to the seasons, and I suspect that this is true of many of us.

Thank you again. It is always good to hear from you. Take care.

This was such a lovely post - thank you! One of my most favorite writings is Basho's Narrow Road to the Interior. I have Sam Hamill's translation, a Shambhala Classic publication. Also Donald Keene's and my oldest, a Penguin Classic translated by Nobuyuki Yuasa. I bought that little paperback [with the wonderful portrait of Basho on the cover] back in the 70s in New Hope, PA at the very special Farley's bookstore.
The portrait is by Buson as are the small illustrations within the book. I dearly love this little book, although I like Sam Hamill's translations the best.
How wonderful it must have been to visit Japan. Were you in Kyoto or Nara?
Thanks again, please forgive my rambling on once again.
Mary

Mary: Thank you very much for the kind words about the post. I'm pleased you liked it.

I have a copy of Yuasa's Penguin Classics translation sitting beside me as I write this: it provided me with my introduction to Basho and to Oku no Hosomichi long ago. I am the same as you: the book has great sentimental value for me. I agree with you about Buson's portrait on the cover and his paintings that appear in the text: they increase my fondness for the book. (By the way, R. H. Blyth, who you often see me quote, used Buson's paintings of Basho on the covers of a couple of his Haiku volumes.)

I agree with you that Sam Hamill's translation is probably the best, although Keene's is very good as well. Hamill's The Essential Basho is nice because, in addition to Oku no Hosomichi, it contains three other travel journals: Travelogue of Weather-Beaten Bones, The Knapsack Notebook, and Sarashina Travelogue, as well as a section of "Selected Haiku." The introduction is very good, as is an Afterword in which he recounts Basho's final years. I recommend a collection of essays by Hamill titled Basho's Ghost (which you are probably already aware of).

I have visited Japan four or five times, and I lived in Tokyo for a year in the 1990s. I visited most parts of the country during my visits, including Kyoto (but I missed Nara, unfortunately). Reading Basho makes me want to return!

As ever, it is good to hear from you. Thank you for visiting again, and for your thoughts.

To see the summer sky
Is poetry, though never in a book it lie--
True poems flee--
--Emily Dickinson

Grant me permission to call the above poem a Dickinson haiku.

Thanks for your helpful and interesting response. And I just ordered Basho's Ghost and Crossing the Yellow River...ooh these sagging bookshelves!

Mr Floyd: As ever, you have shared a wonderful Dickinson poem that is a perfect complement to the subject at hand. And, yes, it certainly is haiku-like! "True poems flee" gets to the heart of the matter, doesn't it?

It is always a pleasure to hear from you. Thank you very much for stopping by again.

Mary: Thank you for the follow-up comment. I'm sure you will enjoy the books. In addition to its insightful discussions of Basho, Ryokan, and other Japanese poets, Basho's Ghost provides, I think, a sensitive and accurate impression of Japanese culture, both current and past (although they are always intermingled). Happy reading!