"Thou art a little soul bearing about a corpse, as Epictetus used to say."  So writes Marcus Aurelius in his Meditations, Book IV, Section 41 (translated by George Long).  An earlier translator (Jeremy Collier in 1702) puts it even more colorfully:  "Would you know what you are?  Epictetus will tell you that you are a Living Soul, that drags a carcass about with her."

A startling image, yes, but no cause for distress.  It simply states a fact. Integrating this fact into our daily lives creates an opportunity for freedom. It is ancient news, studiously avoided by most moderns. 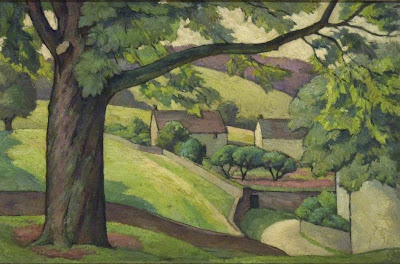 Accurate though it may be, the image of one's soul carrying around a corpse or a carcass may be difficult to come to grips with.  Is it something to idly contemplate as you drift off to sleep, or greet the dawn?  I think not.

Still, we all inhabit "a temporary lodging."  Perhaps, then, this is more palatable:  envision your "little soul" as residing within a dwelling that will one day be abandoned.  Which begs the obvious question:  what will remain of us when the soul has flown?

There once the walls
Of the ruined cottage stood.
The periwinkle crawls
With flowers in its hair into the wood.

In flowerless hours
Never will the bank fail,
With everlasting flowers
On fragments of blue plates, to tell the tale.

Here once flint walls,
Pump, orchard and wood pile stood.
Blue periwinkle crawls
From the lost garden down into the wood.

The flowerless hours
Of Winter cannot prevail
To blight these other flowers,
Blue china fragments scattered, that tell the tale.

The rhyming of "flowerless hours" is risky, isn't it?  But lovely.  I can understand why Thomas retained this phrase, while changing nearly everything else.  His revisions to the lines about the china fragments are interesting.  He abandons "everlasting flowers/On fragments of blue plates" in favor of "these other flowers,/Blue china fragments scattered." Thus, rather than painted flowers on pieces of broken china, we have blue fragments of china scattered on the ground, replicating the blue flowers of the periwinkle.

So there you have it:  another way of looking at our soul's dwelling-place. Will we leave scattered blue flowers of broken china for posterity? 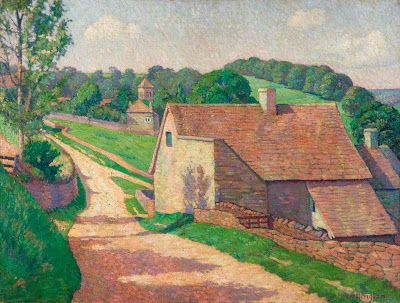 Thomas never directly mentions the prior inhabitants of the abandoned dwelling, but their unspoken presence dominates both versions of the poem:  there is, after all, "A Tale" to be told.  But all that remains is a trail of china fragments on the ground.  And silence.

A new home at the mouth of Meng-ch'eng;
old trees -- last of a stand of dying willows:
years to come, who will be its owner,
vainly pitying the one who had it before?

Wang Wei is the occupant of the "new home."  He will also, in the future, be "the one who had it before."  Vanished.  A subject of speculation and pity.  "Flesh, breath, and the Inner Self -- that is all."  Marcus Aurelius (translated by Gerald Rendall), Meditations, Book II, Section 2.

A corpse, a carcass, a dwelling.  But still the soul flits and flutters.

That man's life is but a dream --
Is what we now come to know. 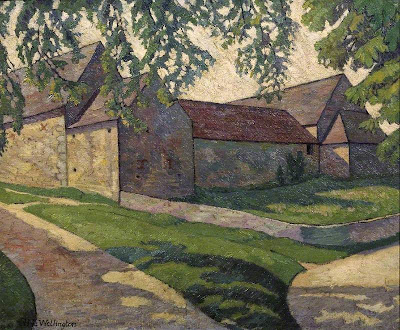 Pardon me for being so vulgar, but I couldn't help thinking, as I read these marvelous poems, of a gospel song that was popular back in the '50s? '60s?--"This Old House."

Thou art a box of worm-seed, at best but a salvatory of green mummy. What's this flesh? a little crudded milk, fantastical puff-paste. Our bodies are weaker than those paper-prisons boys use to keep flies in; more contemptible, since ours is to preserve earth-worms. Didst thou ever see a lark in a cage? Such is the soul in the body: this world is like her little turf of grass, and the heaven o'er our heads like her looking-glass, only gives us a miserable knowledge of the small compass of our prison.


These few lines from The Duchess of Malfi about the soul being caparisoned by mortal flesh are more brutal, less palatable, than the poems you quoted, but, nonetheless, Bosla's words, just before he kills the Duchess, say what more dulcet poems say: the immortal soul is like a bird imprisoned in a cage.
When the death removes the cage, the bird, singing loudly, soars for the sky, his new world amazing the creature.

Fred: The title didn't ring a bell, so I looked it up on Google, where there are numerous videos of various renditions. Now, of course, I remember it. Another piece of ancient popular culture that will disappear with us and the rest of our generation, I suppose! Thank you for reminding me of it -- it does fit well here.

It is good to hear from you. As ever, thank you for stopping by.

Mr Floyd: Thank you for the passage from The Duchess of Malfi, which is new to me. Epictetus's image seems sprightly, almost jaunty, in comparison. "Fantastical puff-paste" is wonderful though. A side-note: the Elizabethan and 17th century poets were preoccupied with us being fodder for worms, weren't they?

As for what happens to the soul after it escapes its cage: I'm not expecting (or seeking) any answer to that conundrum while above ground. It is enough of a struggle to pay attention to the present.

As always, thank you very much for sharing your thoughts, and for stopping by.

AS a dare-gale skylark scanted in a dull cage
Man’s mounting spirit in his bone-house, mean house, dwells—
That bird beyond the remembering his free fells;
This in drudgery, day-labouring-out life’s age.

Though aloft on turf or perch or poor low stage,
Both sing sometímes the sweetest, sweetest spells,
Yet both droop deadly sómetimes in their cells
Or wring their barriers in bursts of fear or rage.

Not that the sweet-fowl, song-fowl, needs no rest—
Why, hear him, hear him babble and drop down to his nest,
But his own nest, wild nest, no prison.

Man’s spirit will be flesh-bound when found at best,
But uncumbered: meadow-down is not distressed
For a rainbow footing it nor he for his bónes rísen.

Hopkins in the above poem (which no doubt you have posted before) compares one's soul to a bird "scanted in a dull cage." One's mounting spirit" dwells in a "bone house, mean house."

Hopkins compares the bird being freed and then dropping "wild" into its own nest, no prison, with one's resurrection, when once more the body will contain the soul, and the body will be no more an encumbrance than is the meadow with the rainbow resting upon it.

In any case, Hopkins, like many other poets, sees the souls of human beings trapped into corruptible flesh, the soul being set free only after dissolution of the flesh.

Anonymous: Thank you for sharing the poem by Hopkins, which is apt in this context, particularly, as you mention, "bone house, mean house." I am not thoroughly familiar with all of his poetry, but I do recall a few other bird poems, including, of course, "The Windhover." They fit well into his view of the course our lives take, I think.