Well, yes, "life is a journey, not a destination."  The statement is often attributed to Ralph Waldo Emerson, but it is not clear that he is actually the source.  I suspect Chinese philosophers were saying something along these lines a few millennia before we in the West got around to saying it.

By now, of course, this old saw seems hopelessly devalued.  But let's face it: old saws are often true.  Moreover, the notion is not simply the stock-in-trade of self-help gurus.  For instance, C. P. Cavafy's wonderful poem "Ithaka" is a variation on the theme, and Cavafy was as unillusioned as they come (in his own dreamy way).  Here are the closing stanzas:

Keep Ithaka always in your mind.
Arriving there is what you're destined for.
But don't hurry the journey at all.
Better if it lasts for years,
so you're old by the time you reach the island,
wealthy with all you've gained on the way,
not expecting Ithaka to make you rich.

Ithaka gave you the marvelous journey.
Without her you wouldn't have set out.
She has nothing left to give you now.

And if you find her poor, Ithaka won't have fooled you.
Wise as you will have become, so full of experience,
you'll have understood by then what these Ithakas mean. 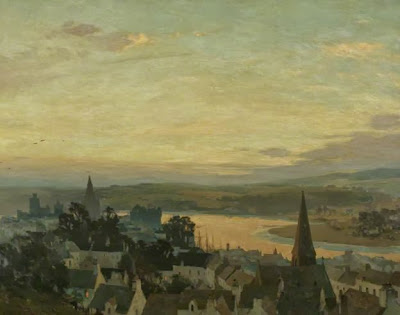 What so pure
as arrivals,
each a promise
of new beginnings?

We step into a place
we've never seen
or a place
where once we suffered.

And silly hope greets us, She says
What a beautiful Spring day
and smiles charmingly
among the falling leaves.

This poem explores the "wherever you go, there you are" conundrum that I have considered in my "No Escape" series.  Dream destinations are not always what they're cracked up to be, are they?  The final stanza is lovely. 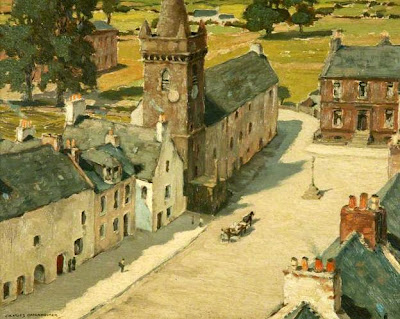 The deception of platforms
where the arrivals and the departures
coincide.  And the smiles
on the faces of those welcoming

and bidding farewell are
to conceal the knowledge
that destinations are the familiarities
from which the traveller must set out.

The poem is a bit reminiscent of T. S. Eliot's oft-quoted lines:

We shall not cease from exploration
And the end of all our exploring
Will be to arrive where we started
And know the place for the first time. 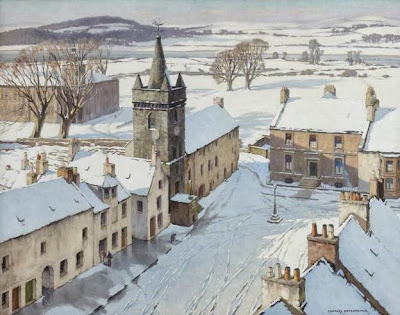 Finally, as is usually the case, Philip Larkin shakes us by the shoulders and says:  "Snap out of it!"

Delay, well, travellers must expect
Delay.  For how long?  No one seems to know.
With all the luggage weighed, the tickets checked,
It can't be long . . . We amble to and fro,
Sit in steel chairs, buy cigarettes and sweets
And tea, unfold the papers.  Ought we to smile,
Perhaps make friends?  No: in the race for seats
You're best alone.  Friendship is not worth while.

Six hours pass: if I'd gone by boat last night
I'd be there now.  Well, it's too late for that.
The kiosk girl is yawning.  I feel staled,
Stupefied, by inaction -- and, as light
Begins to ebb outside, by fear; I set
So much on this Assumption.  Now it's failed.

Philip Larkin, Collected Poems (Faber and Faber 1988).  Larkin wrote the poem in December of 1953, at the ripe old age of 31 (with fear already setting in).

As long-time (and much appreciated) readers of this blog may recall, Larkin can do little wrong in my book.  Thus, I confess that I am fond of this poem, however dreary (or horrific?) it may seem to some.  Here's a thought:  Larkin has condensed Dante's Inferno into a sonnet.  "Midway upon the journey of our life I found myself within a dark wood . . ." 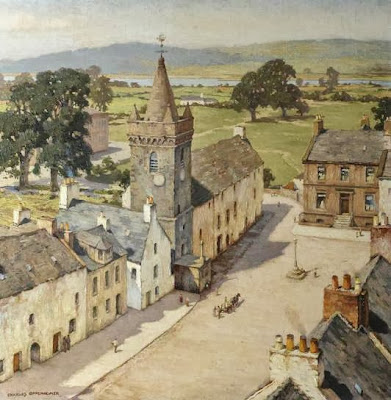 Charles Oppenheimer, "From a Tower, Kirkcudbright"
Posted by Stephen Pentz at 12:10 AM

"The road," said Cervantes, "is always better than the inn" and discovering is more fun than catching up with what has been discovered.

Something in the air perhaps? Autumn maybe?

Fred: thank you very much for the passage from Krutch and Cervantes: it fits well. (And thank you also for the reference to Krutch's book. I've read a few things by him, but I wasn't aware of it. It sounds like an interesting subject.)

I like when these coincidences happen, and the attendant feeling of one thing leading to another, and taking you off in a new direction.

It's very nice to hear from you again.

What have you read by Krutch? I think I've read most of his works.

The title is BAJA CALIFORNIA AND THE GEOGRAPHY OF HOPE. The text is by Krutch accompanying photos of Baja by Eliot Porter. Interspersed are fragments of poetry by Octavio Paz in Spanish with English translation.

Close your eyes and hear the song of the light:
Noon takes shelter in your inner ear

Close your eyes and open them:
There is nobody not even yourself
What is not stone is light

I like the last two lines, sounds even better in Spanish than in English, and I know very little Spanish.

I've posted several excerpts from BAJA on my blog. If you are curious, go click on the Krutch label.
It's nice to find someone else who has read Krutch. It gets lonely out here at times.

Fred: Strangely, the books I've read by Krutch are outside of the nature writing area for which he is now probably best known (and two of them come from his earlier years): a biography of Samuel Johnson (!), The Modern Temper, and The Measure of Man are the only things I've read. I was attracted to the first because of my love of Johnson, and to the second two because of my suspicions about Science's role in the modern world. I enjoyed all of them.

This is why I was interested in your mention of Baja California: I'm ignorant of that part of his writing, which is embarrassing. I will check your blog for the excerpts you mention.

How effectively you link Larkin and Cavafy. You see beyond the superficial differences between the men and detect, quite brilliantly, their similar sensibility in interpreting and evaluating experience. I think both men, neither prone to the usual illusions that humans embrace, wisely warn us of what the journey to Ithaka entails--but both poets understood also that in a fundamental and irrevocable way we never really do escape from our own self-consciousness: "The soul condemned to be / Attended by a single hound / It's own identity."

It's not paradoxical at all that the Cavafy who wrote "Ithaka" could also write "The City." No freight is heavier than that which we store in the subterranean cellars of ourselves:

You said, "I will go to another land, I will go to another sea.
Another city will be found, a better one than this.
Every effort of mine is a condemnation of fate;
and my heart is -- like a corpse -- buried.
How long will my mind remain in this wasteland.
Wherever I turn my eyes, wherever I may look
I see black ruins of my life here,
where I spent so many years destroying and wasting."

You will find no new lands, you will find no other seas.
The city will follow you. You will roam the same
streets. And you will age in the same neighborhoods;
and you will grow gray in these same houses.
Always you will arrive in this city. Do not hope for any other --
There is no ship for you, there is no road.
As you have destroyed your life here
in this little corner, you have ruined it in the entire world.

Yes, I suspect you are correct. JWK is probably best known now for his nature writing.

I first came to JWK through his nature writing. It was only long afterwards that I discovered THE MODERN TEMPER, IF YOU DON'T MIND MY SAYING SO, AND EVEN IF YOU DO, THE MEASURE OF MAN and others.

Anonymous: thank you very much for "The City." I've often felt that it and "Ithaka" are good companions: each of them benefits from being read together, I think.

As for my linking Cavafy and Larkin: thank you very much for the kind words, but I'm afraid I cannot claim any profound forethought or cleverness -- "Autobiography at an Air-Station" just popped into my head. That being said, I agree with your assessment of their shared view of the burden of our self-consciousness as we travel through the world.

A haiku by Basho comes to mind:

Journeying through the world:
To and fro, to and fro,
Harrowing the small field.

Fred: I feel particularly bad about not having read Krutch's books about the desert: years ago, I used to regularly take spring and/or autumn vacations in the high desert of eastern Utah (Moab before it was developed like it is now) and the Four Corners area. I can see why Edward Abbey would have been attracted to his books.