"A Spark Of Fire Within A Beating Clod"

My recent preoccupation with "voices" or "intimations" from the World may leave me open to charges of wishful thinking.  I confess this may be true. At one time or another, I suspect that most of us have sighed:  "Is this all there is?"

Is this wide world not large enough to fill thee,
Nor Nature, nor that deep man's Nature, Art?
Are they too thin, too weak and poor to still thee,
Thou little heart?

Dust art thou, and to dust again returnest,
A spark of fire within a beating clod.
Should that be infinite for which thou burnest?
Must it be God?

"A spark of fire within a beating clod" is very fine indeed.

The yearning for intimations from outside of one's self is captured quite well in:  "Is this wide world not large enough to fill thee?"  Mary Coleridge wrote this poem in 1892.  Given the modern world's predilection for nonstop, superficial distraction and entertainment at all costs, her observation is even more compelling today. 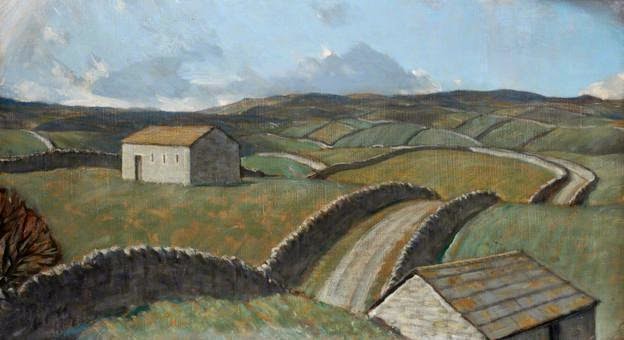 "A spark of fire within a beating clod" brings to mind "animula vagula blandula," which I mentioned in my previous post.  This is the first line of the poem that the Emperor Hadrian (76-138) is purported to have spoken on his death-bed.  The story may be apocryphal, but the poem -- whoever wrote it -- is lovely.

The poem has been translated out of Latin into other languages hundreds of times.  For instance, one can find 116 attempts in Translations, Literal and Free, of the Dying Hadrian's Address to His Soul (published in 1876). Here is Matthew Prior's version, which he describes as an "imitation":

Poor little, pretty, flutt'ring thing,
Must we no longer live together?
And dost thou prune thy trembling wing,
To take thy flight thou know'st not whither?

Thy humorous vein, thy pleasing folly
Lies all neglected, all forgot:
And pensive, wav'ring, melancholy,
Thou dread'st and hop'st thou know'st not what.

Matthew Prior, Poems on Several Occasions (1709).

The reference to "this clay" in the following translation by Byron echoes Coleridge's "beating clod":

Ah! gentle, fleeting, wav'ring sprite,
Friend and associate of this clay!
To what unknown region borne,
Wilt thou, now, wing thy distant flight?
No more, with wonted humour gay,
But pallid, cheerless, and forlorn. 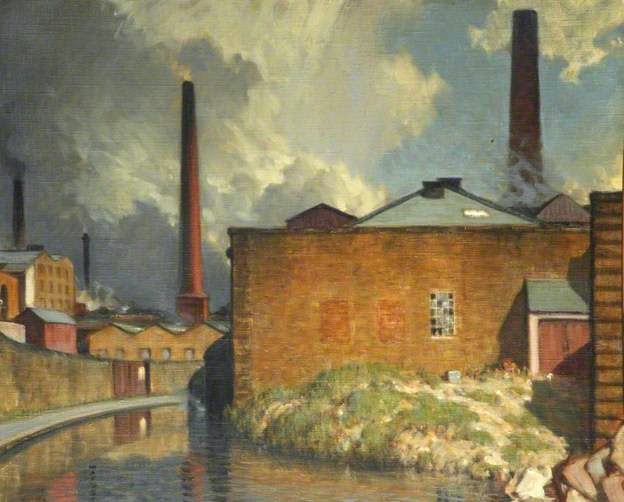 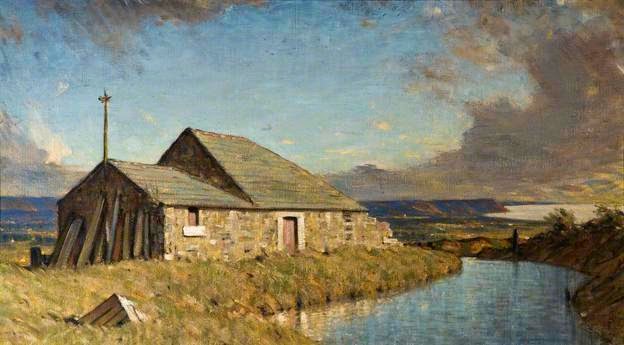 Death, says, Hamlet is "The undiscove'd country from whose bourn / No traveler returns." To think of our fate after we die is to try to unriddle the riddle of them all. The soul may indeed exist, a bright flame that longs to free itself from the fleshy shackles of the corrupt and capricious flesh.

Nobody expresses this view better than Claudio in "Measure For Measure:"

Ay, but to die, and go we know not where;
To lie in the cold obstruction and to rot;
This sensible warm motion to become
A kneaded clod; and the delighted spirit
To bathe in fiery floods, or to reside
In thrilling regions of thick-ribbed ice;
To be imprison'd in the viewless winds,
And blown with reckless violence round about
The pendant world; or to be worst than worst
Of that lawless and incertain thought
Imagine howling; 'tis too horrible!
The weariest and most loathed worldly life
That age, ache, penury and imprisonment
Can lay on nature is a paradise
To what we fear of death.

It could be that Stevens' great poem "Sunday Morning" is a response to Claudio's desperate assertion.

Anyone interested in the effects the promise of death, the toll it takes on human sensibility might want to read Ernest Becker's "Denial of Death."

Anonymous: thank you very much for your thought-provoking comment. You've given us a great deal to ponder. I hadn't heard of Ernest Becker before -- I'll have to look into Denial of Death. On a small point: I like Shakespeare's "kneaded clod" in contrast with Coleridge's "beating clod"!

Do you know this version from the early 20c by J S Phillimore? I found it in an anthology of poems from the Glasgow University Magazine, so it must date from his tenure as Professor of Humanity (Latin). He was a friend of Belloc, who designed his bookplate, with the Virgilian tag 'amor ulterioris ripae' Anyway, here's his Hadrian:

Little slip of a soul, my pretty sweeting,
Whither away truant, whither afresh?
To what new world wilt thou be fleeting,
Lodger and playmate of the flesh?
-- Wan, chilly, naked and diminished,
And all the old fun finished.

One to keep in mind for the end of this month when I shall be taking some pupils to the Castel S Angelo.

Stephen: I think you are undoubtedly right in surmising that, ‘at one time or another . . . most of us have sighed, “Is this all there is?” ‘ And I wonder if this does not particularly relate to those strange ‘plateaus’ that seem to occur in the lives of most of us – and which can last for several years – during which we may be said to be alive, but hardly living. I don’t know; but I’ve been reminded of a sentence in Orwell’s critical essay on Dalí’s autobiography: ‘Some of the incidents in it are flatly incredible, others have been rearranged and romanticised, and not merely the humiliation but the persistent ordinariness of everyday life has been cut out.’ ‘The persistent ordinariness of everyday life’: well, even the island of Cephalonia can lose its magic under a grey rainy sky!

But I’ve also been reminded of these lines from Emerson’s essay ‘Illusions’, from “The Conduct of Life.” ‘How can we penetrate the law of our shifting moods and susceptibility? Yet they differ as all and nothing. Instead of the firmament of yesterday, which our eyes require, it is to-day an eggshell which coops us in; we cannot even see what or where our stars of destiny are. From day to day, the capital facts of human life are hidden from our eyes. Suddenly the mist rolls up, and reveals them, and we think how much good time is gone, that might have been saved, had any hint of these things been shown. A sudden rise in the road shows us the system of mountains, and all the summits, which have been just as near us all the year, but quite out of mind.’

I entirely agree with Anonymous: Ernest Becker's book “The Denial of Death” is a fine study of this subject. I would also highly recommend Becker's “The Birth and Death of Meaning”.

Girders: thank you very much for the version by J. S. Phillimore -- I wasn't aware of it, so I am happy to see it.

It is a nice coincidence as well: I hadn't heard of Phillimore until earlier this year, when I was tracking down the poetry of Crinagoras of Mitylene, who appears in The Greek Anthology. I came across an article on Crinagoras that Phillimore published in The Dublin Review in 1906. (Looking at the table of contents of the issue, I see that Belloc has an article in the same issue.) Then, a few months after that, I came across a letter that A. E. Housman wrote to Phillimore. And now you have given me this.

And thank you as well for visiting and commenting. I hope you will return.

Peter: thank you very much for those thought-provoking observations from Orwell and Emerson. "The persistent ordinariness of everyday life": yes, I agree with you: it does follow us around, even, as you say, in the Cephalonias of the world. Just as, on the other hand, the Hesperides may be in the back garden (thinking of Derek Mahon's poem "The Blackbird").

I ought to have explored Emerson more than I have -- which the passage you shared brings home to me. Whenever I come across something by him, I am usually impressed by its basic common sense.

And now I have a second recommendation of Ernest Becker. Both of the books mentioned by you and Anonymous sound intriguing, which is confirmed by the excerpts I have been able to find on the Internet.

As always, it is good to hear from you. Thank you for stopping by again.

Stephen: I’ve been reading Emerson for decades, but I seriously think – even though I know it will never happen – that anyone starting to read his essays should have at hand O. W. Firkins’ “Ralph Waldo Emerson” (Dover). Although published as long ago as 1915, I doubt that there is any better ‘corrective’ to the inconsistencies, unsupported statements, and sometimes ‘dreadful candour’ of his writing. Emerson had little patience with structure, and his essays read like a series of aphorisms. He was a master of this form of expression: “The true artist has the planet for his pedestal; the adventurer, after years of strife, has nothing broader than his shoes.” The problem is, that Emerson is so pithy, there’s a tendency to ‘swallow him whole.’ Here’s an example of Firkins’ criticism: “Emerson, sitting in his fireproof universe, admires the activity of the torch–bearer and fire–kindlers. The common man’s morals unfortunately are not lined with asbestos.”

Peter: thank you for the follow-up comment, and for the recommendation of the book by Firkins. I have since found Firkins' book on the Internet Archive and what I have seen thus far is quite entertaining. I can see why you would say that one should have it available as a "corrective" as one begins to read Emerson in earnest. Firkins admires him, but he does not pull any punches, does he?

I started by perusing the chapter titled "Emerson as Prose-Writer," and came across this, which echoes your point about Emerson's essays "read[ing] like a series of aphorisms": "But no man is more likely to flash out in the process of a discourse three or four phrases which would stamp both idea and phrase in lasting solidarity on the reader's mind . . . It is the vital phrase in its isolated reappearance in the reader's brooding memory, in its quotation on the alien page . . . that may be most effective in prolonging and diffusing the influence of Emerson." (Pages 272-273.)

Personally, I am fond of aphoristic thought. I am thinking of, for instance, Wittgenstein, La Rochefoucauld, and Leopardi (in his Pensieri). So this characteristic of Emerson is all to the good.