Early last week, I came across this:

With the young trout in the valley
A leaf of the dwarf bamboo
Floats away.

Then, on Friday night, this appeared:

Two lovely trout arriving within days of each other.  The World often provides us with beneficences of this sort.  In my seventh decade above ground, approaching an inevitable return to dust, I am not entirely surprised when these gifts are bestowed from out of the blue.  But I never take them for granted, and I am always grateful.

Mere coincidence, some might say.  Not I.  We place ourselves in the way of serendipity, or serendipity finds us, or perhaps both.  Ah, but where does serendipity come from?  I am content to let the inquiry end with that question.  I have no need for an explanation.  Time will tell.  Or it will not.

One thing is certain:  I would be happy to "glide down the rivulet of quiet Life, a Trout," accompanied by a single fallen bamboo leaf. 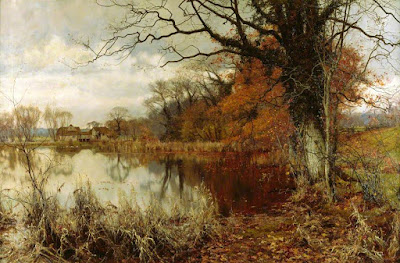 Here is another gift that arrived unexpectedly last week, before the trout made their appearance:

Alfred Tennyson, The Holy Grail and Other Poems (Strahan 1870).  The poem is untitled.

I am very fond of Tennyson's poem, but I have always regretted that he plucked the flower "out of the crannies."  But I understand the impulse, and I don't hold his plucking against him.  "Never pluck a flower again!"  I wonder if Coleridge kept his resolution.

As one might expect, the plucking, pruning, or cutting of flowers is a topic that has been visited by Japanese haiku poets on more than one occasion. This is perhaps the best-known instance:

The well-bucket
Having been taken by the morning glory,
I borrow water.

Yes, it is usually best to leave well enough alone.  Just walk away. 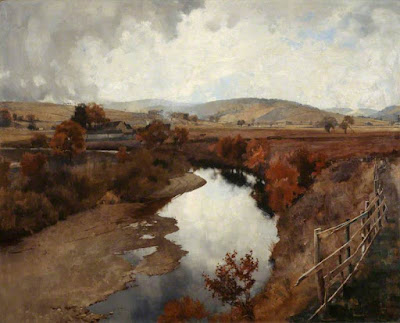 On Thursday, line after line of storms passed through, blown by a strong wind out of the southwest.  In the intervals between rain, the sun appeared, but the wind did not let up.  I took my afternoon walk during one of the blue sky openings.  On the walk, I realized that autumn has indeed peaked: swaths of rattling, tumbling leaves swirled around my feet, then raced away to the north along the road, or curved off into the meadows, which have begun to turn green again with the autumn rain, and are strewn with all shades of yellow and brown and orange.  A beautiful sight in the brilliant afternoon.

Here is something I discovered one morning this past week:

Man's years fall short of a hundred;
a thousand years of worry crowd his heart.
If the day is short and you hate the long night,
why not take the torch and go wandering?
Seek out happiness in season;
who can wait for the coming year?
Fools who cling too fondly to gold
earn no more than posterity's jeers.
Prince Ch'iao, that immortal man --
small hope we have of matching him!

The poem is untitled.  It appears in a collection known as "The Nineteen Old Poems of the Han."  "Han" refers to the Later Han Dynasty, which lasted from 25 A.D. to 220 A.D.  Burton Watson provides this note regarding "Prince Ch'iao" (line 9):  "Wang-tzu Ch'iao or Prince Ch'iao was believed to have become a hsien or immortal spirit."  Ibid, page 102.

The years of a lifetime do not reach a hundred,
Yet they contain a thousand years' sorrow.
When days are short and the dull nights long,
Why not take a lamp and wander forth?
If you want to be happy you must do it now,
There is no waiting till an after-time.
The fool who's loath to spend the wealth he's got
Becomes the laughing-stock of after ages.
It is true that Master Wang became immortal,
But how can we hope to share his lot?

As autumn begins, we may say to it:  "Slow, slow!"  To no avail.  For we always come to this:  "And lo, it is ended."  Next year will be no different. But we mustn't think this will go on forever.  Well, at least not for us. 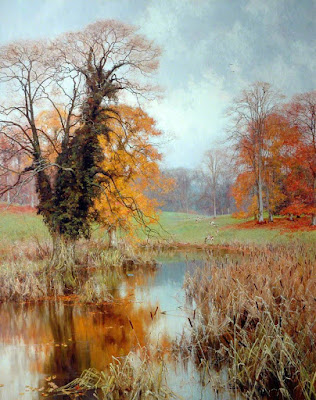 At the end of the week, a book whose publication I have been awaiting arrived in the mail:  The Second Seedtime: Notebooks 1980-1994, by Philippe Jaccottet.  In October of 1992, he makes this entry (a poem, a fragment of a possible poem, or prose; in Jaccottet's writing, the dividing lines often blur):

I going,
You remaining, --
Two autumns. 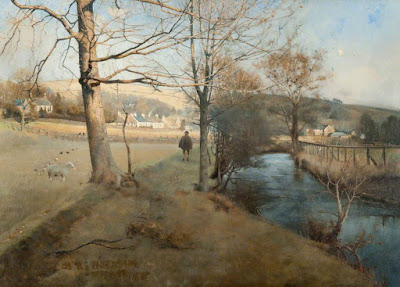 An anonymous poem I came across a while back:

I am colour subtle, muted, tertiary
Think not to know me with palette simple and primary
For I am twilights November
And the gloam in February

Anonymous: Thank you very much for sharing the poem. It is an apt poem for autumn. Although autumn, in addition to having its "subtle, muted, tertiary" colors, has its brilliant, bright colors as well, doesn't it? Which is what makes it so beguiling.

Autumn here has been filled with brilliant colours and an abundance of bright sunlit days through until some heavy rain last weekend.
Only a week ago I was still seeing Red Admiral butterflies and even the occasional large bumblebee on my allotment, such glimpses are indeed wonderful gifts.
I wholly agree with what you say here, “We place ourselves in the way of serendipity, or serendipity finds us, or perhaps both”

Recalling to mind those wonderful opening lines of Norman MaCcaig’s poem, Ordinary Day, which I’m sure you are familiar with;

Isn’t this the wonder of it? We take a walk, or the walk takes us - We’re in that place, at that moment privileged with a brief glimpse. We do not need to know why, and to my mind should never ask the question. It is the miracle of the everyday world all around us. It is more than enough that we have seen and now have that moment in our memory. We walk on.

Only this morning pausing beside a stream while out on a local walk I watched a red deer stag and his group of females moving slowly through wet bronzed ferns and in the near distance an array of colour on the trees which words cannot adequately describe. Such moments, and this time they are autumn’s are what we should always give ourselves time to notice.

Thank you for another wonderful post, so many delights. I always stop by and read, though there are many times, too many of late when I do not have time to reply.

I used to read your blog daily and then, getting occupied with the grind, I forgot. Serendipitously, today, I remembered and this selection of poems and commentary is exactly what I needed. Wonderful. Thank you. I'll keep these poems in mind. JM

John: It's good to hear from you, as always. Thank you for reminding me of MacCaig's poem, which I haven't visited for a while. These lines near the end of the poem match well with your phrase "the miracle of the everyday world all around us," and your lovely description of the deer: ". . . and my mind observed to me,/or I to it, how ordinary/extraordinary things are or/how extraordinary ordinary/things are . . ." I think the poets I love best all share this characteristic, but I think MacCaig is particularly wonderful in noticing, and bringing to our attention, "the miracle of the everyday world all around us." (To use your thought once again.)

Thank you for the kind words about the post. I greatly appreciate your long-time presence here, so please never worry if you cannot find time to comment on a particular post: I fully understand. I hope you enjoy what remains of autumn, which, as you know, has its own special beauties, though they may provoke wistfulness!

Mr. Maruskin: Thank you very much for your kind words. Those lines by Jaccottet are lovely, aren't they?

I'm happy to have you return. As you know, given the nature of what I do here (avoiding the news of the world and its distractions as much as I can), it is easy (I hope) to return at leisure (or if serendipity calls): the poems and the paintings will be here.

Thank you for visiting again. I hope you'll return soon.

looking at this post, I found three old friends -- three autumn paintings that you have featured before. I may also have told you before that "Autumn Coloring" is my favorite; it has an uncanny resemblance to a particular place in Central Park: looking north from the Turtle Pond over the Great Lawn in autumn.
And "Moniave" -- that seemed to me an unusual name. I thought it might be French, but now I see, in the painting I don't remember seeing here before, "Autumn in Glencairn Moniave" that it is in Scotland.
I had a lovely walk in Central Park (a more northern part) yesterday. Our fall color is just about at its mellow peak. Now much colder weather is upon us.
I have been loving your fall posts.
Susan

Susan: I'm pleased you remembered the paintings. They are "old friends" of mine as well: they first appeared here back in October of 2014. I recall you commenting on Waite's paintings when they first appeared: if my memory serves me well, we both agreed on his wonderful ability to capture so perfectly both the color and light of autumn.

I'm happy to hear you've been enjoying the colors in your part of the world. A fair number of leaves are still hanging on here. This final transition into winter is, of course, sad, but, as I said in my response to Mr. Ashton's comment, it comes with its own beauties.

Thank you very much for your kind words about the posts. As ever, it is a pleasure to hear from you.

I must comment once more: I have just read your entry of November 24, 2011, where I again encountered old friends -- two poems titled "Five Minutes". Both are stand-outs. Like Norman MacCaig when he wrote "Five Minutes at the Window", I am now eighty. I have just had a day similar to the one he describes, of mellow contentment with life as it is. I spend a lot of time looking out the window; I'm glad I live on the sixth floor so I can keep an eye on the life of the street. And the books and ornaments in my apartment seem familiar & friendly. Of course I don't feel like this often enough, but MacCaig expresses such moments in balance so well.
My best wishes for a good Thanksgiving, Susan

Susan: Please accept my apologies for the belated response to your comment: the past week has been hectic. Thank you very much for your Thanksgiving wishes: I hope that yours was wonderful.

And thank you as well for reminding me about the two "Five Minutes" poems: it has been too long since I have visited them, and you have now prompted me to do so. They contain a great deal of wisdom, don't they? No matter what one's age, we all should try to appreciate life, and the world around us, in these short spaces of time. But, as you say, we tend not to find these "moments in balance" (to use your phrase) as often as we would like to. But the poets (and the painters) remind us of the need to do so.

As always, thank you for stopping by, and for sharing your thoughts. I wish you a wonderful holiday season.