Of course, autumn is not autumn without Robert Frost.  Earlier this month, I quoted Frost's friend Edward Thomas on the season:  "Now, now is the hour; let things be thus; thus for ever; there is nothing further to be thought of; let these remain.  And yet we have a premonition that remain they must not for more than a little while." (Edward Thomas, The South Country (1909), page 272.)  Thomas wrote his thoughts, and Frost wrote the following poem -- which independently echoes Thomas's thoughts -- before the two first met on October 6, 1913.

O hushed October morning mild,
Thy leaves have ripened to the fall;
Tomorrow's wind, if it be wild,
Should waste them all.
The crows above the forest call;
Tomorrow they may form and go.
O hushed October morning mild,
Begin the hours of this day slow.
Make the day seem to us less brief.
Hearts not averse to being beguiled,
Beguile us in the way you know.
Release one leaf at break of day;
At noon release another leaf;
One from our trees, one far away.
Retard the sun with gentle mist;
Enchant the land with amethyst.
Slow, slow!
For the grapes' sake, if they were all,
Whose leaves already are burnt with frost,
Whose clustered fruit must else be lost --
For the grapes' sake along the wall.

In 1913, Thomas's prose and Frost's poetry still contained archaisms -- Romantic and Victorian -- that would pretty much disappear in Frost's newer poetry and in Thomas's yet-to-be-written poetry.  There is always a danger of over-dramatizing (and over-sentimentalizing) the fateful (in a wondrous sense) meeting of Frost and Thomas, and their all-too-brief friendship, cut short by Thomas's death in France.  But I do think that the year or so that they were able to spend together -- walking and talking -- led to a stripping away and a paring down that is characteristic of their best work. 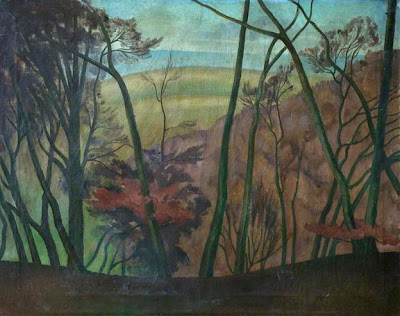