At the beginning of October, I posted the following thought by Edward Thomas on the beauty of autumn:  "The sight of such perfection as is many times achieved before the end awakens the never more than lightly sleeping human desire of permanence."  (Edward Thomas, The South Country (1909), page 272.)  Now, at the end of autumn, it is appropriate to hear from Robert Frost (who, after Thomas's death in France, wrote that Thomas was "the only brother I ever had").  It turns out, not surprisingly, that they shared similar thoughts about the season. 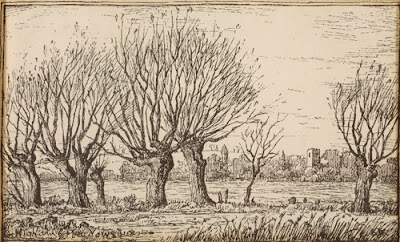 Out through the fields and the woods
And over the walls I have wended;
I have climbed the hills of view
And looked at the world, and descended;
I have come by the highway home,
And lo, it is ended.

The leaves are all dead on the ground,
Save those that the oak is keeping
To ravel them one by one
And let them go scraping and creeping
Out over the crusted snow,
When others are sleeping.

And the dead leaves lie huddled and still,
No longer blown hither and thither;
The last lone aster is gone;
The flowers of the witch-hazel wither;
The heart is still aching to seek,
But the feet question 'Whither?'

Ah, when to the heart of man
Was it ever less than a treason
To go with the drift of things,
To yield with a grace to reason,
And bow and accept the end
Of a love or a season?

(A side-note:  Frost gives us one of his trademark confounding endings, doesn't he?  To wit:  where did "the end/Of a love or a season" come from?  I thought that this was a pleasant meditation on the end of autumn.  How and when did "love" enter the picture?) 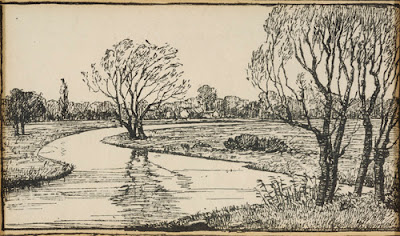 Elizabeth Kenyon, "The River Stour from Stratford St Mary"
Posted by Stephen Pentz at 12:10 AM

Yes, that's typical Frost, isn't it? I think he brings in "love" in the first line of the last stanza--"the heart of man."

Fred: very good point -- which in turn makes me notice that an "aching" heart appears in line 17 just before "the heart of man". Thanks for the thought, and for stopping by again.

'And lo, it is ended' in the first stanza too. If this was just a poem about autumn it would be good, but not thrilling. As it is there's a shiver in that last line.

I love the pictures too - another artist for me to explore! I've been enjoying the John Nash paintings in the previous posts too - thanks

Fred: I had missed it as well, until I retraced my steps based upon your comment. Thanks!

Mr Russell: thanks for your reminder about 'And lo, it is ended.' 'A shiver' is an excellent way to describe the final line.

The line's effect reminds me of what someone (I cannot recall who at the moment) remarked about Hardy's poetry (a paraphrase): you are reading through a poem that seems ordinary, even less than ordinary, until you come to the final lines, which suddenly turn the whole poem around (not in terms of mere surprise, but in terms of what was being built up all along), and you then realize how remarkable Hardy's craft is. The same goes for Frost, I think.

I'm pleased that you like the works by Elizabeth Kenyon and John Nash. (I haven't been able to find out much about Kenyon, but I would like to learn more.)

My favorite poet. As a writer, for me the shock in that poem is the word "treason"! It suddenly opens up a whole world of what we are dedicated to, and have a cellular-level loyalty to, even against our wills.

Shelley: thank you for visiting again, and for your thoughts about Frost. Yes, he is wont to come up with the unexpected word or phrase, isn't he? Not that other poets don't do so as well, but he always seems to slip these things in at the right time, for maximum effect.