Here is one way of looking at how we abide in the world:
"Experience, already reduced to a group of impressions, is ringed round for each one of us by that thick wall of personality through which no real voice has ever pierced on its way to us, or from us to that which we can only conjecture to be without.  Every one of those impressions is the impression of the individual in his isolation, each mind keeping as a solitary prisoner its own dream of a world."
Walter Pater, "Conclusion," The Renaissance: Studies in Art and Poetry (Macmillan 1893), page 249.
I thought of Pater's passage after reading this:
Man in a Park
One lost in thought of what his life might mean
Sat in a park and watched the children play,
Did nothing, spoke to no one, but all day
Composed his life around the happy scene.
And when the sun went down and keepers came
To lock the gates, and all the voices were
Swept to a distance where no sounds could stir,
This man continued playing his odd game.
Thus, without protest, he went to the gate,
Heard the key turn and shut his eyes until
He felt that he had made the whole place still,
Being content simply to watch and wait.
So one can live, like patterns under glass,
And, like those patterns, not committing harm.
This man continued faithful to his calm,
Watching the children playing on the grass.
But what if someone else should also sit
Beside him on the bench and play the same
Watching and counting, self-preserving game,
Building a world with him no part of it?
If he is truthful to his vision he
Will let the dark intruder push him from
His place, and in the softly gathering gloom
Add one more note to his philosophy.
Elizabeth Jennings (1926-2001), Recoveries (Andre Deutsch 1964).
Pater's observation is one of the stepping stones that takes him, two paragraphs (and a few more stepping stones) later, to his well-known prescription for how to live: "To burn always with this hard, gem-like flame, to maintain this ecstasy, is success in life."  (Walter Pater, The Renaissance: Studies in Art and Poetry, page 251.)  But burning with a gem-like flame is not our concern at the moment, dear readers.  (Mind you, I say that as one who is quite fond of Pater.)
Rather, our concern is how to get through "an ordinary Wednesday afternoon" (to borrow from Walker Percy).  In her own quiet, lovely fashion, Jennings shows us a "mind keeping as a solitary prisoner its own dream of a world."  The man in the park may not be a complete stranger to some of us.  I suspect he was not a complete stranger to Jennings.  Like Pater, she goes a step further (but in her own way), and gives us those wonderful, beautiful, and mysterious final eight lines, which seem to be about getting through an ordinary Wednesday afternoon. 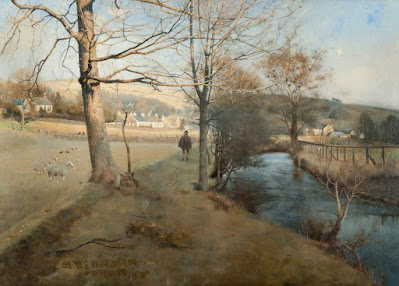 James Paterson (1854-1932), "Moniaive" (1885)
An observation by Thomas Hardy comes to mind: "The most prosaic man becomes a poem when you stand by his grave at his funeral and think of him."  (Thomas Hardy, notebook entry for May 29, 1871, in Richard Taylor (editor), The Personal Notebooks of Thomas Hardy (Macmillan 1978), page 10.)  In saying this, Hardy knew full well that he, too, was a "prosaic man."  (I base this thought on having read accounts of Hardy by those who met him.  Selections of these accounts may be found in Martin Ray (editor), Thomas Hardy Remembered (Ashgate 2007) and James Gibson (editor), Thomas Hardy: Interviews and Recollections (Macmillan 1999).  Both books are delightful.)
Well, we are all prosaic women and men, aren't we?  To think otherwise is self-deception.  Perhaps Elizabeth Jennings' wonderful closing lines are relevant: ". . . and in the softly gathering gloom/Add one more note to his philosophy."  Isn't this a variation upon Hardy's thought?  Are we indeed all strangers to one another?
Lot 304: Various Books
There are always lives
Left between the leaves
Scattering as I dust
The honeymoon edelweiss
Pressed ferns from prayer-books
Seed lists and hints on puddings
Deprecatory letters from old cousins
Proposing to come for Easter
And always clouded negatives
The ghost dogs in the vanishing gardens:
Fading ephemera of non-events,
Whoever owned it
(Dead or cut adrift or homeless in a home)
Nothing to me, a number, or if a name
Then meaningless,
Yet always as I touch a current flows,
The poles connect, the wards latch into place,
A life extends me --
Love-hate; grief; faith; wonder;
Tenderness.
Joan Barton (1908-1986), The Mistress and Other Poems (The Sonus Press 1972).
Joan Barton wrote poems from an early age, but she did not become well-known as a poet until Philip Larkin chose to include one of her poems in The Oxford Book of Twentieth-Century English Verse (Oxford University Press 1973), which he edited.  With respect to "Lot 304: Various Books," it may be helpful to know that Barton was a bookseller for much of her life. 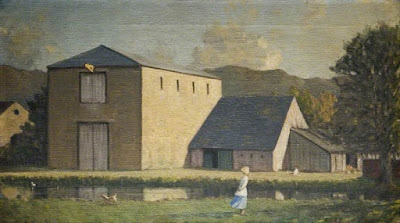 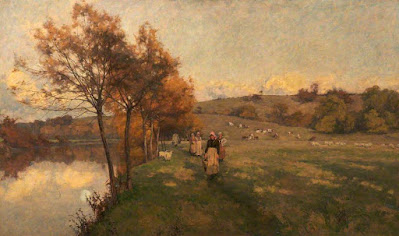 I remember getting scolded for poking holes in the shoji when I was little. In traditional households, one of the year-end sprucening-up rituals even now is the repapering of the honeycombed wooden frames with a fresh new sheet of white shoji paper.

Is it possible to abandon, or to escape from, our "own dream of a world"?

The man in the park doesn't abandon his dream. It's him. Knowing he's excluded from someone else's perspective is just another part of his revelation. He's Hardy's prosaic man living according to Joan Barton's ideas at the end of "Lot 304."

Yet always as I touch a current flows,
The poles connect, the wards latch into place,
A life extends me --
Love-hate; grief; faith; wonder;
Tenderness.

We can know each other. That's so poignant at times it's hard to bear. So we escape into our prisons, but the connection's always there. How else could we have poetry?

These are wonderful poems. And the ideas in this essay I will carry with me. Thanks.

"The ghost dogs in the vanishing gardens" My best and most faithful friend died last November. "as I touch a current flows...grief; faith; wonder;Tenderness."

Esther: I can see how that would be quite a temptation for a child! I'm aware of the annual New Year cleaning ritual, but I didn't know that it included replacement of the shoji paper. I do remember seeing nice temporary hole patches: flowers, leaves, etc. On a more general note, the world of paper in Japan is a wonderful thing.

Thank you for stopping by again. It's always good to hear from you.

The Jennings poem is rather poignant, as, in later life, Miss Jennings spent a great deal of her life during the day sitting on benches in parks, specifically The Parks, a large expanse of meadow and lawn belonging to the University, that separates the city centre from the North Oxford suburbs. It is to my great regret that during my time as a graduate student in the 90s, I did not make the effort to get to know her, largely because, like most of those who walked past her, I had no idea who she was. We called her the Green Lady, because she dressed entirely in sage green. She carried around with her a polythene shopping bag containing manuscripts of poems she was working on and would apparently read them to people who sat with her for a while.

Mr. Maruskin: Please accept my apologies for the delay in posting, and responding to, your comment.

You've tied my disjointed and haphazard fragments together in a way that I was unable to do. Thank you so much for doing so! I particularly like your thought about the man in the park: "Knowing he's excluded from someone else's perspective is just another part of his revelation." Your thought about poetry being evidence of the fact that "the connection's always there" is lovely. Jennings' poem is itself a perfect example of your observation, isn't it?

I'm very sorry to hear of the loss of your companion. Having been through that more than once, I know the feeling. My condolences.

As ever, thank you for visiting. Take care.

Allan: I apologize for the delay in posting, and responding to, your comment. Thank you very much for sharing your anecdote about Elizabeth Jennings. I was aware of the circumstances of her life in her later years, but your experience provides an immediacy that I hadn't felt before. As you may know, she wrote a poem about a particular park in Oxford. It is titled "Port Meadow, Oxford," and closes with these lines: "Above it is wide, wide sky./I feel uplifted, I want to learn to fly,/To be beyond/This edge of life, this tremulous brink."

Thank you for visiting. I hope you'll return.

Another poet of whom I had never heard: Ms Barton. I think that piece from her is staggering.

Hardy's "He Prefers Her Earthly" goes to the marrow.

Elizabeth Jennings is a holy poet.

Thanks again for this scrupulous site.

Mr. Hill: It's good to hear from you again.

Yes, Joan Barton's poem is wonderful, isn't it? I'm grateful to Larkin for having introduced me to her (and to several other out-of-the-way poets who I likely wouldn't have discovered on my own).

Thank you for the direction to "He Prefers Her Earthly." After receiving your comment, I found it in Moments of Vision, and noticed that it immediately follows "During Wind and Rain." Your description of the poem is perfect. You've now made me realize that it is once again time to return to Hardy!

That is a lovely characterization of Elizabeth Jennings. As I thought about your words, for some reason Christina Rossetti came to mind. I had never paired her and Jennings in my mind before. But perhaps there are some parallels, given the subject matter of much of their poetry. In any case, your description of Jennings is touching, and apt.

Thank you very much for your kind words about the blog, and for visiting again. I hope that all is well.