Here are the opening lines of a poem to which we shall return in a moment:
I live still, to love still
Things quiet and unconcerned, --
The lines were written in the twentieth century by an English poet. They are engraved on the poet's tomb, which lies in the churchyard of Holy Trinity Church, Long Melford, Suffolk. 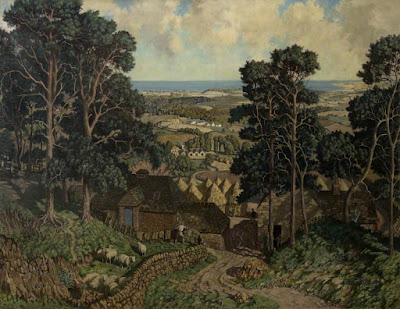 James Torrington Bell (1898-1970), "Braes of Downie" (1938)
My daily walk takes me through a wide, treeless meadow which slopes gently upward to the west.  At this time of the year, the wild grasses in the meadow are knee high, even hip high in places.  One wades through green along a narrow dirt path.  If the day is breezy, you are surrounded by swaying, rustling waves of green.  When you reach the top, the view suddenly opens up, and there they are, spread out to the horizon: Puget Sound and the Olympic Mountains.
"Against this predominance of machinery in our existence, Wordsworth's poetry, like all great art and poetry, is a continual protest.  Justify rather the end by the means, it seems to say: whatever may become of the fruit, make sure of the flowers and the leaves.
*     *     *     *     *
That the end of life is not action but contemplation -- being as distinct from doing -- a certain disposition of the mind: is, in some shape or other, the principle of all the higher morality. . . . To treat life in the spirit of art, is to make life a thing in which means and ends are identified: to encourage such treatment, the true moral significance of art and poetry.  Wordsworth, and other poets who have been like him in ancient or more recent times, are the masters, the experts, in this art of impassioned contemplation.  Their work is, not to teach lessons, or enforce rules, or even to stimulate us to noble ends; but to withdraw the thoughts for a little while from the mere machinery of life, to fix them, with appropriate emotions, on the spectacle of those great facts in man's existence which no machinery affects."
Walter Pater, "Wordsworth," in Appreciations, with an Essay on Style (Macmillan 1889), pages 61-62 (italics in original text).
Pater's essay is, I think, one of the finest things ever written about Wordsworth.  But you should take what I say with a grain of salt: as I have said here before, I am a Wordsworthian pantheist (the Wordsworthian-Coleridgean pantheism of 1797 through 1799), so what Pater has to say falls on sympathetic ears.  On the other hand, there are those who find Wordsworth insufferably dull.  That's how these things go. 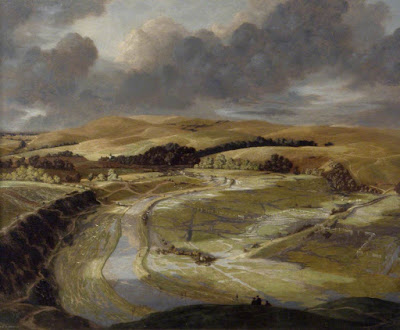 Eric Hubbard (1892-1957), "The Cuckmere Valley, East Sussex"
From within the trees and bushes around the margins of the meadow, the birdsong never ceases.  Now and then you may hear the brief, rapid, hollow knocking of a woodpecker, far off in a dark wood.  You seldom see birds out in the meadow, but, when you do, it is a lovely surprise: a small, lone wanderer unexpectedly hops out of the deep grass beside the path, a few feet in front of you, and then hurries away down the long green tunnel -- as startled as you -- alert, but not greatly alarmed.
Not for Use
A little of Summer spilled over, ran
In splashes of gold on geometry slates.
The grass unstiffened to pressure of sun.
I looked at the melting gates
Where icicles dropped a twinkling rain,
Clusters of shining in early December,
Each window a flaring, effulgent stain.
And easy now to remember
The world's for delight and each of us
Is a joy whether in or out of love.
'No one must ever be used for use,'
Was what I was thinking of.
Elizabeth Jennings, Growing Points (Carcanet 1975).
"Things quiet and unconcerned."  This falling away and paring away of things as the years go by is a welcome development. 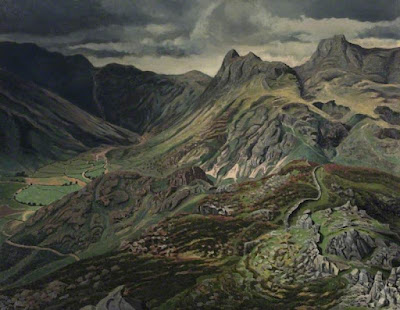 Dane Maw (1906-1989), "Langdell Fells, Westmorland"
And now, to return to our English poet.  He was a gentle man who loved cricket and pubs.  He and Thomas Hardy became good friends. He spent more days at the front than any of the other poets of the First World War.  "Yes, I still remember/The whole thing in a way;/Edge and exactitude/Depend on the day."  (Edmund Blunden, "Can You Remember?")  He knew full well the uses to which a human being can be put.  But he never ceased loving the World.
Seers
I live still, to love still
Things quiet and unconcerned, --
And many can say this.
I watch their bliss,
To these things they have ever returned.
One who has passed beyond
Sits in my room with me,
But is sitting beside a pond
On a fallen tree,
And the pictured water-countenance
Is his day's ample inheritance.
And one died young who passed
An hour or two away
From war, where windows were glassed
And kept their kind display,
There he stands rapt, -- the china, the clocks,
Gollywogs, chessmen, postcards, frocks.
Enough it was also for her
Whose life was toil on toil
If sometimes a wanderer
Where bracken fronds uncoil,
Or silverweeds in woodways shone
She might regard them one by one.
Edmund Blunden, A Hong Kong House: Poems 1951-1961 (Collins 1962).
He closes his best-known poem with this line: "Over there are faith, life, virtue in the sun." 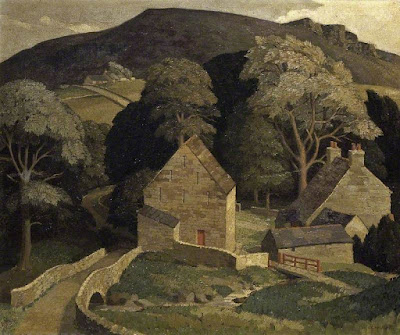 “No one must ever be used for use” brings to mind a lovely song sung by Maura O’Connell...

Esther: Thank you for sharing that. A nice connection. Both the words and the singer are new to me. I did a bit of searching, and discovered that the song was written by two Nashville songwriters. In addition to the version by Ms. O'Connell, I found a version by Patty Loveless and one of my favorites: Emmylou Harris. Lovely.

The final stanza of "Not for Use" is quite something, isn't it? What a turn it takes in four short lines after what has come before.

Thank you very much for sharing your thoughts, and the song. I hope that all is well.

Back in the ‘70s I saw Emmylou in concert a couple times at the Arlington Theater, which you might remember from your time in S. B. There were little star-like lights that twinkled on in the ceiling. The late John Prine opened for her first concert; and the late Nicolette Larsen, a delightful jumble of knee-length hair, jeans, and smiles, was a guest at the second. Elite Hotel had just been released, and when Emmylou came out wearing the embroidered white top from the album cover, the crowd was particularly pleased.

Esther: I apologize for the lengthy delay in responding to your comment: I have been been wearing my lawyer's hat quite a bit over the past few months, and thus have not been keeping up with First Known When Lost as I should. But I was indeed delighted to receive your follow-up thoughts: they sent me on an extended journey to the time and place you write of.

Yes, it appears that you and I were sharing that time and place, doesn't it? Who knows, we may have passed each other on State Street, or along some beach. And now here we are. Wonderful. The Arlington Theater certainly brings back memories, although I never saw Emmylou there. A lot of movies, though.

Since you opened the floodgates of memory, I am bound to tell you about a treasured moment. I saw her perform several times when she was starting her solo career after the death of Gram Parsons. For instance, I remember seeing her in a club (in Hollywood?) with the original Hot Band (with, as you know, James Burton and Rodney Crowell). (Little did I know what I was seeing at the time. Well, I knew, but I should have been playing closer attention!)

But here is my treasured moment. In the Seventies (again, when she was starting her solo career), a friend and I attended a day-long festival known as (if I recall correctly) "the Malibu Mountain Bluegrass Festival." A sunny (of course) Southern California day. A crowd spread across a sloping hillside. Emmylou performed at the festival. She may have been the closing act, but I can't recall. The festival ended as the sun was setting into the Pacific. My friend and I walked back to our car across a wide field, in the twilight. Suddenly, we noticed that Emmylou was walking across the field as well, a few yards away from us. (With her band? I can't recall.) We didn't say anything to her, but just kept walking, as did she. That's all. A lifetime ago.

I've been noticing that it has been quite hot in Tokyo this summer, even by Tokyo standards. No doubt the semi are crying away. I hope that all is well. As ever, thank you very much for visiting.