We have previously heard from Montaigne, Samuel Johnson, and Cavafy on the "wherever you go, there you are" problem.  A. S.  J. Tessimond (1902-1962) (who I intend to write about as a neglected poet) has spoken on this subject as well.  That Tessimond at times worked in the advertising business (and wrote at least three poems on the business -- "Advertising," "The Ad-Man," and "Defence of the Ad-Man") may (or may not) be something to bear in mind as you think about the poem.

You are in love with a country
Where people laugh in the sun
And the people are warm as the sunshine and live and move easily
And women with honey-coloured skins and men with no frowns on
their faces
Sit on white terraces drinking red wine
While the sea spreads peacock feathers on cinnamon sands
And palms weave sunlight into sheaves of gold
And at night the shadows are indigo velvet
And there is dancing to soft, soft, soft guitars
Played by copper fingers under a froth of stars.

Perhaps your country is where you think you will find it.
Or perhaps it has not yet come or perhaps it has gone.
Perhaps it is east of the sun and west of the moon.
Perhaps it is a country called the Hesperides
And Avalon and Atlantis and Eldorado:
A country which Gaugin looked for in Tahiti and Lawrence in Mexico,
And whether they found it only they can say, and they not now.
Perhaps you will find it where you alone can see it,
But if you see it, though no one else can, it will be there,
It will be yours. 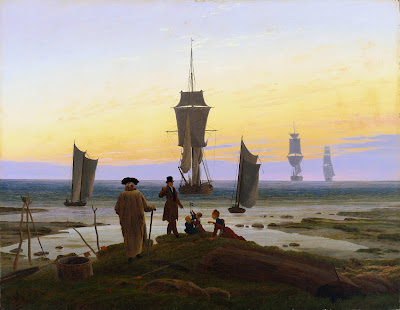 Oddly enough, Brian Patten is presenting a programme on Tessimond this Sunday (4.30pm) on our BBC Radio 4 - perhaps you can get it online? It's the first of a series of 4 called Lost Voices, so it sounds like your kind of thing.

Nige: Thank you once more for visiting the blog and for leaving a comment. And thank you indeed for the tip on the BBC programme on Tessimond - I will definitely listen to it, as well as to the other "Lost Voices" programmes. I am pleased to have been proved wrong: it seems that Tessimond is not in fact a "neglected poet"!

It's good to see Tessimond being reappraised. The BBC programme was, I felt, rather superficial, focussing too much on his sexlife and too little on his other motivations. However, devoting a whole programme to him, along with the recent reissue of his Collected Poems, are encouraging signs.

misterf: Thank you for visiting, and for your comment. Yes, it is heartening that he is coming to people's attention. I agree with you that the reissuance of his Collected Poems is especially welcome. (I have been trying to track down an old copy for quite some time!)

I am delighted to find that there are many of us who share an admiration for his work. Thank you again.