I admire Ludwig Wittgenstein.  I do not admire the pack of academic philosophers, theorists, and other hyenas who have systematically misunderstood and misrepresented what he actually said.  Wittgenstein noticed the initial stages of this phenomenon, and he was angered and appalled.

Given the intellectual temper of our times, things have only gotten worse.  However -- have no fear! -- I do not intend to wade into that particular morass.  For a succinct discussion of the subject, I recommend Bryan Magee's Confessions of a Philosopher (1998), which contains a chapter recounting Magee's dismay and shock at the manner in which supposedly intelligent people ignored what was staring them in the face.

All that I wish to do is to suggest that we read Wittgenstein -- and listen to what he says.  Ignore the intermediaries.  And, as background, bear in mind stray facts like these: Tolstoy and Samuel Johnson (particularly the Prayers and Meditations) were important to him; he loved to watch American movies; he avidly read American detective stories.

This passage is from a draft of Wittgenstein's foreword to Philosophical Remarks (1930):

"This book is written for those who are in sympathy with the spirit in which it is written.  This is not, I believe, the spirit of the main current of European and American civilization.  The spirit of this civilization makes itself manifest in the industry, architecture and music of our time, in its fascism and socialism, and it is alien and uncongenial to the author.  This is not a value judgment.  It is not, it is true, as though he accepted what nowadays passes for architecture as architecture, or did not approach what is called modern music with the greatest suspicion (though without understanding its language), but still, the disappearance of the arts does not justify judging disparagingly the human beings who make up this civilization.
. . . . .
I realize then that the disappearance of a culture does not signify the disappearance of human value, but simply of certain means of expressing this value, yet the fact remains that I have no sympathy for the current of European civilization and do not understand its goals, if it has any.  So I am really writing for friends who are scattered throughout the corners of the globe.

It is all one to me whether or not the typical western scientist understands or appreciates my work, since he will not in any case understand the spirit in which I write.  Our civilization is characterized by the word 'progress'.  Progress is its form rather than making progress being one of its features.  Typically it constructs.  It is occupied with building an ever more complicated structure.  And even clarity is sought only as a means to this end, not as an end in itself.  For me on the contrary clarity, perspicuity are valuable in themselves.

I am not interested in constructing a building, so much as having a perspicuous view of the foundations of possible buildings.

So, I am not aiming at the same target as the scientists and my way of thinking is different from theirs."


Again, my hope is that we read Wittgenstein, and forget about his interpreters.  And, always remember: clarity and perspicuity are very important words in his thought and writing. 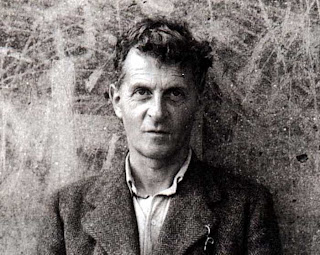 Posted by Stephen Pentz at 4:32 AM