"The Only Brother I Ever Had": Robert Frost and Edward Thomas

It is generally recognized that but for his friendship with Robert Frost (they met in October of 1913, when Frost was living in England) -- and his decision in 1914 to enlist -- Edward Thomas would not have begun writing poetry.  That story has been told many times elsewhere (see, for example, Into My Own: The English Years of Robert Frost (1988) by John Walsh), so I will not repeat it here.

What I find remarkable is the strength of the connection between Frost and Thomas.  In a letter to Edward Garnett (who was also a friend of Thomas) after Thomas's death, Frost wrote:

"Edward Thomas was the only brother I ever had.  I fail to see how we can have been so much to each other, he an Englishman and I an American and our first meeting put off till we were both in middle life.  I hadn't a plan for the future that didn't include him."

Frost, Selected Letters (1964), quoted in Jay Parini, Robert Frost: A Life (1999), page 179.  Regarding the final sentence above, it should be noted that, prior to his enlistment, Thomas was seriously considering emigrating to America with his family in order to live near Frost and his family in New Hampshire.  In another letter, Frost wrote:  "We were together to the exclusion of every other person and interest all through 1914 -- 1914 was our year.  I never had, never shall have another year of such friendship."  Walsh, Into My Own, pages 180-181.

Even more touching is Frost's letter to Thomas's wife Helen after Frost learned of Thomas's death (Frost had since moved back to America):

"I knew from the moment when I first met him at his unhappiest that he would some day clear his mind and save his life. . . . I have had four wonderful years with him.  I know he has done this all for you:  he is all yours.  But you must let me cry my cry for him as if he were almost all mine too."

I slumbered with your poems on my breast,
Spread open as I dropped them half-read through
Like dove wings on a figure on a tomb
To see if in a dream they brought of you,

I might not have the chance I missed in life
Through some delay, and call you to your face
First soldier, and then poet, and then both,
Who died a soldier-poet of your race.

I meant, you meant, that nothing should remain
Unsaid between us, brother, and this remained --
And one thing more that was not then to say:
The Victory for what it lost and gained.

You went to meet the shell's embrace of fire
On Vimy Ridge; and when you fell that day
The war seemed over more for you than me,
But now for me than you -- the other way.

How over, though, for even me who knew
The foe thrust back unsafe beyond the Rhine,
If I was not to speak of it to you
And see you pleased once more with words of mine? 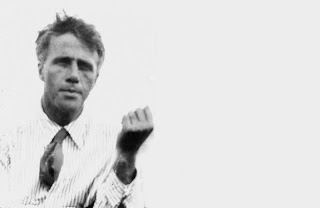 Posted by Stephen Pentz at 6:07 AM