How To Live, Part Eight: "The Only True Teaching Subsists In Watching Things Moving Or Just Colour Without Comment From The Scholar"

After being successfully treated for lung cancer in 1954 and 1955, Patrick Kavanagh entered a sort of euphoric era in his poetry.  We saw this previously in his poem "The Hospital," in which he asserts that "nothing whatever is by love debarred" and then goes on to enumerate the delights of the Rialto Hospital in Dublin.  During this post-cancer period, he wrote what have become known as the "Canal Bank poems," because they were prompted by his walks along the Grand Canal in Dublin.  The following poem was written during this time.  It is a good piece of advice on How to Live.

The important thing is not
To imagine one ought
Have something to say,
A raison d'etre, a plot for the play.
The only true teaching
Subsists in watching
Things moving or just colour
Without comment from the scholar.
To look on is enough
In the business of love.
Casually remark
On a deer running in a park;
Mention water again
Always virginal,
Always original,
It washes out Original Sin.
Name for the future
The everydays of nature
And without being analytic
Create a great epic.
Girls in red blouses,
Steps up to houses,
Sunlight round gables,
Gossip's young fables,
The life of a street.

The lines "Name for the future/The everydays of nature" are reminiscent of a line from "The Hospital":  "Naming these things is the love-act and its pledge."  And, as Kavanagh speaks in this poem of his "inexhaustible theme," he speaks in "The Hospital" of "the inexhaustible adventure of a gravelled yard." 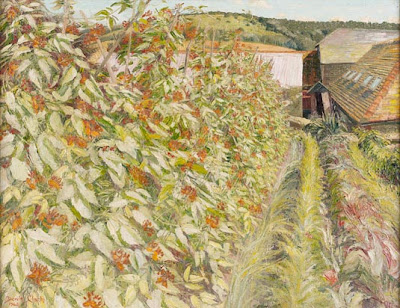 Labels: How To Live, Patrick Kavanagh

Wonderful! Especially resonated with me today - liked this so much. Thank you for your posts.
The painting is lovely and so well chosen.
Mary

Stephen, You've introduced me to a new poet in Patrick K. This really suits my mood today!
And then I scrolled down to the painting.
More inspirtaion and oh how I wish I could get my runner beans to look like that.
j

Mary: thank you very much for visiting and commenting, and for your kind words. Please stop by again.

Julie: I'm delighted that you like the poem by Kavanagh, and that I was able to introduce you to his work. I only started reading his poetry in recent years, and I have enjoyed his work. As always, thank you for stopping by, and for your thoughts.

Oh yes, indeed. An old friend (both in years and duration of friendship) and I have been talking a great deal lately about whether or not we've met the "expectations" of our lives. I'm sending her this post.

Mary F. C. Pratt: thank you for visiting and commenting again. I'm happy that "Is" proved to be timely!

I wonder if your transcription of 'Is' is correct ? Line 3 is as given in the latest collected ed (= Allen, Lane 2004, then pbk as Penguin Modern Classics Poetry. Ed. by A.Quinn) - which I have - but grammar & scansion suggest it should be:
To have something to say [not Have something ...].
I don't have a copy of the Kitty Stobling collection to cross-check, nor, alas, are there texts for Patrick Kavanagh in LION (the full-text online database). However I have found another posting on the web by a PK enthusiast who has it with that 'To' at the beginning of Line 3.
See
http://www.srichinmoyinspiration.com/comments/10235

Mr. Noel-Tod: thank you very much for visiting and commenting again.

The construction of Line 3 has always seemed a bit strange to me as well, but I believe that it is correct as I have posted it. As you say, it appears this way in Quinn's edition of the Collected Poems. I also checked my copy of The Faber Book of Twentieth Century Verse (edited by Heath-Stubbs and Wright), which contains the poem, and the reading is the same. (Not that Faber is necessarily infallible.) I also did a Google search and found two academic articles with this reading. Like you, I do not have a copy of Kitty Stobling.

I confess that -- like the blog to which you provided a link -- I feel tempted to add a "to" at times. But no "to" appears to be correct.

As it happens, one of my sons is a lecturer in literature at the local university (UEA) and he said he would look up Line 3, as printed in the 1960 Kitty Stobling collection, when he was next in the stacks. So maybe we'll have a resolution ! A propos the infallibility of Faber, I had to study Wallace Stevens' poem 'Peter Quince at the Clavier' when I was at university. I used the Faber 1965 pbk ed. of Selected Poems (orig. pub. 1953). In it the opening of section II reads:

In the green water, clearn and warm,
Susanna lay.

With the enthusiasm of the youthful undergraduate, I tried to convince my tutor that 'clearn' was a brilliant coinage by Wallace Stevens to suggest both clear and clean. He was sceptical, and when I went to check it in the university library I found it was just a misprint limited to that edition !

Mr. Noel-Tod: I look forward to the result of your son's detective work. Thanks to both of you. And thank you as well for the anecdote about Faber and Stevens. (Although I can understand why you might have suspected Stevens of employing a neologism!)

Thanks for the poem.

Mr McMahon: thank you very much for stopping by again, and for providing the clarification/confirmation on "one ought have." I would never have known of the possible Gaelic origin of the usage.