"The Unremitting Voice Of Nightly Streams"

Carrying further the observations of Philip Larkin and Patrick Kavanagh on the beneficent qualities of water, let us consider a poem written by William Wordsworth late in his life.  The conventional wisdom is that Wordsworth's best years as a poet came to an end around the time that he turned 40 (in 1810).  Even Matthew Arnold, who greatly admired Wordsworth's poetry, accedes to this view:  "Wordsworth composed verses during a space of some sixty years; and it is no exaggeration to say that within one single decade of those years, between 1798 and 1808, almost all his really first-rate work was produced."  (Essays in Criticism, Second Series, "Wordsworth.")

However, there are still gems to be found in Wordsworth's later years.  The following poem was written in 1846, when Wordsworth was 76.  It is untitled.

The unremitting voice of nightly streams
That wastes so oft, we think, its tuneful powers,
If neither soothing to the worm that gleams
Through dewy grass, nor small birds hushed in bowers,
Nor unto silent leaves and drowsy flowers, --
That voice of unpretending harmony
(For who what is shall measure by what seems
To be, or not to be,
Or tax high Heaven with prodigality?)
Wants not a healing influence that can creep
Into the human breast, and mix with sleep
To regulate the motion of our dreams
For kindly issues -- as through every clime
Was felt near murmuring brooks in earliest time;
As, at this day, the rudest swains who dwell
Where torrents roar, or hear the tinkling knell
Of water-breaks, with grateful heart could tell.

The thought expressed in the poem is a lovely one:  the sound of moving water enters our dreams as we sleep and takes us to peaceful places.  However, I sometimes feel that Wordsworth should have left out the parenthetical aside that appears in Lines 7 through 9.  I find the syntax and the meaning of the lines a bit strange and out-of-place.  Moreover, cutting them out would reduce the poem to 14 lines, and potentially turn it into a fine sonnet. 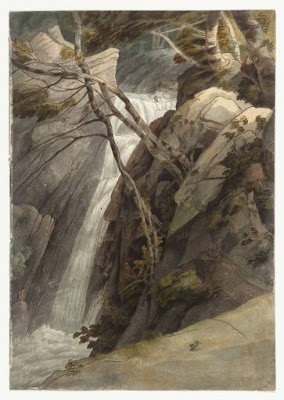