"Where Any-Angled Light Would Congregate Endlessly"

Patrick Kavanagh's "Is," which appeared in my previous post, contains these lines:  "Mention water again/Always virginal,/Always original,/It washes out Original Sin."  The lines bring to mind a poem by Philip Larkin, a poem that might seem a bit out of character for Larkin.  But every so often he does go off on one of these lyrical excursions.

If I were called in
To construct a religion
I should make use of water.

Going to church
Would entail a fording
To dry, different clothes;

My liturgy would employ
Images of sousing,
A furious devout drench,

And I should raise in the east
A glass of water
Where any-angled light
Would congregate endlessly.

Just when you think that Larkin is all dreariness and astringency, out comes something like "Water."  As a matter of the simple beauty of words, it is hard to beat the assonance and consonance of "Where any-angled light/Would congregate endlessly."  "Endlessly" calls up the close of "High Windows" (written nearly thirteen years after "Water"):  "Rather than words comes the thought of high windows:/The sun-comprehending glass,/And beyond it, the deep blue air, that shows/Nothing, and is nowhere, and is endless." 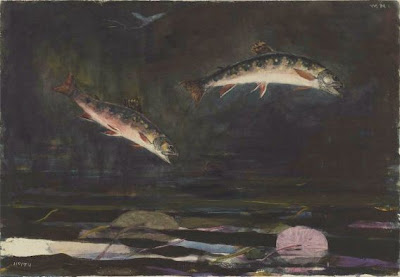