As age works away at my memory -- names, places, and dates are the usual victims -- I find that, for some reason, I have not yet lost the poems that I have read over the years.  I am certainly not claiming that they are all there, line by line, waiting to be brought up at will.  Far from it.  Rather, titles or images or lines unexpectedly reappear by association with something else.

Today, on my afternoon walk, I saw a pair of large pink and creamy-white dahlias bending towards the ground, not long for this autumn world.  And then I remembered the title of the following poem.  I have not read the poem for at least 10 years, probably longer.  But here it is again, brought back by the sight of two beautiful, unseasonable dahlias.

It is easy enough to love flowers but these
had never appealed to me before, so
out of proportion above my garden's
other coloured heads and steady stems.

This spring though, in warm soil, I set
an unnamed tuber, offered cheap, and,
when August came and still no sign,
assumed the slugs had eaten it.

Suddenly it showed;
began to grow, became a small tree.
It was a race between the dingy bud
and the elements.  It has beaten
the frost, rears now three feet above
the muddled autumn bed, barbaric petals
pink quilled with tangerine, turning
its great innocent face towards me
triumphantly through the damp afternoon.

I could not deny it love if I tried. 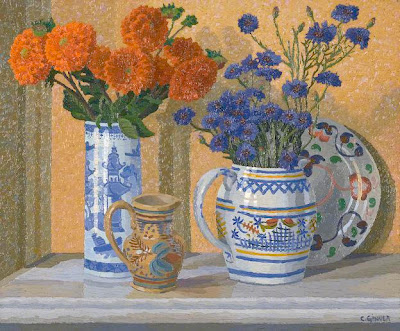 Lest one think that "love" is too strong a word for one's feelings towards a giant decorative dahlia, I shall refer you back to Patrick Kavanagh's "The Hospital":  "Nothing whatever is by love debarred."  And to Stevie Smith's "Oh Grateful Colours, Bright Looks!":  "Seize colours quick, heap them up while you can." 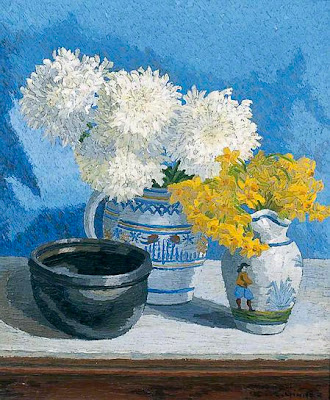 I like the simplicity of this poem and the beautiful Ginners, with the wonderfully rendered French faience pottery.
julie

S R Plant: I agree with you about her choice of 'barbaric.' I think that some varieties of dahlias do look other-worldly and/or fearsome.

As always, thank you for dropping by, and, of course, for your thoughts.

Julie: thank you for visiting and commenting again. Yes, the pottery is well done, isn't it? I particularly like the vase with the Chinese design in the first painting. I'm sure that you noticed that one of the vases appears in both paintings.