"The Hundred Last Leaves Stream Upon The Willow"

In November of 1916, Edward Thomas sent a draft of "The Long Small Room" to Eleanor Farjeon.  After receiving her comments on the poem, Thomas wrote back:

"I am worried about the impression the willow made on you.  As a matter of fact I started with that last line as what I was working to.  I am only fearing it has a sort of Japanesy suddenness of ending.  But it is true, whether or not it is a legitimate switch to make."

The long small room that showed willows in the west
Narrowed up to the end the fireplace filled,
Although not wide.  I liked it.  No one guessed
What need or accident made them so build.

Only the moon, the mouse and the sparrow peeped
In from the ivy round the casement thick.
Of all they saw and heard there they shall keep
The tale for the old ivy and older brick.

When I look back I am like moon, sparrow and mouse
That witnessed what they could never understand
Or alter or prevent in the dark house.
One thing remains the same -- this my right hand

Crawling crab-like over the clean white page,
Resting awhile each morning on the pillow,
Then once more starting to crawl on towards age.
The hundred last leaves stream upon the willow. 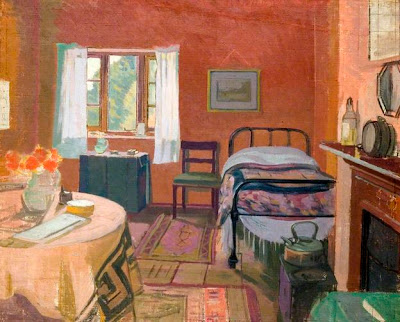 The final line that Thomas worried about is, of course, beautiful.  It was certainly well worth "working to" once Thomas had found it.  After all, it passed his ultimate test, the test that causes us to remember his poetry:  "it is true."  And the line does, to use his words, give the poem something of a "Japanesy suddenness of ending."  (I would also suggest that the ending is reminiscent of a number of Chinese poems from the T'ang Dynasty.)  It is not likely that Thomas had any translations of Ryokan's poetry available to him, but the following poems perhaps provide a hint of what he was speaking of.

My gate has been unbolted for many days,
Yet no sign of anyone entering the peaceful garden.
The rainy season is over, green moss is all around;
Slowly the oak leaves float to earth.

Returning to my hermitage after filling my rice bowl,
Now only the gentle glow of twilight.
Surrounded by mountain peaks and thinly scattered leaves;
In the forest a winter crow flies. 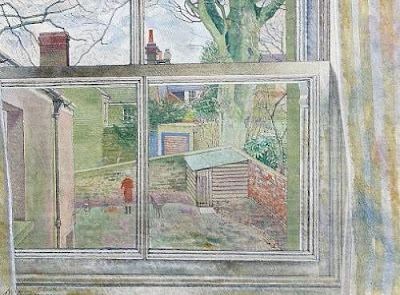 I don't know--something disturbing here. Thomas' poem seems to hint at a dark history for the cottage, especially the third stanza.

The crab imagery in the fourth--a bit of Eliot there?

I haven't had an opportunity to look at your blog of late. It is very nice to be back among its pages.

Fred: Thomas's daughter said that the poem was about "a stone out-building" located in the garden of a friend's house in which Thomas liked to work when he stayed with the friend. I think that the reference to "the dark house" is more reflective of Thomas's melancholy moods than of anything related to the building. For a poem which does reflect gloom about a specific house, please take a look at his "The New House."

I'm not so sure about any reference to Eliot in the crab. Although "Prufrock" was published in London in 1915, and although Thomas kept abreast of new poetry, I think that any crab would have come out of Thomas's own experience.

As always, thank you for your thoughts, Fred, and for stopping by.

zmkc: thank you for visiting, and for the kind words. Your recent blog entries suggest that you have been on the road again, so I appreciate your taking the time to drop by.

Probably so. I know next to nothing about Thomas.

It was the juxtaposition of crab and age passing that triggered the thought about Eliot.

Thanks, Fred. I should, though, issue a disclaimer on the crab: my opinion about whether Thomas had Eliot in mind is just that -- an opinion.