Today, while on my afternoon walk, I was wishing for a long canopy of leaves as the rain moved ashore from the west.  But I had already moved out of the woods into the open fields.  In any case, waiting out the rain beneath the trees, however pleasant, is not really an option in this part of the world: once the rain starts, it may go on for hours.  Or days.  Or weeks, for that matter.

Out in the deep wood, silence and darkness fall,
down through the wet leaves comes the October mist;
no sound, but only a blackbird scolding,
making the mist and the darkness listen.

Peter Levi, Collected Poems 1955-1975 (1976).  A note:  the "alcaic stanza" was a Greek and, later, Latin verse form consisting of four lines and having complicated syllabic and metrical requirements (which I no longer remember). 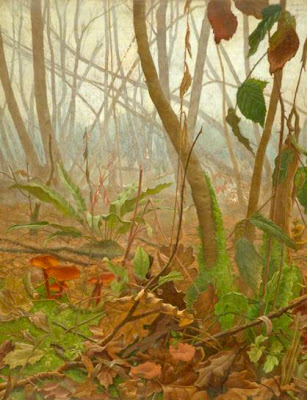 Air darkens, air cools
And the first rain is heard in the great elms
A drop for each leaf, before it reaches the ground
I am still alive.

Lying in a Hammock at William Duffy's
Farm in Pine Island, Minnesota

Over my head, I see the bronze butterfly,
Asleep on the black trunk,
Blowing like a leaf in green shadow.
Down the ravine behind the empty house,
The cowbells follow one another
Into the distances of the afternoon.
To my right,
In a field of sunlight between two pines,
The droppings of last year's horses
Blaze up into golden stones.
I lean back, as the evening darkens and comes on.
A chicken hawk floats over, looking for home.
I have wasted my life.

James Wright, The Branch Will Not Break (1963).  An aside:  being a native Minnesotan, I have long had a sentimental attraction to this poem, even though I do not recall ever having been in Pine Island (which I am certain is lovely). 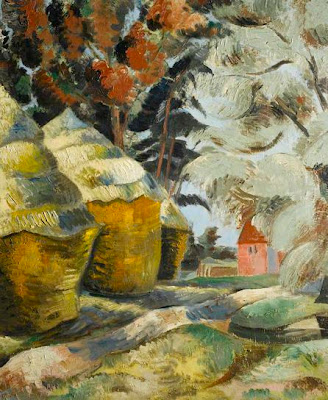 In my 1962 Penguin Contemporary American Poetry, an anthology by Donald Hall, Line 10 appears as 'Blaze into golden stones.' I gather James Wright often revised his work, but I can't feel the addition of 'up' is an improvement here.

Alcaic really speaks to the solitude of the season to me. The Hodgkin painting is so wonderful- I love it! It feels perfect for the poem- what a joy. Thanks for sharing these treasures.

Anonymous: thank you very much for visiting and commenting. I took the text from Above the River: The Complete Poems (1990), which has "Blaze up into golden stones." I also checked The Collected Poems (1971), which was published while Wright was still alive: it also has the "up."

I believe that the poem was written in 1961 or so. It was not published in book form until 1963. Thus, I suspect that Hall's anthology used a version that appeared when the poem was initially published in a periodical. Or else the anthology text is simply incorrect.

I can understand how the "up" might sound out-of-place after being accustomed to "blaze into."

Again, thank you for stopping by.

Mary: thank you very much for visiting, and for your kind thoughts. I'm pleased that you found your way here. Thanks again.