Nearly a year ago, I posted Robert Frost's "Reluctance," which appeared in A Boy's Will in 1913.  The following poem was published ten years later in Frost's New Hampshire.  I think of the two poems as variations on a theme that surfaces in the final stanza of "Reluctance":

Ah, when to the heart of man
Was it ever less than a treason
To go with the drift of things,
To yield with a grace to reason,
And bow and accept the end
Of a love or a season? 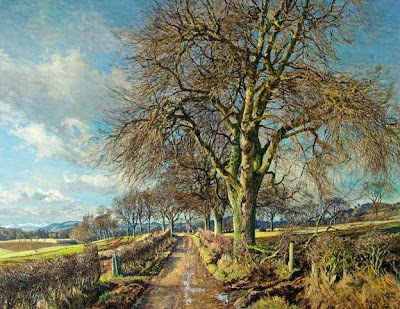 All crying, 'We will go with you, O Wind!'
The foliage follow him, leaf and stem;
But a sleep oppresses them as they go,
And they end by bidding him stay with them.

Since ever they flung abroad in spring
The leaves had promised themselves this flight,
Who now would fain seek sheltering wall,
Or thicket, or hollow place for the night.

And now they answer his summoning blast
With an ever vaguer and vaguer stir,
Or at utmost a little reluctant whirl
That drops them no further than where they were.

I only hope that when I am free
As they are free to go in quest
Of the knowledge beyond the bounds of life
It may not seem better to me to rest.

The territory of autumn is covered quite well by the words "misgiving" and "reluctance."  But I lean towards the sort of embrace (or is it resignation?) suggested by Wallace Stevens's "The Region November."  However, it takes a simple, direct statement to get to the real heart of the matter. 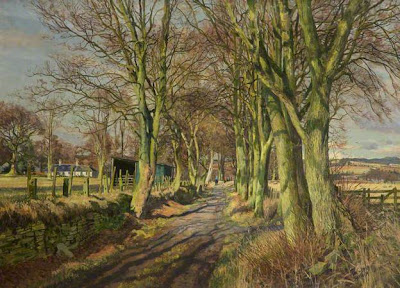 James McIntosh Patrick, "Byroad near Kingoodie" (1962)
Posted by Stephen Pentz at 12:10 AM

How lovely - absolutely wonderful - are those paintings, first and foremost. They encapsulate the light and atmosphere of a March day absolutely . . .

Frost's first piece gave me more understanding of the mind of a man - or boy - than 30 years together with my husband! What an admission to have to make . . .

The second poem - how I can identify with his sentiments - having often written down little snippets about the journeys of autumn leaves, be it airborne, skipping along country lanes or forming processions on rivers over the years. Yes, you would almost imagine they had been planning their freedom all year, only - some of them - to be bitterly disappointed with their travels.

Bovey Belle: thank you for visiting again, and for your thoughts.

As to the paintings, I have discovered that James McIntosh Patrick is a master at depicting empty trees. I'm pleased that you like the paintings.

As to the poems, for all of his fooling around, Frost has a knack for getting to the heart of things, doesn't he?