How To Live, Part Nineteen: The New Year

I am not one for making New Year's resolutions.  But I am willing to listen to advice.  Perhaps the best-known piece of advice on How to Live was given by Horace:  carpe diem, quam minimum credula postero.  In The Oxford Dictionary of Latin Words and Phrases (1998) the phrase is translated as follows:  "seize the day, trusting as little as possible to the morrow."  Yes, of course:  carpe diem.  We've all heard it before.  Like most well-meaning advice, easier said than done.

The phrase appears in Ode 11 of Book One of Horace's Odes.  As one might expect, the poem has been translated into English numerous times, with varying degrees of fidelity to the original.  The following version is by Derek Mahon.

Don't waste your time, Leuconoe, living in fear and hope
of the imprevisible future; forget the horoscope.
Accept whatever happens.  Whether the gods allow
us fifty winters more or drop us at this one now
which flings the high Tyrrhenian waves on the stone piers,
decant your wine.  The days are more fun than the years
which pass us by while we discuss them.  Act with zest
one day at a time, and never mind the rest.

Louis MacNeice also tried his hand at it:

Do not, Leuconoe, seek to inquire what is forbidden, what
End the gods have assigned to you or to me; nor do you meddle with
Astrological numbers.  What shall arise count to your balance if
God marks down to you more winters -- or perhaps this very one is the
Last which now on the rocks wears out the fierce Mediterranean
Sea; but be wise and have wine, wine on the board, prune to a minimum
Long-drawn hopes.  While we chat, envious time threatens to give us the
Slip; so gather the day, never an inch trusting futurity. 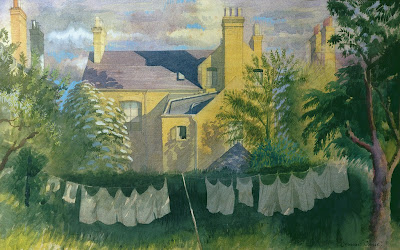 I have a soft spot for the following version by Sir Thomas Hawkins (from 1625):

Strive not, Leuconoe, to know what end
The gods above to me or thee will send;
Nor with astrologers consult at all,
That thou mayst better know what can befall;
Whether thou liv'st more winters, or thy last
Be this, which Tyrrhen waves 'gainst rocks do cast.
Be wise!  drink free, and in so short a space
Do not protracted hopes of life embrace,
Whilst we are talking, envious time doth slide:
This day's thine own; the next may be denied.

Horace, The Odes, Epodes, Satires, and Epistles, Translated by the Most Eminent English Scholars and Poets (1889).

The Elizabethans, though oftentimes flowery, were pretty good at getting to the heart of the matter in a pithy, lovely fashion when they wanted to.  I am put in mind of, for instance, Robert Devereux's "Happy were he could finish forth his fate/In some unhaunted desert," which I have posted here previously.

There was something about the intrigue and the danger of the time which, I think, tended to concentrate the mind (to borrow from Samuel Johnson in another context).  I am reminded of, say, Walter Raleigh and Henry Howard, Earl of Surrey, writing poetry in their dungeons as they awaited their beheadings.  (A fate shared by Devereux as well.) 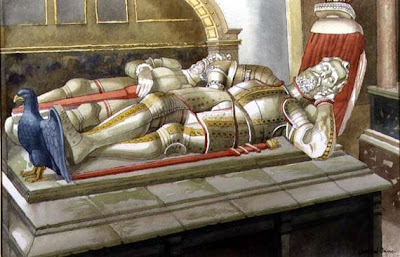 Osmund Caine, "The Hoby Effigies, Bisham Church"
Posted by Stephen Pentz at 12:10 AM

If only we had 'philosophy' enough and the resolution to 'seize the day' would we become contented at last? I have often thought so, but the theory never quite works out. The carpe diem humour is merely fleeting. Neither the consciousness of slowing down physically and mentally, nor a lifetime's experience seem to make much difference. I suppose that when you're inclined to live in the past, not even the wisdom of Horace can jerk you out of it for long.

My mood at the minute is summed up in Herrick's lines:
That age is best which is the first,
When youth and blood are warmer;
But being spent, the worse, and worst
Times still succeed the former.

Keep the poems and pictures coming; and a Happy New Year, Stephen.

S.P.
Thank you for gathering these together. I especially rang with Mahon's "decant your wine." We collect wine, exotic wood for projects, fine writing paper, gorgeous skeins of yarn, etc. - and often fail to "drink."

It has been a joy exploring your recently-stumbled-upon blog - excellent work.

Cheers on the New Year!
B.R.

Further to previous remarks about JL Carr, if you post pictures of English churches I'll likely comment on them! Hence my eye was caught by the gentleman in the Osmund Caine picture. This kind of jaunty-but-bored pose reminded me of a gem to be found in the village of Swinbrook, Oxfordshire. Just by the east window in a pokey little chancel are two monuments of three effigies apiece, except that they're effectively stacked one on top of the other.

Due to the lack of space it's very difficult to take a good picture of the whole composition of six, but the images on this page should give you a sense of what these eye-poppingly eccentric pieces are like. To quote Simon Jenkins in England's Thousand Best Churches, "The six have been compared to merchandise in a shop, passengers travelling steerage on a steamer, or a congregation of the dead, awakened to watch something important on television."

Swinbrook was also home to the Mitford family and indeed four of the sisters -- including Nancy and Unity -- are buried in the churchyard.

No words of wisdom or advice for the coming Year.

Just a wish that the coming Year be better than 2012.

But carpe diem, although fleeting (as you say), is worth a try. The Chinese and Japanese poets that I often quote here perhaps maintain a balance between Herrick and Horace: they focus on the here-and-now, but, for them, mortality is also ever-present in the current moment. A delicate balance, I admit.

In any event, Happy New Year! I always appreciate hearing from you and I look forward to your visits in the coming year.

B.R.: thank you very much for the kind words. I'm pleased that you landed here, and I hope to hear from you again.

And thank you as well for the heads-up on "imprevisable" versus "imprevisible." In Mahon's Selected Poems (1999), which I quoted from, it appears as "-able." However, in his 1999 Collected Poems it appears as "-ible," which is also what the OED has. Thus, I have corrected the text in the post. I appreciate your pointing that out.

Thanks again for your visit.

Anonymous: thank you very much for those photographs! Your description of the poses -- "jaunty-but-bored" -- is perfect. And I like "awakened to watch something important on television" as well.

It has been years since I have been to England. But I remember enjoying the engraved memorial inscriptions in the small churches.

Thanks for stopping by again. I always like to learn more about English churches.

And Happy New Year to you as well!

Fred: thanks for stopping by, and I appreciate your sentiments. As far as things getting better, I'm not so sure. Which means that it will be a good time to read more Lao-tzu, Basho, Han Shan, and Thomas Hardy in order to keep things in perspective.

Best wishes to you in the new year.

I'm very late to this party, but I want to thank you for posting this. I discovered your blog several months ago and have been dipping into its riches as I can. Lately I've been reading a bit about Horace, so I was happy to find that you had posted about him and shared some of his work. This post in particular really resonated for me. Thank you so much! Your blog is a treasure.

Mary: Thank you very much for your kind words about the blog. I'm pleased that you found your way here.

That is a wonderful poem by Horace, isn't it? I always like to compare various translations of poems in order to get a better feel for what the poet is getting at. Mahon and MacNeice are two of my favorite poets, and I've long been fond of their versions of the poem.