One of my walks takes me along the shore of Puget Sound, past the docks of a marina -- "yachts tinkling and dancing in the bay/like race-horses." (Derek Mahon, "Kinsale.")  At one point, there is a row of a dozen or so maples beside the path.  I noticed this week that, although it is high August, the maples are already in the midst of autumn, their leaves a bright combination of reds and greens, redder in the direction of the rising sun, it seems.

As I walked on, five Canadian geese suddenly flew overhead from behind me, honking, going about their business.  The very sound of autumn. 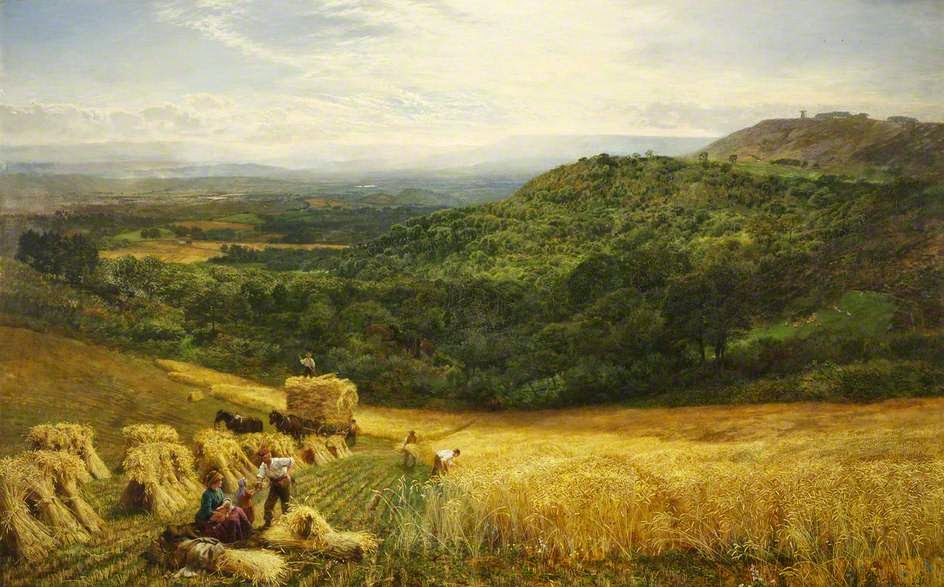 As I have noted before, Howard Nemerov is a wonderful poet of autumn -- and of late summer, and the arc into autumn, as well.

Day after day, day after still day,
The summer has begun to pass away.
Starlings at twilight fly clustered and call,
And branches bend, and leaves begin to fall.
The meadow and the orchard grass are mown,
And the meadowlark's house is cut down.

The little lantern bugs have doused their fires,
The swallows sit in rows along the wires.
Berry and grape appear among the flowers
Tangled against the wall in secret bowers,
And cricket now begins to hum the hours
Remaining to the passion's slow procession
Down from the high place and the golden session
Wherein the sun was sacrificed for us.
A failing light, no longer numinous,
Now frames the long and solemn afternoons
Where butterflies regret their closed cocoons.
We reach the place unripe, and made to know
As with a sudden knowledge that we go
Away forever, all hope of return
Cut off, hearing the crackle of the burn-
ing blade behind us, and the terminal sound
Of apples dropping on the dry ground.

This is a lovely poem, but I would respectfully disagree with these lines:  "A failing light, no longer numinous,/Now frames the long and solemn afternoons."  My friendly objection is to this: "no longer numinous."  The OED defines "numinous" as follows:  "Giving rise to a sense of the spiritually transcendent; (esp. of things in art or the natural world) evoking a heightened sense of the mystical or sublime; awe-inspiring."  In my humble opinion, the slanting yellow light of late summer and early autumn is as numinous (and evocative) as light, and the World, get. 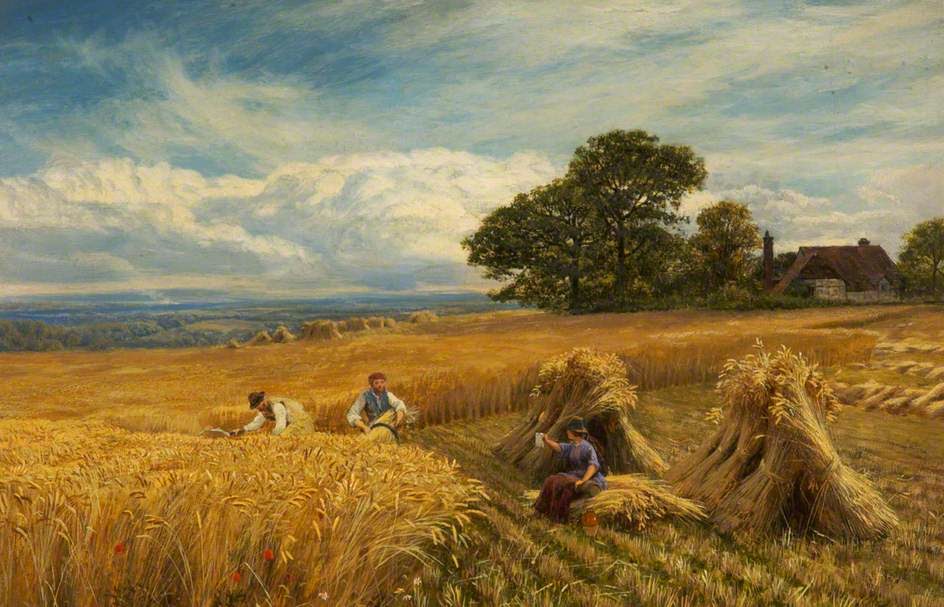 Here, Nemerov captures the essence of this time of year in four lines, providing further confirmation that less is often more.

The emotions evoked by the first falling leaf of incipient autumn transcend time and place.  This was written in Japan nearly three centuries before Nemerov's poem:

The leaf of the paulownia,
With not a breath of wind,
Falls. 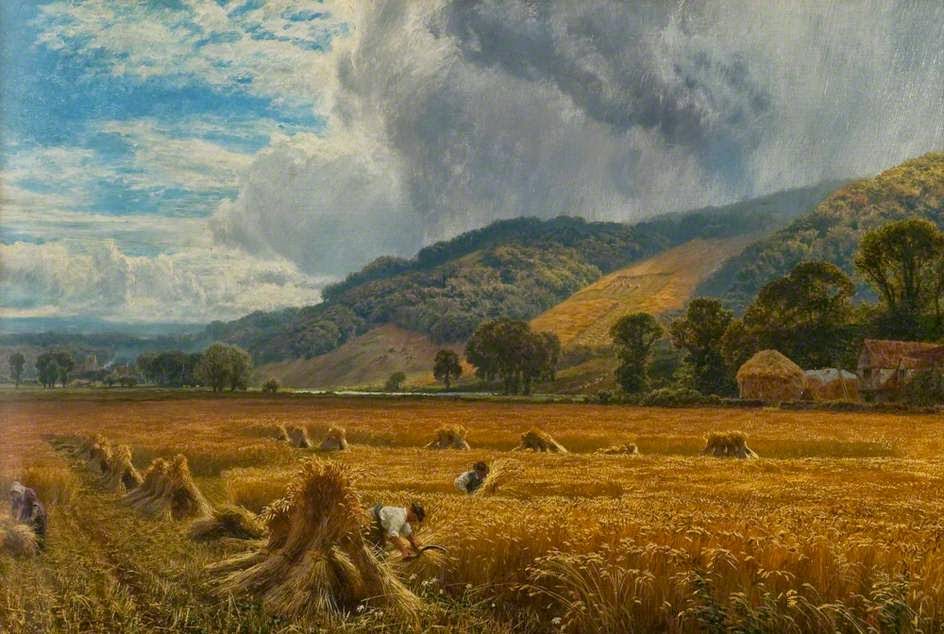 George Vicat Cole, "Harvesting in the Thames Valley" (1888)
Posted by Stephen Pentz at 1:47 AM

Your mention of maples reminded me of this one:

Yes, here in the latter part of August, though the hot sun still scours the world outside my study window, one catches, now and then, as you did on your walk, nuanced signs that fall lurks just over the hill, provisioning itself for its inevitable advance.

Dickinson in the poem below intuits that August contains subtle harbingers of fall, miniscule signs, for aeons verified by the ancient turning of the seasons. August, though it seem puissant, is preparing to surrender--gradually it loses its will to endure. Ripeness is on the verge of falling into ruin; the plump and fecund moment of summer is torpid, longing to sleep. It's job is done. We sense the last fatigued rally of summer, and we discover an old loneliness creeping into our hearts.

How grandly she puts it. When August is "burning low," one can detect, if one carefully looks, "a Druidic Difference / [Enhancing] Nature now."

Further in Summer than the Birds
Pathetic from the Grass
A minor Nation celebrates
Its unobtrusive Mass.

No Ordinance be seen
So gradual the Grace
A pensive Custom it becomes
Enlarging Loneliness.

Fred: thank you very much for sharing the haiku -- it is new to me: lovely. Shiko is new to me as well, but I see looking in my index to Blyth's 4-volume "Haiku" that Blyth has translated eight poems by him -- I'm going to have a look at them.

Anonymous: thank you very much: you capture the feeling of August well. And thank you for the poem by Dickinson, which is very apt -- although I can't say that I fully grasp it! I particularly like: "A minor Nation celebrates/Its unobtrusive Mass."

Very life-enhancing,this blog so thank you to you (and your commentators).

Unknown: thank you very much -- I greatly appreciate your kind words. I'm happy that you found your way here, and I hope that you'll return soon.

I think "Further in Summer" is one of Emily Dickinson's best poems, & in fact would rate it as one of the best poems ever written. It's unusual for her, in that it rather clearly (I think) carries the motif of Mass all through.
I am confined in the city this summer,& miss the sound of crickets more than almost anything else.
Susan

Susan: It's very nice to hear from you again.

Thank you for your comments on Dickinson's poem. I am, I confess, ignorant of Dickinson's poetry, except for what commenters have posted here and what I have come across in anthologies. Much of her poetry leaves me puzzled: which is not a bad thing, mind you -- I feel the same way about a great deal of Wallace Stevens' poetry, and he is one of my favorite poets.

Thus, I think "Further in Summer" is strange and wonderful, but I have only a hint of what it "means." Which, as I say, is perfectly fine. It sounds beautiful.

I know what you mean about the sound of crickets. I heard one the other day on one of my walks, and was very happy. The sound made me long for the sound of cicadas, from the year I lived in Japan -- the quintessential sound of summer over there.

Thank you again. I hope all is well.

I have to pursue this to ask if in Oregon you have the degree of cricket sound that exists in New England in late summer -- late August till the last solitary ones in early October. It is more than a chorus -- anywhere there is long grass it possesses the air & is in the background from dawn to dusk. If you had experienced this I think the poem would seem far from obscure, but an amazing evocation of a phenomenon of nature.
Susan

A few crisp sunny mornings here in NE Scotland have indicated that Autumn is definitely upon us here. Now, I am running slightly behind your thread with this, but, since your Housman musings coincided with the centenary of the beginning of the Great War, I thought you might be interested in something I discovered today: that Patrick Shaw-Stewart wrote 'I met a man this morning' on the fly-leaf of his copy of 'A Shropshire Lad'.

Out here (I'm in Washington (Seattle), by the way, not Oregon), we don't have choruses of crickets, merely a stray one here and there in a meadow. But I do remember cricket choruses from growing up in Minnesota and from traveling in the South. But what sticks most in my mind along these lines is the cicadas ("semi" in Japanese) in summer in Japan during the year I lived there. Wonderful.

You are exactly right: the poem is much less obscure now -- but still mysterious!

Thank you very much for that follow-up thought.

Girders: thank you very much for the reference to Patrick Shaw-Stewart and his poem. You are not behind at all: I appreciate your taking the time to point it out, since I wasn't aware of it. Looking into it further as a result of your comment, it appears that it may have been his one and only poem (or at least the only one we know about).

Well, given his generation, I suppose it makes perfect sense that he would have taken A Shropshire Lad with him to war, and would have in turn written his poem on the flyleaf. And he was a friend of Rupert Brooke's as well.

Thank you again for sharing this, and for visiting.