I have suggested on more than one occasion that it is the individual poem that matters, not the poet.  Yes, there are poets who stand apart from others, the so-called "major poets":  Wordsworth, Keats, Yeats, and the like.  But individual poems written by "minor," little-known, or largely-forgotten poets are every bit as valuable as any poem written by the eminences who attract much of the attention.

Part of what I attempt (humbly) to do here is save these wayside poems (and the poets who wrote them) from neglect, for each of them is a potential stepping stone as we cross the stream or the moor, not quite knowing which direction we are headed.

Yes, we should by all means read Yeats and Keats and Wordsworth.  And long-time (and much-appreciated!) readers of this blog are aware of my affection for, say, Thomas Hardy, Edward Thomas, and Philip Larkin.  But I do not for a moment forget:  "Listen; a clumsy knight who rode alone/Upon a stumbling jade in a great wood/Belated" or "Still are thy pleasant voices, thy nightingales, awake."  Nor would life be the same without: "I long ago/As a child thought the tree sighed 'Do I know/Whether my motion makes the wind that moves me?'" or "Happy were he could finish forth his fate/In some unhaunted desert."  The treasures are endless. 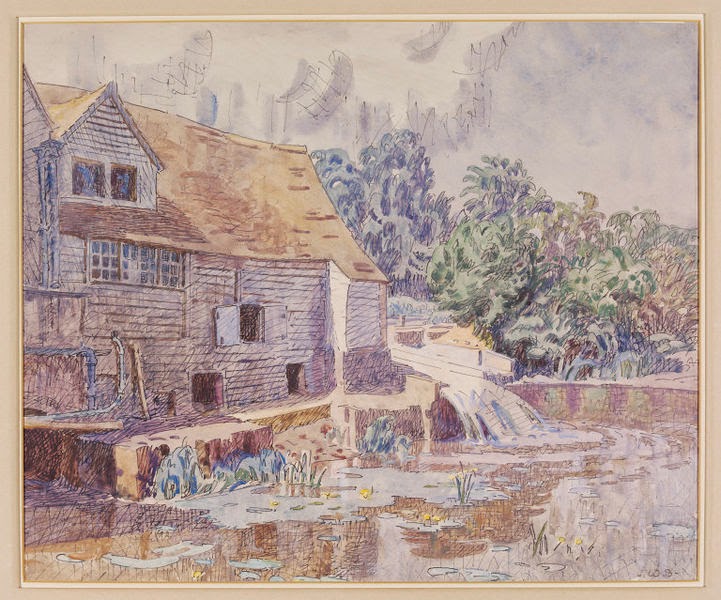 Ivor Gurney, Selected Poems (edited by George Walter) (J. M. Dent 1996). "Other's" (line 6) appears as such in Gurney's manuscript.  It has sometimes been emended (rightly or wrongly, I do not know) to "others'" in later printings. 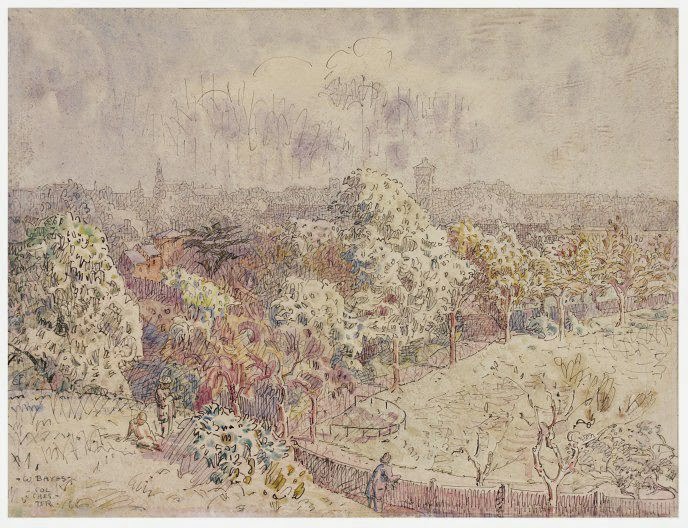 We live in an age in which one can obtain an academic degree in the writing of poetry.  Imagine that!  Card-carrying poetasters, and their poems, proliferate like bluebell meadows in Spring.  Or something like that.  As to what this says about the current state of poetry, I will keep my mouth shut.  Besides, I am still working my way through the poems of the T'ang Dynasty and The Greek Anthology.  I shall not be within hailing distance of contemporary poetry any time soon.

The Poem on the Wall

My clumsy poem on the inn-wall none cared to see;
With bird-droppings and moss's growth the letters were blotched away.
There came a guest with heart so full, that though a page to the Throne,
He did not grudge with his broidered coat to wipe off the dust, and read.

Waley provides this note to the poem:  "Yuan Chen wrote that on his way to exile he had discovered a poem inscribed by Po Chu-i on the wall of the Lo-k'ou Inn."  Yuan Chen was a poet, and one of Po Chu-i's closest friends. Waley dates the poem A.D. 810. 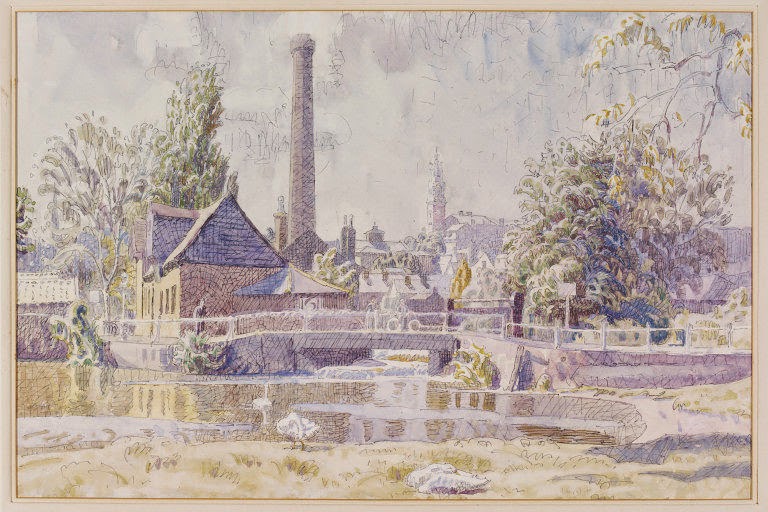 It's odd to hear or read the word "truth" nowadays, isn't it?  Especially in the media or in public discourse.  In those spheres, the word has no content whatsoever.

In this untitled poem by Ivor Gurney, "truth" retains meaning.

Soft rain beats upon my windows
Hardly hammering.
But by the great gusts guessed further off
Up by the bare moor and brambly headland
Heaven and earth make war.

That savage toss of the pine boughs past music
And the roar of the elms. . . .
Here come, in the candle light, soft reminder
Of poetry's truth, while rain beats as softly here
As sleep, or shelter of farms. 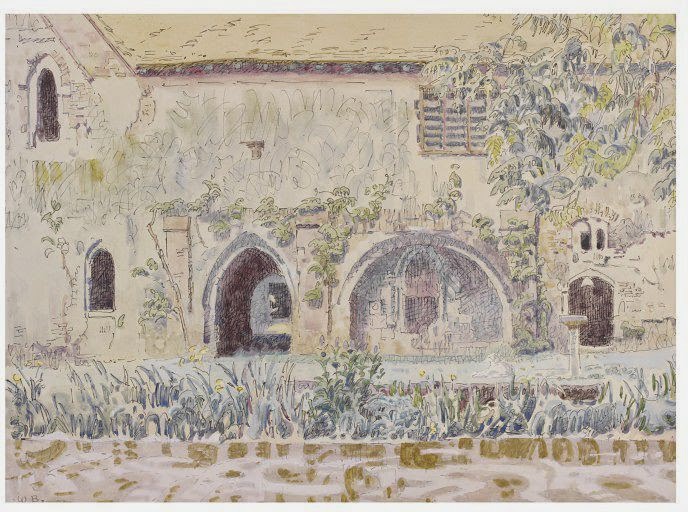 I've been trying to set a poem by Gurney for nearly a year now but due to lack of technique and numbed by bouts of depression I haven't succeded. So I was glad to be reminded of a major composer of art song of our time: Ian Venables set "Soft rain" in his Gurney cycle "The Pine Boughs Past Music" five years ago.
http://www.ianvenables.com/compositions/songs/song-cycle-op39
Unfortunately it hasn't been recorded so far but Ian told me there are plans in the nearby future. A couple of weeks ago Gurney featured as BBC Radio 3 Composer of the week. I hope this interest in Gurney is not just a byproduct of the Great War centenary commemoration industry.

Mr. Richter: it is a pleasure to hear from you again.

Thank you for the reference to Ian Venables' setting of "Soft rain" -- it was you who first introduced me to Mr. Venables' work some time ago, for which I remain grateful, but I wasn't aware of this particular setting. "The Pine Boughs Past Music" is a lovely title for the cycle.

Part of the interest in Gurney is no doubt due to the centenary, but I think interest in him has been rising for quite some time, in terms of both his poetry and his music.

For instance (as you probably know), Professor Tim Kendall and Philip Lancaster (both of whom, I am pleased to say, have posted comments here from time-to-time) are preparing a multi-volume edition of Gurney's poetry for Oxford University Press. They began working on it well before the centenary, and it is my understanding that it will be published soon. It must be a formidable task, given the large amount of manuscript/typescript documentation available, and they deserve our hearty thanks for what they have undertaken. (By the way, Professor Kendall hosted a wonderful BBC film on Gurney earlier this year -- again, you may already be aware of this.)

Mr Pentz, one of the delights of First Known When Lost is the discovery of "minor" poets that one had not come across before, or the re-discovery of poets one had neglected or forgotten; Norman Nicholson, Elizabeth Jennings, Charlotte Mew and Leslie Norris are a few names that come into my mind.
Wandering through the pages of my edition of Ivor Gurney's Collected Poems (edited P J Kavanagh 1982)I came upon the following poem. I'm sure you know it well, but given that it is written by Gurney and mentions Edward Thomas I thought it would be worth posting,particulary given today's date I hope you don't mind.


She was a village

The high roads left her aside, she was forlorn, a maid —

Water ran there, dusk hid her, she climbed four-wayed.

Water ran, was a centre of silence deep,

Hallowed an upward gaze in pale satin of blue.

And I was happy indeed, of mind, soul, body even

Doubt, not many have seen,

That Will Squele he knew and was so shriven.

Borrow and Hardy, Sussex tales out of Roman heights callen.

No madrigals or field-songs to my all reverent whim;

Till I got back I was dumb.

Bless you for this noble undertaking, for bringing notable poems to our attention, and the paintings too. I read several of your posts including the "we must love one another or die" dilemma. It seems impossible to retrieve or delete words or poems once published.

Mr Ashton: thank you for the kind words. Of course, I am always having to remind myself not to neglect the poets I hope to call to the attention of others -- as you suggest, and as you and I have discussed in the past, we often inadvertently fail to revisit some poets as often as we ought to.

Thank you as well for Gurney's lovely poem -- as you say, it is very appropriate given today's date.

As ever, I appreciate hearing from you.

Terra: I greatly appreciate your kind words. Thank you very much.

Yes, once a poem is published, it takes on a life of its own, doesn't it? Auden's attempt to disassociate himself from "we must love one another or die" was wholly unsuccessful. In fact, he simply ended up calling more attention to the poem.

Thank you again, and I hope you will return soon.