A Dream Beneath A Summer Moon

As I have mentioned before, Matsuo Basho (1644-1694) is the Shakespeare of Japan.  Or, to be fair:  Shakespeare is the Basho of England (and the English-speaking world).  Without Basho, haiku likely would not have developed into a serious form of art.  He transformed it from a sort of pleasant diversion -- an element of social gatherings in which sequences of poems were created -- into something else entirely.

This is one of Basho's best-known poems:

an octopus pot --
inside, a short-lived dream
under a summer moon.

Some background information.  "An octopus pot is an unglazed earthenware vessel made for trapping an octopus, which has the habit of escaping into a dark hole when it is alarmed.  Fishermen string a number of these pots on a rope, sink them into the sea, and pull them up after octopuses have entered them."  Ibid.  Basho wrote the haiku while visiting Akashi, a seaside town near Kobe.  The poem bears the heading:  "Staying overnight in Akashi."  Ibid.  Thus, as is the case with nearly all haiku, Basho's verse is based on direct personal experience -- a moment in time. 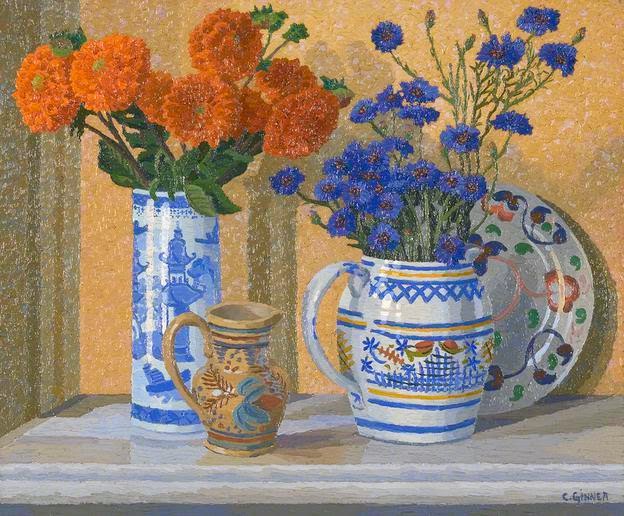 tako-tsubo ya
hakanaki yume wo
natsu no tsuki

Tako is "octopus."  Tsubo is "pot" or "jar."  Ya is a particle of emphasis, akin to "!".  Hakanaki means "fleeting," "transient," "short-lived," or "ephemeral."  Yume is "dream" (as a noun).  Wo can be described as a "noun-following particle marking the direct object of a clause." Kodansha's Romanized Japanese-English Dictionary (1993), page 375.  Natsu is "summer."  Tsuki is "moon."  No is another "noun-following particle," which, in this case, turns the final line into: "moon of summer" or "summer moon."  It all seems fairly simple, doesn't it?  Deceptively simple, as is the case with all good haiku. 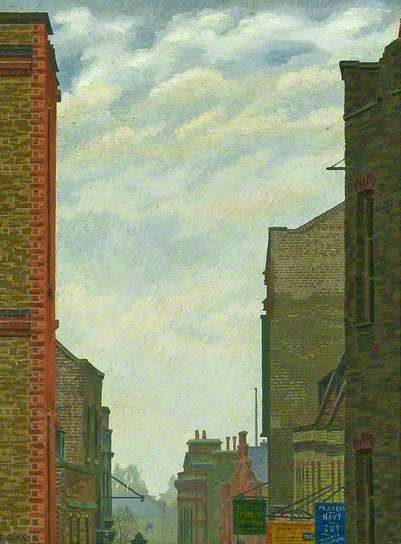 Here are a few other English translations of the haiku, for purposes of comparison.

The octopus trap:
Fleeting dreams
Under the summer moon.

R. H. Blyth, Haiku, Volume 3: Summer-Autumn (Hokuseido 1952), page 41.  When considering the various translations, bear in mind that, in Japanese, there are no plural forms of nouns:  singular or plural is a matter of context.  Nor is there an equivalent to "a" or "the."

The jars of octopus --
brief dreams
under the summer moon.

An octopus pot:
An ephemeral dream
Under the summer moon. 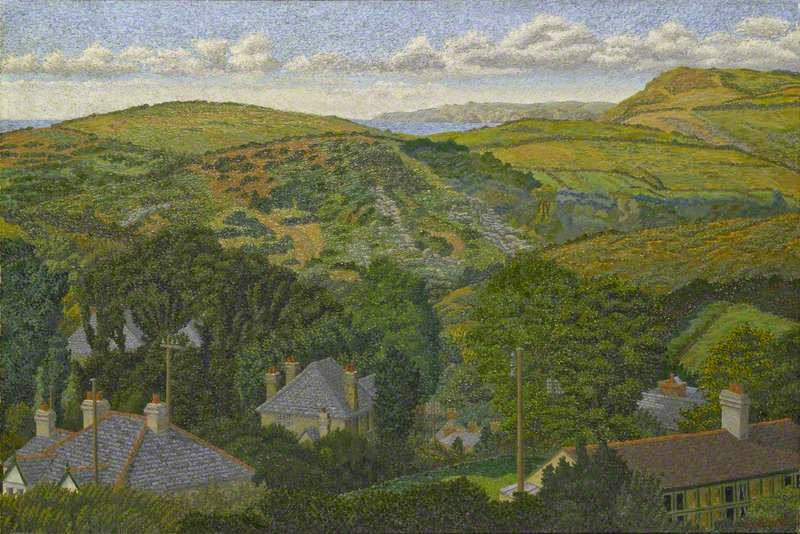 What, then, are we to make of this?  What does it "mean"?  The notion of "explaining" a haiku is one that I resist mightily.  With apologies, I will refer to a recent post:  a haiku is like a moose swimming across a lake and walking off into the deep woods.  Or like the buck emerging from the lake in Robert Frost's "The Most of It."  The moose and the buck are what they are.

Basho is reporting what he saw and felt.  Make no mistake:  there is consummate art in what he does.  But there is no symbolism.  And there are no "tropes" or metaphors or allegories.  Basho's moment is what it is.  But that does not mean that it does not have intimations and implications and depths beyond words. 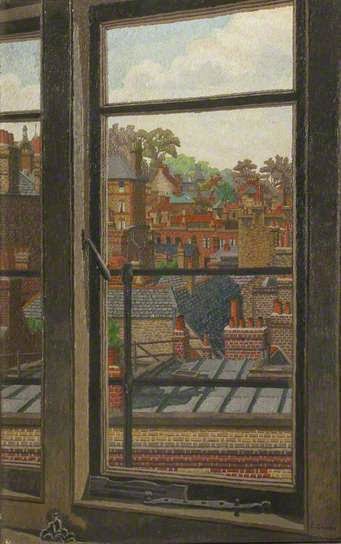 Charles Ginner, "Rooftops"
Posted by Stephen Pentz at 2:52 AM

I may be way off track here, but can the octopus (if present) dream of a summer moon??

E Berris: Thank you very much for visiting again, and for that thought.

As a long-time (and much-appreciated!) reader, you know that I am not one for making pronouncements about the "meaning" of poems. That being said, I'm not sure that Basho intends to anthropomorphize the octopus. I don't claim to be an expert on Basho in particular or haiku in general, but anthropomorphization (is that a word?) rarely, if ever, occurs in haiku. The same holds true for the pathetic fallacy.

I suspect that Ueda's use of "inside" in the second line of his translation may have led to your thought. I am not qualified to second-guess Ueda, who is fluent in Japanese while I am not. However, I think his interpolation of "inside" is questionable given the actual words of the poem.

Sometimes translators of haiku feel a need to add such interpolations because they think that Western readers won't "get it." These interpolations tend to reflect what the translator thinks the haiku "means". However, in my (again, non-expert) experience, this tends to distort the haiku. The simpler the better.

Ueda may well interpret the poem to mean that the octopus is having "a short-lived dream" "inside" the octopus pot. I do not think that Basho, and the poem, are that simple. On the other hand, I wouldn't want to exclude the possibility of dreaming octopuses! Whether they are capable of dreaming of a summer moon is another matter entirely.

Sorry to go on for so long. Thank you again. It's always good to hear from you.

Though it does not take the form of a haiku, would you say that the following poem by Amy Lowell has the tone of one, the brief epiphany revealed in a few words:

Greatly shining,
The Autumn moon floats in the thin sky;
And the fish-ponds shake their backs and flash their dragon scales
As she passes over them.

Anonymous: thank you very much for the poem by Lowell, which is new to me. I agree that it certainly has the tone and feel of a haiku, but it is a lovely poem in its own right.

Coincidentally, last year I read some of her translations of Chinese poems that appear in Fir-Flower Tablets (1921). As I'm sure you know, Lowell and the other "Imagist" poets were strongly influenced by both Japanese and Chinese poetry. I think "Wind and Silver' reflects that influence, but, as I say, stands on its own.

Thank you again for sharing the poem. Please return soon.

Ezra Pound wrote a poem one could consider haikuesque (forgive this abominable word). Pound himself (see below) called the poem "a haiku sentence". I suspect you and your highly intelligent readers are familiar with the poem.

In a Station of the Metro

The apparition of those faces in the crowd;
Petals on a wet, black bough.

The provenance of the poem is interesting. Pound got out of a metro train at La Concorde "and saw suddenly a beautiful face, and then another and another." He says he "tried all day to find words for what this had meant to me." He could not find words "worthy as lovely as that sudden emotion."

Later something came to him: "One idea getting out the impasse in which I had been left by my metro emotion."

He wrote a thirty line poem and destroyed it. Six months later, he says, he wrote a poem "half the length."

He concludes, "A year later I made the following haiku sentence."

Sometimes less is more. One can't imagine a thirty page poem packing the wallop these few words do.

Anonymous: thank you very much for the Pound poem. I agree that it is lovely, and one of his best.

As I think I have noted here before, the pre-Cantos Pound has a great deal to offer. As you know, "In a Station of the Metro" comes from his "Imagist" phase, which particularly reflects the influence of haiku. But I think that the Japanese and, probably more importantly, the Chinese influence is evident throughout a great deal of the pre-Cantos period. (As an aside, I'd also say The Greek Anthology is an influence as well.) As you say: "sometimes less is more." Although I am wont to think: "Less is always more."


Thanks for further elucidation of haiku 'rules'. I think it was both 'inside' as you say, and 'under' in the various translations, precluding dreaming 'of'. I agree with you about not dissecting poetry too much, but I now have happily two co-existing images from your blog - Basho dreaming and an octopus dreaming, even if one interpretation is closer to the poet's intent than the other. Quite enough said, but thanks for your trouble.

The Akashi/octopus poem is wonderful - partly because it is still now, as well. I've been to Akashi as I have friends who live nearby. We went to the fish market and we ate octopus... It is just a beautiful little snapshot which could be centuries ago or yesterday.

E Berris: I hope that I didn't sound overly dogmatic or prescriptive -- and annoying in the bargain! It certainly wasn't my intention to set forth any "rules" regarding haiku! I am no expert, and anything I say is simply based upon my reading.

My remarks about anthropomorphizing and the Pathetic Fallacy should have been tempered by this: Basho and the other haiku poets have tremendous empathy with our fellow inhabitants of the World -- fish and fowl and animal and insect, you name it. Their view is that we are all in this together. This is particularly true of haiku poets (such as Basho) who have a strong Buddhist element in their writing. Thus, most interpretations of the octopus pot haiku by Japanese critics focus on Basho's pity for, and empathy with, the octopus.

As for what I think: from the first time I read the poem, my thought has always been: we are all octopuses in pots, and we don't know it. Yet still we dream away our short summer night of life. But I shall not push that view of the poem on anyone else.

Again, I hope that my response to your comment was not annoying or dogmatic -- that was not my intention.

Ms. Aykroyd: That is a wonderful coincidence. It's nice to think that you've been to Akashi. You're exactly right: the poem was written in the 17th century, but it could have been written today.

Thank you very much for visiting again, and for sharing that connection.

May I just say that John Clare's poem to John Clare is much likelier to be addressed to his son John than to himself. -Greg Crossan. (Love those paintings!)

Mr. Crossan: Thank you very much for visiting. I'm pleased you found your way here, and I hope you'll return.

As for the the Clare poem: I understand your point -- there are different views on it.