Because I am a creature of habit, I return to certain poems at the same time each year.  For instance, I read the following poem by Philip Larkin each May because, um, it takes place in May.  Plus, it is a very fine poem.  Plus, reading any poem by Philip Larkin will put a smile on your face and will make you feel that all is right with the world.  Well, almost any poem.  But don't ever let anyone tell you that he is a "gloomy" poet.  Nonsense.

The trees are coming into leaf
Like something almost being said;
The recent buds relax and spread,
Their greenness is a kind of grief.

Is it that they are born again
And we grow old?  No, they die too.
Their yearly trick of looking new
Is written down in rings of grain. 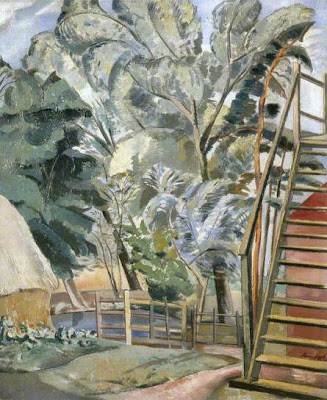 As I have noted before, the last line of "The Trees" reminds me of "The Region November" by Wallace Stevens.  (A poem that I read each -- yes -- November.)  Stevens's poem closes with these lines: 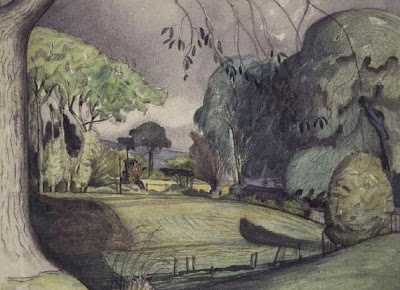 John Nash, "The Thunderstorm"
Posted by Stephen Pentz at 12:10 AM

I like the way you juxtapose Larkin and Stevens (they're juxtaposed on my bedside table too! - and I intend adding Tessimond to them after having discovered him on your blog).

Mr Plant: it is good to have you stop by again. That is a nice pairing: they sort of balance each other out, don't they? Down-to-earth Larkin is a good counterpoint to Stevens's verbal flights.

I'm pleased that you like Tessimond. As you probably know, Bloodaxe Books recently (2010) republished his Collected Poems, so that is the volume to get.

As ever, thank you for your thoughts, which are always appreciated.

Thank you for bringing me back to this poem. After a very wet, drear English Spring, this is a timely reminder!I agree - Larkin is not the misery he is made out to be and always cuts through and hits the spot.

deborah: thank you very much for visiting, and for your thoughts on Larkin. I agree completely!

The "conventional wisdom" about Larkin being gloomy is based upon a few poems (e.g., and most notoriously, "This Be the Verse"), isn't it? I often think that most people who hold the conventional wisdom have not taken the time to read the rest of his poems. Your description is perfect: he "always cuts through and hits the spot."