In the previous post, we heard Ludwig Wittgenstein express skepticism about the nature of "progress" in our time.  In the following poem, Edmund Blunden sounds a similar note:

That you have given us others endless means
To modify the dreariness of living,
Machines which even change men to machines;
That you have been most honourable in giving;
That thanks to you we roar through space at speed
Past dreams of wisest science not long since,
And listen in to news we hardly need,
And rumours which might make Horatius wince,
Of modes of sudden death devised by you,
And promising protection against those --
All this and more I know, and what is due
Of praise would offer, couched more fitly in prose.
But such incompetence and such caprice
Clog human nature that, for all your kindness,
Some shun loud-speakers as uncertain peace,
And fear flood-lighting is a form of blindness;
The televisionary world to come,
The petrol-driven world already made,
Appear not to afford these types a crumb
Of comfort.  You will win; be not dismayed.
Let those pursue their fantasy, and press
For obsolete illusion, let them seek
Mere moonlight in the last green loneliness;
Your van will be arriving there next week. 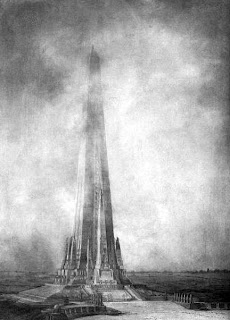 The "Beacon of Progress"
A proposed 1,500-foot-tall structure designed by a professor of architecture from MIT, circa 1900.  It was never built.
Posted by Stephen Pentz at 2:58 AM