Ludwig Wittgenstein Pretends To Be The Moon. Samuel Johnson Rolls Down A Hill.

But I digress.  The purpose of this post is simply to share two wonderful anecdotes that I came across.  They have nothing to do -- on the face of it -- with clarity or cant.  No interpretations or elucidations or theories are necessary.

"Sometimes he came to my house in Searle Street for supper.  Once, after supper, Wittgenstein, my wife, and I went for a walk on Midsummer Common.  We talked about the movements of the bodies of the solar system.  It occurred to Wittgenstein that the three of us should represent the movements of the sun, earth, and moon, relative to one another.  My wife was the sun and maintained a steady pace across the meadow; I was the earth and circled her at a trot.  Wittgenstein took the most strenuous part of all, the moon, and ran around me while I circled my wife.  Wittgenstein entered into this game with great enthusiasm and seriousness, shouting instructions at us as he ran.  He became quite breathless and dizzy with exhaustion."

H. D. Best's account of his visit to the country house of Bennet Langton contains this anecdote relating to a visit that Johnson made to the house in 1764 (when Johnson was 55):

"After breakfast we walked to the top of a very steep hill behind the house.  When we arrived at the summit, Mr. Langton said, 'Poor, dear Dr. Johnson, when he came to this spot, turned to look down the hill, and said he was determined "to take a roll down."  When we understood what he meant to do, we endeavoured to dissuade him; but he was resolute, saying, he had not had a roll for a long time; and taking out of his lesser pockets whatever might be in them -- keys, pencil, purse, or pen-knife, and laying himself parallel with the edge of the hill, he actually descended, turning himself over and over till he came to the bottom.'" 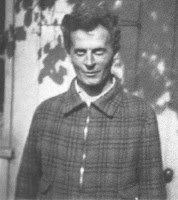 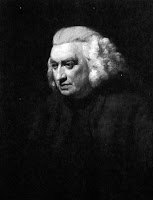 Heh, i was just remembering that passage from Malcolm's little book today, while trying to stride quickly to work, my lungs uncooperative (asthma). What about that amusing jacket old Ludo is wearing in the pic, class or what?

ghostofelberry: I'm surprised (and honored) that you have visited here, and left a comment as well. Thank you very much. I've been following your present and past blogs for quite some time.

Yes, I love that coat, and that antic expression on his face -- is that a grin about to break out?

According to the site where I found the photo, it was taken by Malcolm in Cambridge in 1939. I thought that it fit well with the activity described in the post.

i read that after old Ludo's death Anscombe took to wearing his old suede jacket...slightly disturbing. My own tweed jacket is in a house in Manchester and i mean to pick it up when next i return. Failing that, i believe they have one of Ludwig's tweed jackets in a museum in Austria somewhere, i may take a daytrip down to steal it.

One of my favourite Ludwig photos shows him standing on the veranda of the big country place (Hochreit or something) with Paul and a woman (i think the other sister, Helene), laughing. It's rare to see mirth in the photos, though there is often a kind of grim humour. i think my favourite Ludo memoir is Paul Engelmann's - he relates an anecdote of Ludwig rolling about the floor laughing uncontrollably. Most of the other memoirists see Ludwig through this haze of uncomprehending adoration or fear, but Engelmann was perceptive, and he also writes of the pre-Cambridge days, about which not much is really known.

ghostofelberry: I wholeheartedly agree with you about Engelmann's "Letters from Wittgenstein with a Memoir". It is one of my favorite books about Wittgenstein as well. In addition to being highly entertaining, it is a crucial book for rescuing Wittgenstein from the academic philosophers and other interpreters whom I ranted abouted in my April 30 post "Wittgenstein and 'Progress'".

Engelmann recognized that the academics and interpreters had completely missed the boat and were trying to manufacture a Wittgenstein that never existed. For example, they either ignored or failed to see what Wittgenstein called the "ethical" point of his writing -- not to mention the influence of Tolstoy, etc.

I'll stop before launching into another rant. Thank you again for visiting and commenting.

I believe Elizabeth Anscombe also used to garden in Wittgenstein's raincoat. I was shown it once, hanging in the garden shed. There was an eccentric Irishman called John used to live in the shed for a while. I recall him accosting me at the top of Castle Hill and reciting Yeats's "The Wild Wicked Old Man" to me in its entirety.

Bilby: thank you very much for visiting, and for the anecdotes about Anscombe and John the Irishman -- very interesting! Please stop by again.