I had intended to leave the topic of "progress" after hearing from Ludwig Wittgenstein and Edmund Blunden in the previous two posts.  However, I then recalled a poem by R. S. Thomas that bears on the subject.  (R. S. Thomas being who he was, his thoughts -- as one might expect -- are not exactly cheery.)  With his words, we shall say farewell to "progress" for now.

As life improved, their poems
Grew sadder and sadder.  Was there oil
For the machine?  It was
The vinegar in the poets' cup.

The tins marched to the music
Of the conveyor belt.  A billion
Mouths opened.  Production,
Production, the wheels

Whistled.  Among the forests
Of metal the one human
Sound was the lament of
The poets for deciduous language. 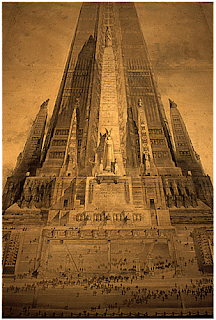 The "Beacon of Progress": A Closer View
Posted by Stephen Pentz at 2:00 AM