Siegfried Sassoon's impressions upon meeting the elderly Thomas Hardy (please see my post of April 16) were not, it seems, uncommon.  The following accounts (which may be found in Edmund Blunden's Thomas Hardy) suggest that encountering Mr. Hardy was indeed a marvelous event.

"The picture drawn by Mr. Powys is memorable.  'Presently I found myself seated near a good log fire.  A little white dog lay stretched on the hearthrug.  Near the chimney-piece I noticed the portrait of Shelley, and on the top of the bookshelf a small bust of Sir Walter Scott.  He came in at last, a little old man (dressed in tweeds after the manner of a country squire) with the same round skull and the same goblin eyebrows and the same eyes keen and alert.  What was it that he reminded me of?  A night hawk? a falcon owl? for I tell you the eyes that looked out of that century-old skull were of the kind that see in the dark.'  And when Mr. Powys went his way, he left Hardy gazing into the October night."

Edmund Blunden, Thomas Hardy (1941), page 159.  The parallels with Sassoon's fireside visit with Hardy ("the wizard of Wessex") are remarkable.  Here is another account:

"To the end of his life Hardy kept some quality of childhood, which caused Mr. H. M. Tomlinson to write, 'Sometimes when talking to him you felt this child was as old as humanity and knew all about us, but that he did not attach importance to his knowledge because he did not know that he had it.  Just by chance, in the drift of the talk, there would be a word by Hardy, not only wide of the mark, but apparently not directed to it.  Why did he say it?  On the way home, or some weeks later, his comment would be recalled, and with the revealing light on it.'"

Ibid, page 273.  In closing, this is from Blunden himself:

"[This] book represents the warm affection which I feel to this day for one of the kindest and brightest of men, one who received the youngest of us without the faintest shade of distance or inequality, and whose memory, even from days all too few of walks and talks, shines steadily through all decline and change." 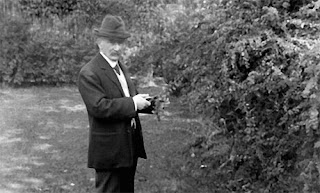 Thomas Hardy in his garden
Posted by Stephen Pentz at 12:48 AM