As the world lurches from one "financial crisis" to the next, who better to turn to than Samuel Johnson in order to put money and wealth into perspective?  Although it is a fool's errand to try to identify one's "favorite" Johnsonian anecdotes, I have long been fond of the one that follows.  (Or, perhaps, it is simply one that remains in my rapidly failing memory.)

The anecdote arises out of a visit made by Johnson to the new villa of David Garrick (1717-1779) at Hampton Court.  Garrick started out as a student of Johnson's in Lichfield.  The two then became friends, and they left Lichfield together for London in 1737.  Garrick eventually became the most celebrated actor in England, and made a fortune.

"Soon after Garrick's purchase at Hampton Court he was showing Dr. Johnson the grounds, the house, Shakespeare's temple, etc.; and concluded by asking him, 'Well, Doctor, how do you like all this?'  'Why, it is pleasant enough,' growled the Doctor, 'for the present; but all these things, David, make death very terrible.'" 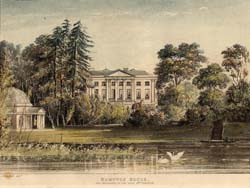 Garrick's Villa
Posted by Stephen Pentz at 9:06 AM