In previous installments of "No Escape," we have seen some opine that, rather than pursuing the longed-for (but ever-elusive) Ideal Place, we should simply look around us.  The following poem does not necessarily say that where we are is, in fact, the Ideal Place, but it does suggest that Right Here is not without interest.

But, John, have you seen the world, said he,
Trains and tramcars and sixty-seaters,
Cities in lands across the sea --
Giotto's tower and the dome of St. Peter's?

No, but I've seen the arc of the earth,
From the Birsay shore, like the edge of a planet,
And the lifeboat plunge through the Pentland Firth
To a cosmic tide with the men that man it.

Robert Rendall (1898-1967) lived most of his life in Kirkwall, Orkney.  He was in the drapery business, but he also wrote poetry and painted.  He was a conchologist whose Mollusca Orcadensia was published in 1956.  I found "Angle of Vision" in  The Oxford Book of Twentieth-Century English Verse -- yet another discovery by the ever-diligent, ever-reliable Philip Larkin. 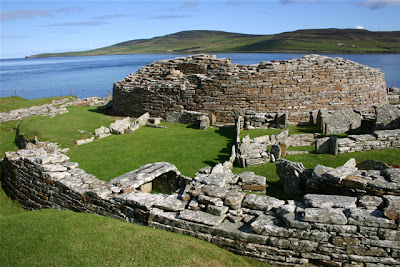 The Broch of Gurness, Orkney

A "broch" is a stone tower that served as a dwelling.  Rendall discovered the Broch of Gurness in 1929 while he was out sketching.  At that time, the area was simply a large earth mound.  One of the legs of the stool on which Rendall was sitting sank into the ground.  He turned over a few stones and came upon a staircase which led down into the mound.  Excavations were undertaken and the broch was discovered.
Posted by Stephen Pentz at 12:10 AM

Seeing this photo made me wonder if had managed your trip to the UK yet? If so, how was it? Weather being v.British at the moment... rain, heat, wind! Greenery currently at it's best though!

Thank you very much for stopping by again, Murgatroyd. Unfortunately, I have not been able to make it over yet. I am now hoping for this autumn, which may make the weather questionable. But, being from the Pacific Northwest, rain and wind won't deter me.

Mr. McMahon: thank you very much for visiting and commenting. Yes, I see what you are saying. I've always thought that it was meant to convey the strangeness and power of the perception -- i.e., the feeling of really seeing something for the first time due to a different, well, "angle of vision."