Laurence Whistler wrote the following poem after his brother's death.

A Portrait in the Guards

So these two faced each other there,
The artist and his model.  Both
In uniform.  Years back.  In training.
Not combatant yet.  But both aware
Of what the word meant.  Not complaining,
But, inwardly, how loth.

They talked of this, perhaps.  Each knew
The other, or himself, might be
Unlucky.  But each knew this true
Of anyone at all.  And so
There was no thrill in it.  A knee
Jigged to the hit-tune of some show.

Each scrutinized the other frankly,
As only painter and sitter do:
Objectively and at leisure.  Face
That must not, please, relax too blankly
Into repose.  And face that threw
Glances, the brush being poised in space.

So both, it may be, had the sense
Of seeing suddenly very plain
A very obvious thing: the immense
Thereness of someone else: a man
Once only, since the world began.
Never before, and never again.

It could be, while a cigarette
Hung grey, each recognized the other
As valid utterly and brother.
It should be so.  Because, of all
Who in that mess-tent shortly met,
These would be first to fall. 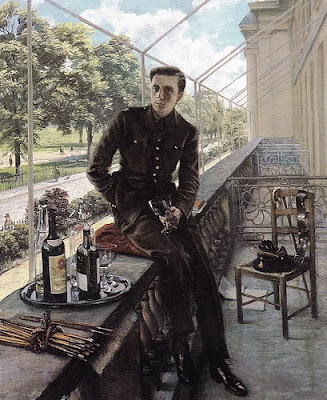 I stumbled across this brief post, which might be helpful for anyone looking into more info for Rex Whistler. Just a teaser, so those wanting even more will just find their appetite whetted: http://www.nam.ac.uk/collection/collection-highlights/rex-whistler

I look at this and the novel image that comes to mind is Parade's End, even though that was 25 or so years earlier.

Showing how trite I am, I find myself trying to figure out the bottle of wine he has on the tray. I suspect claret, out of habit. But I don't recognize the lable, and it reminds me of a Spanish wine...not necessarily a rioja...can it be healthy to wonder over minor points like this?

Dwight: thank you very much for visiting and commenting again. And thank you for the link to the U.K. National Army Museum. I'm pleased that the Museum points out that he was 35 years old when he enlisted -- I was aware of that, and I thought about mentioning it in my post. When I first found that out, I thought of Edward Thomas, who enlisted when he was 36. Neither of them was really "obligated" to go given their age, but still they went.

As for the wine identification: you've got me, since I am not a wine drinker. I understand your curiosity. When I see photographs or paintings with bookshelves in the background, I always search for the titles of the books!