Vanished America, Part Three: "There Will Be No Turning Back"

As I have noted before, the best description of Grant comes from Theodore Lyman (who served as an aide to Major-General George Meade, commander of the Army of the Potomac):  "He is the concentration of all that is American."

It is interesting that this description comes from Lyman:  he was born into Boston high society, graduated from Harvard, and his letters and his journal entries tend to be dismissive of military officers from "the West" (i.e., anyone who did not come from the East Coast).  He considered them uneducated, unsophisticated, and uncouth.  However, Lyman has nothing but good things to say about Grant.  He cannot avoid a bit of condescension now and then, but it is clear that Lyman recognized that he was in the presence of a remarkable man.

In the late summer of 1864, Grant's headquarters were located in City Point, Virginia, on the James River.  On August 6, a munitions barge anchored in the James exploded due to Confederate sabotage.  Lyman wrote this about the incident:

"This morning we heard a heavy explosion towards City Point, and there came a telegraph in a few minutes that an ordnance barge had blown up with much loss of life.  Rosie, Worth, Cavada and Cadwalader were in a tent at Grant's headquarters when suddenly there was a great noise, and a 12-pounder shot came smash into the mess-chest!  They rushed out -- it was raining shot, shell, timbers, and saddles (of which there had been a barge-load near)!  Two dragoons were killed near them.  They saw just then a man running towards the explosion -- the only one -- it was Grant! and this shows his character well."

Although Grant was "noticeably an intrepid man" (Lyman's words again), he had no vainglory about him.  He was quiet, steady, and -- above all else -- supremely imperturbable.  When Grant went east to assume overall command of the Union armies, William Tecumseh Sherman wrote to his brother John (who was a United States Senator):  "Give Grant all the support you can. . . . He will fight, and the Army of the Potomac will have all the fighting they want. . . . His simplicity and modesty are natural and not affected." 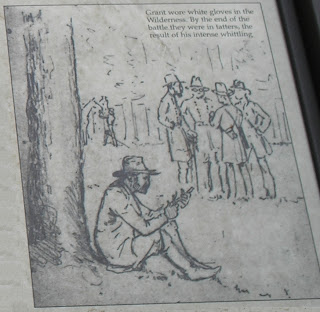 Charles W. Reed
"Grant Whittling During The Battle Of The Wilderness"
May 5, 1864

On the night of the second day of the battle, Grant learned that Henry Wing, a reporter from The New York Tribune, was returning to Washington to file his story on the battle.  Grant took Wing aside, put his hand on Wing's shoulder, and, "in a low tone," said:  "Well, if you see the President, tell him from me that, whatever happens, there will be no turning back."

Wing returned to Washington (a dangerous trip), and he was then brought to the White House to provide whatever information he had about the battle.  (Given the state of communication in those days, information was scarce, even for Lincoln.)  Wing provided a 30-minute report to Lincoln and an assembled group.  As the others left, Wing told Lincoln that he had a "personal word" for him.  Alone with Lincoln, Wing then repeated Grant's message.  According to Wing, "Mr. Lincoln put his great, strong arms about me and, carried away in the exuberance of his gladness, imprinted a kiss upon my forehead."  Henry Wing, When Lincoln Kissed Me: A Story of the Wilderness Campaign (1913), pages 36-39. 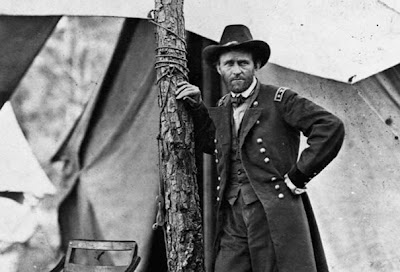 Editions of Grant's memoirs are easy to find these days--the Library of America has a handsome edition, and the Gutenberg Project has it in several electronic formats (handy if you'd rather copy and paste than type out your quotations.) They make wonderful reading.

George: thank you very much for visiting, and for the recommendations with respect to Grant's memoirs. I agree that they are well worth reading.

Tony: thank you for stopping by again. I remembered your comments on my previous Grant post, and I was hoping that you might still be out there.

I agree: Bravo to the likes of Grant and Lincoln! I fear that this goes into the "They Don't Make Them Like That Anymore" category. But perhaps not.