"Well, Well! All's Past Amend, Unchangeable. It Must Go."

The sequence titled "Poems of 1912-13" is generally recognized to be Thomas Hardy's finest sustained poetic achievement.  Hardy wrote the poems after the death of his wife Emma in November of 1912 (when both she and Hardy were 72).  They had been married for 38 years.  In the latter years of their marriage, the two had become estranged -- not in today's legal sense, but emotionally.

The sequence reflects Hardy's sorrow, regret, and self-recrimination after Emma's death.  As the old saying goes, no one except a husband and a wife knows what really goes on in a marriage.  But based upon the biographical evidence (such as it is), fault for the marriage's deterioration would seem to lie (no surprise here) on both sides.  Whatever the "truth" may be, Hardy's regret and self-recrimination were real.

The skeptical and/or the judgmental among us may be tempted to say something along these lines:  "Get over it, Hardy!  If you had treated her right when she was alive, then you wouldn't be suffering regret and self-recrimination now."  To those, I would reply:  you may not wish to read "Poems of 1912-13."  Which, I think, will be your loss.

"The Going" is the first poem in the sequence.  It is a bit too long to post in its entirety, but here is the final stanza:

Well, well!  All's past amend,
Unchangeable.  It must go.
I seem but a dead man held on end
To sink down soon. . . . O you could not know
That such swift fleeing
No soul foreseeing --
Not even I -- would undo me so!

Thomas Hardy, Satires of Circumstance, Lyrics and Reveries (1914).  Hardy dated the poem "December 1912."  The ellipses occur in the original.

This is the third poem in the sequence:

You did not walk with me
Of late to the hill-top tree
By the gated ways,
As in earlier days;
You were weak and lame,
So you never came,
And I went alone, and I did not mind,
Not thinking of you as left behind.

I walked up there to-day
Just in the former way;
Surveyed around
The familiar ground
By myself again:
What difference, then?
Only that underlying sense
Of the look of a room on returning thence. 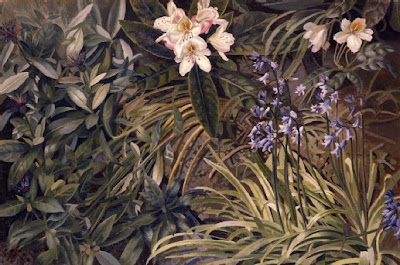 Stanley Spencer
"Bluebells, Cornflowers and Rhododendrons" (1945)
Posted by Stephen Pentz at 12:10 AM

This convinces me I need to read a biography of Thomas Hardy. I remember reading he was in love with another girl, that he based one of his characters on. (Tess?) A lovely and uncharacteristic Stanley Spencer too. I saw an exhibition of his at the Legion of Honor in San Francisco, drove all the way there just to see the Swans at Epping in person. Worth every mile.

Ms. Whitmore: as always, thank you for your thoughts.

The woman you speak of may be Tryphena Sparks, Hardy's cousin. It is unclear what their relationship was, but there has been speculation that Hardy loved her, and may have proposed to her. After her death many years later, he wrote a poem titled "Thoughts of Phena at News of Her Death."

How fortunate you were to have seen the Spencer exhibition!