"Art Is Not Life": R. S. Thomas And Wallace Stevens

I recently posted Wallace Stevens's "This Solitude of Cataracts," which begins with these four lines:

Through many places, as if it stood still in one,
Fixed like a lake on which the wild ducks fluttered.

The third line perhaps shares an affinity with a poem by R. S. Thomas, who wrote more than a few fine poems about streams and rivers.

Taking the next train
to the city, yet always returning
to his place on a bridge
over a river, throbbing

with trout, whose widening
circles are the mandala
for contentment.  So will a poet
return to the work laid

on one side and abandoned
for the voices summoning him
to the wrong tasks.  Art
is not life.  It is not the river

carrying us away, but the motionless
image of itself on a fast-
running surface with which life
tries constantly to keep up.

I haven't looked into what R. S. Thomas thought about Wallace Stevens, but I should.  Thomas did write a poem titled "Wallace Stevens," so he was familiar with his poetry.  This is the final stanza:

There was no spring in his world.
His one season was late fall;
The self ripe, but without taste.
Yet painfully on the poem's crutch
He limped on, taking despair
As a new antidote for love.

"His one season was late fall."  Hmmm . . . I'm not so sure about that. Many of my favorite Stevens poems are indeed set in autumn.  But some might think of him as the poet of winter:  "The Course of a Particular" and, of course, "The Snow Man."  Or "deep January":  "No Possum, No Sop, No Taters."  And then there is March: "Vacancy in the Park" and "Not Ideas About the Thing But the Thing Itself."  And July:  "July Mountain."  As well as August:  "A Rabbit as King of the Ghosts." 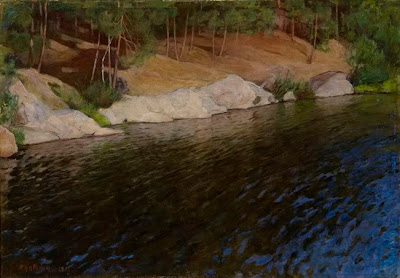 Art is not life--

Thank you very much for visiting and commenting again, Shelley.

Yes, true, but what would we do without it? As Thomas says: "life tries constantly to keep up."

R.S.Thomas's line(s) that 'Art/Is not life', is elaborated further in his acute poem on Camille Pissarro's fine painting of spring blossom - Le Jardin de Maubuisson, Pontoise, printemps (1877, now in La Musee d'Orsay, Paris - you can see it in their online catalogue). The final stanza reads :

Art is recuperation
from time. I lie back
convalescing upon the prospect
of a harvest already at hand.

(first published in his 1981 volume, Between Here and Now)

Thank you for stopping by again, Mr. Noel-Tod.

And thank you for the lines from Thomas's poem on the Pissarro painting. I agree: the lines do throw further light on the lines from "Return," don't they? I tracked down an image of the painting on the Internet: beautiful.

As to the Thomas/Stevens material that you mention, you may contact me at spentzblog@gmail.com. Thank you very much.