"This Is How The Wind Shifts"

I have often stated (ad nauseam by now, I fear) that I prefer the late poetry of Wallace Stevens to his early poetry, with its "Tum-ti-tum,/Ti-tum-tum-tum" ("Ploughing on Sunday") and "But ki-ki-ri-ki/Brings no rou-cou,/No rou-cou-cou" ("Depression Before Spring").  That being said, there is a sparer, more direct (please notice that I say "more direct," not "direct"), and less rococo style sitting side-by-side with these floridities.  For instance, "The Snow Man," "Anecdote of the Jar," "Domination of Black,""The Man Whose Pharynx Was Bad," and "The Death of a Soldier" (to name a few) appear in either the original (1923) or the supplemented (1931) Harmonium.

I place the following poem in the "sparer" category.  Which is not to say that I have ever made head or tail of it.  But it sounds lovely.  And I think I get the drift. 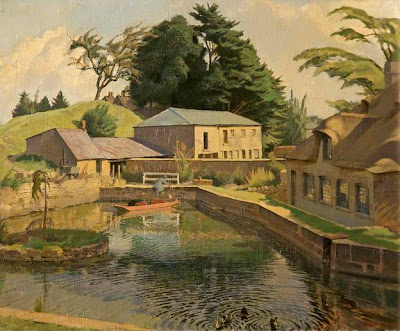